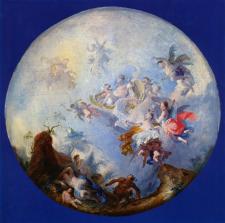 MAULBERTSCH, FRANZ ANTON (1724–1796), Austrian painter, decorator, and graphic artist. Maulbertsch was an Austrian painter, etcher, and decorator active in the second half of the eighteenth century. Though a major figure comparable in scope to Giovanni Battista Tiepolo (1692–1770) and working in the same monumental forms, he is little known outside the central European sphere of his activity. This is symptomatic of the scant scholarly attention given to areas outside the mainstream, notwithstanding the cultural permeability of Europe at the time and the particular vitality of the region itself. With the Reformation contained, if not suppressed, following the Thirty Years' War, and new land recovered from the Ottoman Turks, Central Europe saw explosive growth in church and state during the eighteenth century. Palaces, churches, and monasteries were built and repaired, rebuilt and redecorated in accordance with doctrinal and ceremonial demands that favored grand decorative schemes. Like many other artists of the time, beginning with the Italians, Maulbertsch, who lived in Vienna, traveled from abbey to palace in what is now Austria, Hungary, the Czech Republic, and Slovakia as opportunity arose. Many of his paintings are still in their original locations.

Born in Langenargen on Lake Constance, Maulbertsch, after receiving initial training from his father, Anton, went to Vienna, where he studied at the Academy of Artists, which was then equal to any academy in Europe. An active participant in academic culture throughout his life, he won a first prize in painting there in 1750 and was elected as a member in 1759. He also became a member of the newly formed Print Academy (Kupferstecherakademie) in 1770 and the Berlin Academy of Artists in 1788. The example and work of such Italian artists as Andrea Pozzo (1642–1709) and Carlo Innocenzo Carlone (1686–1775), as well as that of Daniel Gran (1694–1767) and Paul Troger (1698–1762), who had traveled extensively in Italy (principally to Venice and Naples, but also to Rome and Bologna), helped to prepare Maulbertsch for his large-scale decorative commissions. These began with the Piarists' church in Vienna in 1752–1753 and continued nearly annually thereafter. In the decade of the 1750s, for example, he painted frescoes for the Jesuit Church in Vienna in 1753–1754; for the Schloss Suttner, Ebenfurth (Lower Austria), in 1754; for Heiligenkreuz-Gutenbrunn (Austria) and Sümeg (Hungary) in 1757 and 1758; for Mikulov/Nikolsburg and Kroměříž/Kremsier (both now in the Czech Republic) in 1759; and so forth. The intensity of his activity diminished only in the decade before his death in 1796. He executed works for parish churches and religious orders (the Servites, Augustinians, Barnabites, Jesuits, Premonstratensians, Carmelites, and Cistercians), for prelates and archbishops, and from 1765 for the imperial family.

In the course of covering the walls, ceilings, and vaults of churches, cathedrals, chapels, libraries, dining halls, refectories, reception halls, council chambers and other spaces, Maulbertsch developed an expressive pictorial language compounded of light and color for vast illusionistic schemes with and without fictive architecture. The same virtuosic technique of often dazzling brilliance appears in the large altarpieces and easel paintings he executed throughout his career. Although from the late 1760s on he adapted his style to the prevailing classical taste and emerging Enlightenment ideals through a new evenness of light and clarity of form and structure, his later commissions came mainly from the more provincial reaches of the empire. At the end of his life, he made etchings of popular themes that were aimed at new audiences and tastes.

To prepare his works, even the etchings, he regularly employed small preparatory sketches in oil, then a well-established technique but one that he brought to new levels of accomplishment. The sketches range from fully developed models—made for his own or assistants' use and the approval of patrons—to lively composition, figure, and part studies, freely executed in monochrome shades and full colors on paper or small canvases, using the same fluid and spontaneous brushwork that he would employ in the actual work. When they were studies for mural paintings—including the variant typically practiced in Central Europe, which permitted a more varied application of paint and hue than true fresco—they were often made in the winter months when the weather otherwise made it difficult to work. But, having developed out of standard preparatory practice, these oil sketches, which sometimes seem to have been made for their own sake, transcended their origins and came to stand for the newly emerging aesthetic values of creativity that were being formulated by Enlightenment and Romantic writers from Diderot to Goethe. Rapidly laid down with a fully charged brush, such sketches seemed to promise more pleasure to the imagination and, as an apparently transparent means of communication, seemed nearer than the finished painting to the act of creation itself. Thus, if in his monumental decorative schemes and altarpieces Maulbertsch represented the ancien régime that was drawing to a close, in the spirited impasto and evocative forms of his oil sketches, he continued to be a vital force anticipating the values of the century ahead.

The frescoes of Franz Anton Maulbertsch (1724-1796) are the culminating achievement of 18th century Austrian fresco painting. His highly personal interpretation of the rococo gradually gave way to a more rational, classicizing approach.

Franz Anton Maulbertsch was born in Langenargen on Lake Constance on June 8, 1724, the son of a painter. He studied in Vienna with Peter van Roy and in 1741 enrolled at the academy, where he received the painting prize in 1750. Maulbertsch became a member of the academy in 1759 and a professor there in 1770, for which occasion he produced his Allegory of the Destiny of Art.

Although Maulbertsch produced easel paintings of great beauty (Holy Kindred, St. Narcissus, Self-portrait), he is chiefly and justly famous for his frescoes. In Vienna and other cities of Austria, Bohemia, Moravia, and Hungary he created scores of vibrantly dramatic and brilliantly colored frescoes filled with an intense and highly personal religious feeling, beginning with the dome (1752) of the Church of Maria Treu in Vienna. Only the most outstanding can be mentioned here: the frescoes in the churches at Heiligenkreuz-Gutenbrunn (1757) and Sümeg in Hungary (1758), in the archepiscopal palace (1758-1760) at Kremsier (Kroměříž) in Moravia, and in the church (1765; destroyed in World War II) at Schwechat near Vienna. These examples of his early period are characterized by agitated compositions, shifting, fragmented color, and elongated ecstatic figures.

From about 1770 a change in Maulbertsch's style can be discerned, with a calmer, more static composition, cooler color, and clearer contours, all the result of his attempts to adjust to the new classicizing ideas becoming popular at the time. In the paintings in the church at Korneuburg (1773) and the frescoes in the Riesensaal (1775) of the Hofburg in Innsbruck and in Mühlfrauen (Dyje) in Bohemia, he shows the influence of these ideas. In his later works, as in the church at Pápa (1782-1783), the archbishop's palace (1783) at Steinamanger (Szombathely) in Hungary, and the library (1794) at Strahov near Prague, his attempts to vitalize the new rationalistic style with reminiscences of his earlier style do not succeed and result in works of high intellectual complexity and great accomplishment but which lack the emotional and visual appeal of those of his youth.

For all of his frescoes Maulbertsch produced oil sketches, which are among the most prized and popular of his works, filled with the expressionistic qualities associated with his name. The most famous is the Victory of St. James at Clavigo, made for the Schwechat frescoes. His etchings, such as the Allegory of Tolerance (1785), glorifying the edict of toleration of Emperor Joseph II (1781) and the Charlatan and the Peep-show Man (1785), mirrored the new interests in social reform and folklore of the late 18th century. In his Self-portrait (between 1767 and 1794) Maulbertsch created one of the most intriguing, searching Self-portraits in the history of art.

Little is known of the artist's personality, though he was apparently a man of simple, good-natured character, strangely at odds with his very dramatic painting. He lived the life of a quietly successful but not phenomenally wealthy citizen of Vienna. His wife of 34 years died in 1779; they were childless. The next year he married Katherina Schmutzer, the 24-year-old daughter of Jakob Schmutzer, head of the Engravers' Academy in Vienna and his old friend. Two sons were born of this marriage.

Maulbertsch was active in the artistic life of Vienna, participating in academic affairs and helping to found and direct the Pensionsgesellschaft bildender Künstler in 1788, a society created by artists to ensure financial security. He was elected an honorary member of the Academy of Fine Arts of Berlin the same year. While preparing to continue his work at Steinamanger in the decoration of its Cathedral, he died on Aug. 8, 1796, in Vienna, the last of the great Austrian painters of the 18th century, a relic of the rococo in a new epoch in history.

The standard monograph on Maulbertsch is in German. The only work in English to deal with the artist at any length is Eberhard Hempel, Baroque Art and Architecture in Central Europe (1965). □

Painting , painting, direct application of pigment to a surface to produce by tones of color or of light and dark some representation or decorative arrangement… Albert Bierstadt , Albert Bierstadt Albert Bierstadt (1830-1902) was the last of the older generation of American romantic landscape painters. Albert Bierstadt, born in… Andrea Mantegna , Andrea Mantegna (ca. 1430-1506), painter and engraver, was the leading artist of the school of Padua and one of the most important early Renaissance… Fernando Botero , Botero, Fernando Known for his enormous metal sculptures and vibrantly colorful paintings of robust human and animal shapes, Colombian artist Fernand… Frederick Edwin Church , Frederick Edwin Church The works of American painter Frederick Edwin Church (1826-1900) marked the culmination of romantic landscape painting in Amer… Giovanni Battista Tiepolo , TIEPOLO, GIOVANNI BATTISTA (1696–1770), Italian painter, master of Venetian school. Tiepolo was famous in his own lifetime as a superb painter in fre…