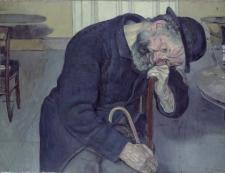 Ferdinand Hodler was born in Bern on March 14, 1853. His childhood was characterized by poverty, sickness, and death. His father died soon after Hodler's birth and his mother died when he was 13; nine of her children likewise died early. Hodler's first training as an artist was in the workshop of his stepfather; in 1867 he began to study with a local landscape painter. In search of better training, he went to Geneva in 1871, where he painted signs while learning French; until 1876 he studied under Barthélémy Menn, who introduced him to the works of Camille Corot, Eugène Delacroix, and J. A. D. Ingres. Hodler was greatly impressed by the paintings of Hans Holbein the Younger, and he studied the theories of Albrecht Dürer, Leonardo da Vinci, and Vitruvius in his search for answers to the artistic analysis of nature. Hodler's artistic formation formally ended in 1878, when he went to Madrid to study the work of Peter Paul Rubens and Diego Velázquez at the Prado Museum.

Hodler's paintings of the 1880s demonstrate a dichotomy of purpose. Although he worked in an impressionist or realistic manner, he sought to impart an intellectual or emotional content that transcended visible reality. In his Prayer in the Canton Bern (1880-1881) he carefully rendered peasants caught up in fervent prayer, simultaneously representing his own spiritual crises and his desire to flee industrialized modern society and find refuge in an innocent, ideal environment.

By 1886 Hodler had begun to paint in a sharply delineated, harsh style touched with rustic awkwardness and simplicity, as in the Courageous Woman. His paintings took on a more emotional quality as they represented moods of anger, despair, or yearning. Night (1889), completed after a serious psychological crisis, marked the final break with realism; it linked him with the symbolist movement then spreading throughout Europe. Night, with its enigmatic dreamlike scene, large format, monumental figures, tendency toward flatness, and repetition of similar colors and forms—a system of composition Hodler named "parallelism"—is characteristic of all Hodler's mature works.

These mystical, antirealistic paintings depicting an escape from the bourgeois cares of modern life gained Hodler first notoriety and then popularity. In 1900 he received a Gold Medal at the Paris World's Fair, and in 1912 he was made an officer of the French Foreign Legion. In Germany he received commissions to create monumental patriotic murals, culminating in the Jena Students Entering the 1813 War of Liberation and the Reformation Oath of Hanover on July 26, 1533 (1913-1914).

Hodler died on May 19, 1918, in Geneva. His formal vocabulary was too personal to act as a major influence, but his antirealistic attitude quickened the demise of naturalism and impressionism.

There is a short biography of Holder in Werner Haftmann, Painting in the Twentieth Century (trans., 2 vols., 1961; rev. ed. 1965). See also Peter Meyer, Art in Switzerland: From the Earliest Times to the Present Day (trans. 1946), and John Canaday, Mainstreams of Modern Art (1962).

Paul Cadmus , Cadmus, Paul American artist Paul Cadmus (1904–1999) was a young and unknown painter in 1934, but he became famous overnight when a minor scandal eru… Rembrandt , Leiden, Netherlands Died: October 4, 1669 Netherlands Dutch artist Rembrandt was one of the most important artists of the great age of Dutch painting… Frank Kupka , Frantisek Kupka (1871-1957) was a Czech painter and illustrator who lived most of his life in Paris. He was one of the first artists to paint abstrac… Hieronymus Bosch , The work of the Netherlandish painter Hieronymus Bosch (1453-1516) is characterized by unusual stylistic originality and an intensely personalized sy… Karel Appel , Karel Appel Born Karel Christian Appel, April 25, 1921, in Amsterdam, The Netherlands; died of a heart ailment, May 3, 2006, in Zurich, Switzerland.… Alfred Sisley , Sisley, Alfred Alfred Sisley (1839–1899) was a key painter of the early Impressionist period, a friend and associate of Claude Monet and Pierre Renoi…