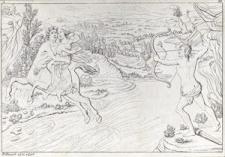 Antonio Pollaiuolo (ca. 1432-1498), Italian painter, sculptor, goldsmith, and engraver, was a master of anatomical rendering and excelled in action subjects, notably mythologies. This "most Florentine of artists" appealed especially to the circle of Lorenzo de' Medici.

Antonio Pollaiuolo was born in Florence. Most of the dated documents refer to his activity as a goldsmith, in which trade he began. The varied nature of his work may be observed in the following commissions: a silver cross for S. Giovanni (1457), a reliquary for the prior of S. Pancrazio (1461), a silver belt and chain for Filippo Rinuccini (1461-1462), two candelabra for S. Giovanni (1465), and the embroidery designs for two tunics, a chasuble, and a cope (1465).

In 1468 Pollaiuolo bought property near Pistoia, and his success as both artist and businessman is attested by the purchase of additional property in and near Florence in the 1480s. In 1472 he was called upon to decorate the helmet of the Duke of Urbino, and that year his name first appeared in the register of the guild of Florentine painters.

Pollaiuolo's monumental Martyrdom of St. Sebastian (completed 1475), his most ambitious painting, is a milestone in Renaissance art in showing muscular figures in action. Other paintings are the tiny Apollo and Daphne, the Rape of Deianira, and the elegant Profile Portrait of a Lady. The famous studies of concentrated muscular energy shown in the panels of Hercules and the Hydra and Hercules and Antaeus are tiny replicas of lost canvases of the Labors of Hercules painted about 1460 for the Medici palace. Pollaiuolo again used the subject of Hercules and Antaeus for a bronze statuette, which, like the damaged fresco painting of the frenetic Dancing Nudes in the Villa la Gallina near Florence, reveals his fanatical interest in the nude in action.

Pollaiuolo also executed one engraving, the famous Battle of the Nudes (ca. 1465). It is a masterful synthesis of his main artistic ideal: the decorative beauty, in violent posturings, of the male nude.

Pollaiuolo's most important commissions for sculpture were executed not in Florence but Rome. He was called, with his artist brother Piero, to the Vatican in 1484 to do the tombs of Sixtus IV and Innocent VIII, masterpieces of bronze casting. Though the former tomb was not finished until 1493, the artist evidently returned to Florence in 1491 to take part in a competition for the facade of the Cathedral. In 1494 he was commissioned to make a bronze bust of Condottiere Gentile Orsini. Pollaiuolo died in Rome.

Leonardo Da Vinci , Leonardo da Vinci (1452-1519) was an Italian painter, sculptor, architect, engineer, and scientist. He was one of the greatest minds of the Italian R… Angelica Kauffmann , Kauffmann, Angelica (1741–1807) Kauffmann, Angelica (1741–1807) Swiss artist who achieved fame and fortune in portraiture and the hitherto male domai… Giorgio Morandi , Giorgio Morandi (1890-1964), widely acknowledged as a major Italian painter of the 20th century, built a reputation based especially on his sensitive… Hieronymus Bosch , The work of the Netherlandish painter Hieronymus Bosch (1453-1516) is characterized by unusual stylistic originality and an intensely personalized sy… Anton Raphael Mengs , MENGS, ANTON RAPHAEL (1728–1779), German painter. The son of Ismael Israel Mengs, court painter to King Frederick Augustus II of Saxony, Anton Raphae… Andrea Del Verrocchio , The Italian sculptor and painter Andrea del Verrocchio (1435-1488) created some of the most powerful monumental bronze sculptures of the Renaissance.…