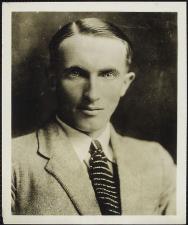 The Fairy-Goose and Two Other Stories. 1927.

The Mountain Tavern and Other Stories. 1929.

Two Lovely Beasts and Other Stories. 1948.

The Wounded Cormorant and Other Stories. 1973.

Liam O'Flaherty is best known for his popular novel The Informer, which also won several Academy awards when it was turned into a film by John Ford in 1935. Later critics, however, tend to maintain that O'Flaherty's permanent literary standing will be based on the stature of his short stories.

His short stories may conveniently be divided into two types—realistic descriptions of rural Irish life and documentary-style sketches of animals. Both of these topics originate from his background of growing up on the primitive Aran Islands off the western coast of Ireland. John Millington Synge described the unique wildness and desolation of these islands "warring" on the inhabitants, and O'Flaherty speaks of the poverty of the farmers and the ever present ocean storms.

One of O'Flaherty's earliest successful short stories is "Spring Sowing," which describes the planting of seeds by the newly married Martin and Mary Delany. The young farm couple participate in this ritual for the first time with their love for each other in full flower. Despite the hard work involved, the seed planting is now a joyful activity, but the author reflects on the future when this work will be burdensome, unrelieved by initial love. The grandfather in the narrative who is badly bent from years of such toil symbolizes the future. Nevertheless, the laborious task is a spiritual joining with the land, a holy link with the soil. At this moment humans are in harmony with nature, but nature will eventually exact its toil.

"Red Barbara" also links the primitive forces of nature with human's own mysterious instincts. The widow Barbara had been married to a barbaric and alcoholic fisherman and conceived several children by him. When she remarries a civil, respectable, hard-working weaver, she finds that he is unable to arouse her passions because he lacks a savagery that she needs. Eventually the situation drives him to his death. Her third husband is like the first. Their passionate sensual natures mingle, and Barbara is once more in harmony with her primitive instincts. She is happily satisfied although she must often lead her inebriated husband to bed. O'Flaherty frequently emphasizes primitive delights and instincts that unhappily, from his point of view, become hampered and restricted by the artificialities of civilization. Humans must remain close to nature and nature's often harsh and vicious realities.

In "The Tramp" the harmony with nature theme is continued. For 22 years the tramp has successfully wandered about the Irish countryside, a happy man in tune with the forces of life. Stopping briefly in a workhouse hostel, he attempts to convince two of the paupers, who are educated and regard themselves as superior to the other residents, to join him on the open road. They cannot, however, surrender their notions of false and pompous respectability even when it means continuing to live in the confinement and limitations of a state-funded poorhouse.

In "The Tent" a traveler during a rainstorm takes refuge with a tinker and his two wives. When, after sharing a bottle of whiskey, the visitor makes a pass at one of the women, the tinker beats him badly, fighting and kicking barbarically. After the traveler is thrown from the tent, he hears the tinker battering the same woman. The occupants of the tent have found their proper niche with nature.

O'Flaherty often appears to be an Irish version of D. H. Lawrence in that "the language of the blood" is paramount in his fiction. The primitive, he argues, should take precedence over civilized overintellectualization. Apart from the influence that the wild and desolate Aran Islands had on his temperament, O'Flaherty was much influenced by the criticism and suggestions of Edward Garnett, who was O'Flaherty's first editor and who had served as an editor for Lawrence. Garnett favored an instinctive, almost animalistic, and very passionate approach to writing.

While admiring nature's sometimes mystical approach to hu-mankind, O'Flaherty nevertheless recognized that nature is ambivalent. In "The Landing," for example, a fisherman's curragh is trapped in a turbulent storm. As the wind and engulfing waves threaten the boat, the fishermen work with equal elemental force to reach shore, and for a time wind, sea, and men blend in struggle. In O'Flaherty's stories nature cannot only dominate and unify but also torment and destroy.

Besides focusing on human's and nature's ambivalent combat, O'Flaherty also writes stories with a calm and reasoned but no less emotional approach. In "Going into Exile," for example, two of the children must leave the farm and immigrate to America to seek employment. A party celebrating the event is bittersweet. The two immigrants are distressed because they have to leave their native land, but there is a sense of adventure that they anticipate with an understated excitement. The parents, on the other hand, can ponder only the melancholy of loss. O'Flaherty effectively encapsulates the sorrow of immigration in a very thoughtful and perceptive manner.

"The Mountain Tavern," in the story so entitled, had always been a place of warmth and convivial joy. It now has been destroyed during the war between the Republicans and the Free Staters. In O'Flaherty's portrayal the ruined building and the snow that covers it symbolize the emptiness and desolation that has prevailed in Ireland through centuries of various military skirmishes.

The second type of short story O'Flaherty writes involves animal sketches. Following editor Garnett's advice to write about what he knew at first hand, O'Flaherty turned to the occupations of the Aran Islands—farming and fishing—as well as to the considerable number of wild birds that inhabit the land and the sea cliffs. He set about to describe these materials in a naturalistic documentary style.

"The Cow's Death" is a fairly typical example. When the cow's calf is stillborn, the dead calf is dragged through several fields and then thrown over a cliff. When the mother eventually recovers from her apathetic confusion of birth, she begins to seek the calf, not realizing that it is dead. She smells the trail of blood and arrives at the cliff where she sees the body of the calf resting on some rocks far below. Her calls to the calf are unheeded, and she seeks a way to descend the steep and rocky cliff. When she sees a larger wave approaching the calf, she attempts to warn the calf, and then in a fit of maternal protection she jumps from the cliff as the calf is pulled by a wave into the ocean. On the surface such a story would appear to be almost a simplistic child's tale, but O'Flaherty's gift for closely observed details and his seriousness of purpose about nature's treachery raise the story to the level of a primitive but highly effective artistic woodcut.

Similar animal sagas constitute much of his work. In "The Wounded Cormorant" the bird's leg is severely injured by a rock accidentally knocked off a cliff by a wild goat. Although it is part of a group, the other cormorants attack and kill it. In "The Water Hen" two roosters fight while the hen settles herself complacently to await and welcome the victor. "The Hawk" portrays the hawk as a conqueror as it kills a lark, but when he attempts to protect his mate's eggs from being stolen by a farmer, he is severely injured by a stinging blow from the man's arm and falls to his death over a cliff. On some occasions the animal is fortunate. In "The Conger Eel" a huge eel is captured unintentionally in a fisherman's net. He struggles and rips the net but is pulled aboard the boat. The men attempt to kill the intruder but he manages to elude them and slip back into the sea.

O'Flaherty seeks to present his cameos without authorial intrusion, but it is evident that he inserts himself imaginatively into his animals, conveying their reactions and feelings, usually in a decidedly convincing manner. The portraits are slice-of-life descriptions of nature at work. Nature is the ultimate author; the writer is only the medium, the depictor of nature in action. It appears that the scenes depicted have actually been observed. The author is a documentary cameraman capturing in detail every minute occurrence.

It must be admitted that many of the animal stories are not successful because, as Frank O'Connor has noticed, the pattern of two-or three-thousand-word sketches describing a single episode can "in quantity" become monotonous. It would have helped too if O'Flaherty's style had been more varied and more lyrical. At times the matter-of-fact vocabulary is realistically appropriate; at other times even closely observed detail cannot compensate for a flat, plain recounting of facts.

As with his stories of rural life, his animal sketches reveal the considerable unevenness in the corpus of O'Flaherty's writings. Admittedly he wrote too much in a furor scribendi, and one seeks in vain for a consistent polished style. The portraits of rural Irish life and the animal vignettes are often naturalistic in tone with intimations of the work of Emile Zola, for whom O'Flaherty professed admiration. At the same time the narratives often contain romantic qualities. As Sean O'Faolain was to observe, O'Flaherty has "the inflated ego of the Romantic, as well as the self-pity and the unbalance." O'Flaherty is unable to give total allegiance to either style, and it is this confluence of the naturalistic with the romantic that gives his writings their unique, distinctive tone.

See the essays on "The Post Office" and "Two Lovely Beasts."