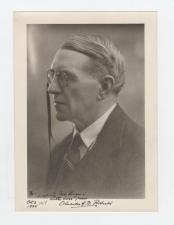 The Canadian poet Archibald Lampman (1861-1899) was one of a loosely defined group of writers known as the "Confederation Poets" whose work represents the first significant literary movement in Canada.

Archibald Lampman was born on Nov. 17, 1861, in Morpeth, Canada West (now Ontario), into a respectable and cultured middle-class family. He was, in part, privately educated, completing his schooling in Cobourg and Port Hope. Lampman graduated in 1882 from Trinity, a constituent college of the University of Toronto.

Lampman's interest in writing and the arts had been aroused under the early tutoring of his clergyman father, and he had written literary essays and poems for his college magazine, Rouge et noir. After graduation Lampman taught school for 3 months, but finding this uncongenial he joined the Post-Office Department in Ottawa in 1883. Four years later he married Maud Playter, and in 1888 his first book of poems, Among the Millet, was published privately in Ottawa. By this time he had achieved a literary reputation, and his work appeared regularly in Canadian periodicals and prestigious American magazines like Harper's, Scribner's, and Atlantic Monthly. In 1895 Lampman was elected a fellow of the Royal Society of Canada, and his second collection of poems, Lyrics of Earth, was brought out by a Boston publisher.

The prime literary antecedents of Lampman lie in the work of the English poets Keats, Wordsworth, and Arnold, but he also brought new and distinctively Canadian elements to the tradition. Lampman, like others of his school, relied on the Canadian landscape to provide him with much of the imagery, stimulus, and philosophy which characterize his work. He was given to extensive and, for him, profoundly significant personal contact with nature, an outdoors pastime which weakened his fragile constitution. As a corollary to his preoccupation with nature, Lampman developed a critical stance toward an emerging urban civilization and a social order against which he pitted his own idealism. He was an outspoken socialist, a feminist, and a social critic. He died on Feb. 10, 1899, while his third volume, Alcyone, was in press.

Acutely observant in his method, Lampman created out of the minutiae of nature careful compositions of color, sound, and subtle movement. Evocatively rich, his poems are frequently sustained by a mood of revery and withdrawal, while their themes are those of beauty, wisdom, and reassurance, which the poet discovered in his contemplation of the changing seasons and the harmony of the countryside.

Octave Cremazie , Octave Crémazie Octave Crémazie (1827-1879) was a Canadian poet who was closely linked to the emergence of French-Canadian literature. Known as Octav… Oliver Goldsmith , The Canadian poet Oliver Goldsmith (1794-1861) is remembered primarily for "The Rising Village," the first book of verse to be written by a native Ca… French Canadian Literature , English A.M. *Klein (1909–1972), the founding father of Canadian-Jewish literature, grew up in Montreal, the birthplace of that body of writing. A po… Margaret Eleanor Atwood , Atwood, Margaret 1939– (Margaret Eleanor Atwood) PERSONAL: Born November 18, 1939, in Ottawa Ontario, Canada; daughter of Carl Edmund (an entomologis… Dudley Randall , Randall, Dudley 1914– Poet, publisher, editor In his roles as poet and publisher, Dudley Randall was the leading exponent of the new black poetry mov… September , Joanne Kyger 1975 "September," by the American poet Joanne Kyger, was first published in Kyger's collection All This Every Day in 1975. It has since…