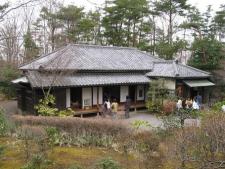 The Japanese novelist and essayist Soseki Natsume (1867-1916) was one of the greatest Japanese novelists of the modern period. In his fiction and essays he displays keen psychological insight into the personality of man undergoing the transition from traditional to modern.

Soseki Natsume was born Kinnosuke Natsume in Tokyo; he is known in Japanese literature by his pen name of Soseki. His parents were rather well-to-do townspeople, whose fortunes, however, declined after the Meiji restoration of 1868. An unhappy childhood, including a period spent with foster parents, and the realization that he was an unwanted child, left an indelible mark on Soseki's imagination which he was to carry to the grave.

Of a studious disposition, Soseki early learned classical Chinese, with much enthusiasm, and English. Entering the university in 1884, he specialized in English literature. During his formative years Soseki was exposed to the growing conflict between excessive Westernization and Japanese nationalism, which no doubt resulted in his being at once very modern and very Japanese. Soseki mastered English to the extent of being able to read and write it with great fluency. At the time of his death his library included hundreds of English-language books on all subjects, many of them containing his marginal annotations in English.

Graduating from the university in 1893, Soseki took a post at Tokyo Normal College and in 1895 went to Matsuyama, where he found a position in the high school. In 1896 he moved to Kumamoto to the Fifth National College. Later that year a marriage was arranged for him with a young woman from Tokyo. In 1900 a government scholarship made it possible for Soseki to go to England for 2 years of study. Unfortunately, his stipend was not adequate for him to lead the life he would have liked. His loneliness in a foreign city, his concern for money, and his arduous studies all contributed to nervous disorders which were to haunt him for the rest of his life. It was even rumored that he had a mental breakdown.

After his return to Japan in 1903, Soseki was confronted with the flood tide of nationalism which was leading to the Japanese attack on Russia. Although he firmly admired the literature of the West, he did not indulge in excessive admiration or slavish imitation of all things foreign but, rather, sought to create something of lasting value based on the traditions of his own country.

Soseki resided in Tokyo, where he was given a lectureship at the Imperial University. During the 4 years that he remained there teaching, a chore for which he had little liking, Soseki began writing novels and acquiring a literary reputation. It was in 1907 that he abandoned the security and prestige of a university professorship to work for the Asahi Newspaper with the understanding that his novels would be published serially in that distinguished publication. From that time until the end of his life he devoted himself to writing, spurning official honors.

Career as a Novelist

Wagahai wa Neko de Aru (I Am a Cat) appeared in 1905. An immediate success, it is a series of loosely connected episodes having as their narrator a cat, his master a shy, ineffectual schoolteacher with a delicate digestion. With delightful irony Soseki depicts an assortment of contemporary types caught in the struggle of daily life and torn between idealism and materialism. Botchan (1906; Young Master) tells of the adventures of a youth who leaves Tokyo to teach in a provincial high school in the south of Japan. It was perhaps partly inspired by Soseki's own experiences in Matsuyama. The young master learns a bit about life, leaves the school, and returns to Tokyo, where he finds a satisfactory job. Kusamakura (Pillow of Grass), written in the same year in a poetic style, was described by Soseki as "a novel in the manner of a haiku." It is an intensely impressionistic account of a painter from the city wandering in a mountain village. Nowaki (1907; Autumn Wind), written in rather a more serious vein, portrays modern people struggling with ideals and suffering intensely in the illusion of this world.

Soseki's next three novels form a trilogy. Sanshiro (1908) tells of a youth's disillusionment in first love and disappointment in life. Sorekara (1909; And Then ) describes the plight of an educated young Japanese in early-20th-century society suffering from hypochondria and boredom. In Mon (1910; The Gate) Soseki deals with the quest for happiness and understanding of a middle-aged, childless couple.

The theme of loneliness is taken up in great depth in Kojin (1912; The Wayfarer) and Kokoro (1914; The Heart). The hero of The Wayfarer is driven to a state of near madness by the realization of his loneliness. In The Heart, Soseki's most pessimistic novel, suicide is presented as the solution to man's inevitable solitude. The Sensei (teacher), having suffered great mental anguish in life, at last finds the courage to be the master of his own destiny by removing himself from this earthly existence. Michikusa (1915; Grass on the Wayside), frankly autobiographical, sums up much of Soseki's own resentment toward life. Its hero, his personality disintegrating, needs love but cruelly, rejects it and feels betrayed by those whose affection and loyalty he should have enjoyed.

Soseki's health was deteriorating rapidly because of stomach ulcers by 1915. His last novel, Meian (1916; Light and Darkness), a most complex analysis of egocentric personalities of the modern age, was left unfinished at his death.

A study of Soseki is in Edwin McClellan, Two Japanese Novelists: Soseki and Toson (1969). □