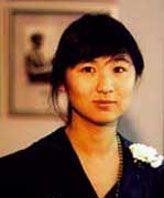 Maya Ying Lin (born 1959) was an American architect whose two most important works in the 1980s were the Vietnam Veterans' Memorial in Washington, D.C., and the Civil Rights Memorial in Montgomery, Alabama.

Maya Ying Lin was born in 1959 in Athens, Ohio, a manufacturing and agricultural town 75 miles southeast of Columbus. Athens is also the home of Ohio University, where both Lin's mother, a poet, and her late father, a ceramicist, taught. The couple fled China just before the Communist Revolution of 1949, leaving behind a prominent family which had included a well-known lawyer and, perhaps significantly, an architect. Lin's family in America includes her mother and an older brother, Tan, who, like his mother, is a poet.

During her childhood Maya Lin found it easy to keep herself entertained, whether by reading or by building miniature towns. From an early age she excelled in mathematics, which led her toward a career in architecture. While in high school Lin took college level courses and worked at McDonalds. She considered herself a typical mid-westerner in that she grew up with little sense of ethnic identity, but admits to having been somewhat "nerdy," since she didn't date or wear make-up and found it enjoyable to be constantly thinking and solving problems.

After graduating from high school, Lin enrolled at Yale to study architecture. Her best-known work, the design for the Vietnam Veterans' Memorial in Washington, D.C., grew out of a class project during her senior year at Yale. In 1981 her entry was chosen out of a field of 1,421 unlabelled submissions in a design competition which was open to all Americans, not just professional architects. Lin was just 21 years old at the time and admits she worried that her professional life had peaked before it had properly started.

Lin's design, in keeping with the competition criteria of sensitivity to the nearby Lincoln Memorial and Washington Monument, the inclusion of the names of all the dead and missing of the war, and the avoidance of political statements about the war, was simple. She proposed two 200-foot-long polished black granite walls, which plunged ten feet below grade to meet at an obtuse angle of 130 degrees. The two arms were to point to the Lincoln Memorial and Washington Monument and to be inscribed with the names of the approximately 58,000 men and women killed or missing in Vietnam. These names were to be listed chronologically, according to the dates killed or reported missing, instead of alphabetically, so they would read, in Lin's words, "like an epic Greek poem." The memorial was dedicated in November of 1982.

The story of the politics surrounding the choice of Lin's design reads like an epic in itself. For the jury, the choice of her proposal was unanimous. Jury chairman Grady Clay described it as "an eloquent place where the simple setting of earth, sky, and remembered names contains messages" for everyone who will visit. The proposal was generally accepted by veterans, but early on a small but vocal minority of veterans and others appeared who attacked the design as "a tribute to Jane Fonda," a "wailing wall for draft dodgers," and "a black gash of shame." Lin's galvanizing design was perhaps best described by one veteran who likened it to a Rorschach test for what each American thinks of the Vietnam War. Such a description suggests that Lin was successful in her intentions to create "a very psychological memorial … that brings out in people the realization of loss and a cathartic healing process."

Maya Lin cited Edwin Lutyens' Memorial to the Missing of the Somme Offensive at Thiepval, France, of 1927-1932, as an influence on her concept of the Vietnam Memorial. This huge, abstract geometric form consists of a central arch flanked by two barrel-vaulted tunnels on which over 70,000 names are inscribed. In addition to Lutyens, Lin has expressed interest in the works of Minimalist artists Dan Flavin, Robert Irwin, and James Turrell, who all experimented with light as an art medium and were pioneers in the anti-object, anti-gallery movement of the 1960s. Turrell's definition of art as a "part of the realm of experience," where each viewer bears responsibility for finding meaning in a work and where each viewer's reaction becomes part of the work itself, could equally be applied to Lin's memorial, with its lack of traditional forms and highly polished black granite surface, which reflects each visitor's unique response to the memorial.

After the Vietnam Memorial project, Lin returned to Yale for a Master's degree. Her later projects included designs for a Philadelphia stage set; a corporate logo; an outdoor gathering place at Juniata College in Huntington, Pennsylvania; a park near the Charlotte, North Carolina, coliseum; and a ceiling for the Long Island Railroad section of Pennsylvania Station. In addition, her lead and glass sculptures have been exhibited at New York's Sidney Janis Gallery.

Maya Lin's second nationally recognized project was the design of the Civil Rights Memorial in Montgomery, Alabama, commissioned by the Southern Poverty Law Center. Lin's conception of the memorial grew out of her admiration of a line in Martin Luther King's "I have a dream" speech, which proclaims that the struggle for civil rights will not be complete "until justice rolls down like water and righteousness like a mighty stream." Water, along with this key phrase from the King years, became her theme. King's words stand out boldly on a convex, water-covered wall which overlooks an inverted cone-shaped table with an off-center base. The surface of this table is inscribed with the names of 40 who died in the struggle for civil rights between 1955 and 1968, as well as with landmark events of the period. This element is also bathed in a film of moving water, which serves to involve the viewer sensually— through sound, touch, and the sight of his or her reflection—while the words engage the intellect.

The two geometric elements of the Civil Rights Memorial, although Minimalist in nature, are not completely devoid of symbolic meaning. Lin has noted that the asymmetrical, cone-shaped table looks different from every angle, a quality which implies equality without sameness— an appropriate sentiment in a memorial to civil rights. Lin says this memorial will be her last and notes that she began and ended the 1980s with memorial projects. She feels fortunate and satisfied to have had the opportunity.

In 1993, Lin created a sculptural landscape work called Groundswell at Ohio State University—a three level garden of crushed green glass. The glass used in the effort reveal Lin's environmentalist nature. Lin remains an active sculptor and architect. In 1997 she began work on a 20,000 square foot recycling plant. Lin currently lives in Vermont. She stays out of the public eye as much as possible. Still, so much of her work is so public and so innovative that publicity is hard to avoid.

While information on the Vietnam Memorial and the controversy surrounding it is legion, Maya Lin's career is young, and thus there is no mass of critical research dealing with her specifically. Most useful in piecing her story together were Jan Scruggs' and Joel Swerdlow's book To Heal a Nation (1985), which briefly discusses Lin and her views, and an article in Time magazine by Jonathan Coleman ("First She Looked Inward," November 6, 1989). On the Vietnam Memorial see Elizabeth Hess, "A Tale of Two Memorials," Art in America (April 1983); Arthur Danto, "The Vietnam Veterans' Memorial," The Nation (August 31, 1985); and Michael Sorkin, "What Happens When a Woman Designs a War Monument?," Vogue (May 1983). On the Civil Rights Memorial see "Civil Rights Memorial Dedicated," in Art in America (December 1989) and David Grogan and Linda Kramer, "Maya Lin Lets Healing Waters Flow Over Her Civil Rights Memorial," People Weekly (November 20, 1989). To read about Lin's current project, the article "The Fifty" appears in Time (December 5, 1994). □

Cache , cache (cache memory) A type of memory that is used in high-performance systems, inserted between the processor and memory proper. The memory hierarch… Vietnam Veterans Memorial , The Vietnam Veterans Memorial is a tribute to the dead of the United States' longest, most unpopular, and least successful war. Like the war itself,… Daniel Ellsberg , Ellsberg, Daniel Chicago, Illinois American political scientist and government official Daniel Ellsberg was a high-ranking government official who he… Nguyen Cao Ky , Nguyen Cao Ky Nguyen Cao Ky Son Tay, Vietnam South Vietnamese military officer and political leader; premier of South Vietnam, 1965–67 Nguyen Cao Ky… Lincoln Memorial , The Lincoln Memorial stands at the west end of the National Mall in Washington, D.C. , as a monument to Abraham Lincoln (1809–1865; served 1861–65),… Memorial Day , MEMORIAL DAY Memorial Day's origins lie in the carnage of the Civil War, which demanded some ritual of remembrance, and in the new rural cemetery, wh…