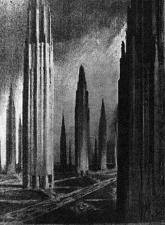 oxford
views updated
Ferriss, Hugh (1889–1962). Distinguished American architectural draughtsman and visionary, his images of skyscrapers in which ornament was suppressed were influential, and best seen in The Metropolis of Tomorrow (1929). His Power in Buildings: An Artist's View of Contemporary Architecture (1953) was an important record of some of his later work. His impact on the development of architecture in the USA in the 1920s was considerable.

Fumihiko Maki , Architect Fumihiko Maki (born 1928) came to prominence in the 1960s, a period of growth and vibrancy in Japanese architecture. Although still identif… Eisa , EISA Acronym for extended Industry Standard Architecture. A bus structure for microcomputers with Intel 32-bit microprocessors, based on and compatib… Architectonic , ar·chi·tec·ton·ic / ˌärkitekˈtänik/ • adj. of or relating to architecture or architects. ∎ (of an artistic composition or physical appearance) having… Carlos Raul Villanueva , Carlos Raúl Villanueva Venezuelan Carlos Raúl Villaneuva (1900–1975) was the most influential Latin American architect and community designer of the… Church (architecture) , church [Gr. kuriakon=belonging to the Lord], in architecture, a building for Christian worship. The earliest churches date from the late 3d cent.; be… Louis Isadore Kahn , Louis I. Kahn Louis I. Kahn (1901-1974) was one of the most significant and influential American architects from the 1950s until his death. His work…