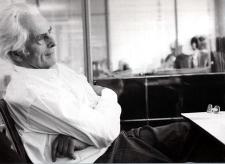 oxford
views updated
Otto, Frei (1925– ). German architect and pioneer of the suspended tent-like roof. He was initially influenced by Expressionism, especially the crystalline fantasies of Bruno Taut, and later by Candela and Fuller, among others, as well as by the possibilities of lightweight aircraft construction (he was in the German Air-Force in the 1939–45 war). His structures were based on traditional tents, but infinitely expanded in terms of shapes and materials. He used cable-nets for the Restaurant Pavilion at the Swiss National Exhibition, Lausanne (1964), and developed the idea (with Rolf Gutbrod (1910–99) and Fritz Leonhardt (1909–99)) for the West-German Pavilion, Expo 67, Montreal (1967), in which prestressed cable-net roofs were used. With Günter Behnisch he designed the Olympiapark, Munich (1967–72), using mathematical methods for determining the structure. His adaptable roof-covering for the Open Air Theatre, Bad Hersfeld, Hesse (1967–8—with Romberg & Bubner), demonstrated how the roof-membrane could easily be moved. Later projects include the Hotel and Conference Centre, Mecca, Saudi Arabia (1971–4—with Arup and Gutbrod); Government buildings, Riyadh, Saudi Arabia (1978–92—again with Arup and Gutbrod); Wilkhahn Furniture Factory Extension, Bad Münder (1986–8); School for Woodland Industries, Hooke Park, Dorset, England ((1988–9—with Ahrends, Burton, & Koralek and others), and the Fachhochschule (Technical High School), Ulm (1991). In 1962–6 he published Tensile Structures (1962–6), Schriften und Reden 1951–1983 (Writings and Speeches—1984), and other works. See also Tensile structures.

Columella , columella 1. In corals, a rod-like structure formed from the swollen axial end of the counter-septum that may occur as a central structure within the… Germans , GERMAN Germany as a nation did not exist in minds or on the map during the early modern era. Each territory of the Holy Roman Empire of the German Na… Equal-area Net , equal-area net (Schmidt-Lamber net) A stereographic net (i.e. a system of coordinates providing a two-dimensional representation of a sphere) used to… Eiffel Tower , Eiffel Tower a wrought-iron structure erected in Paris for the World Exhibition of 1889, designed and built by the French engineer Alexandre Gustave… Hans Scharoun , Scharoun, Hans Bernard (1893–1972). German architect. Sometimes described as influenced by Expressionism, he was actually more eclectic, drawing on i… Bad , bad / bad/ • adj. (worse / wərs/ ; worst / wərst/ ) 1. of poor quality; inferior or defective: a bad diet. ∎ (of a person) not able to do something w…