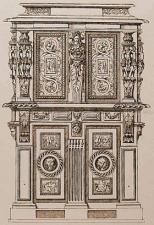 oxford
views updated
Cerceau, Du, Family. Group of French architects and decorators founded by Jacques Androuet Du Cerceau the Elder (1510/12–c.1585), whose Les Trois Livres d'Architecture (The Three Books of Architecture—1559–72) was very influential. The first volume (1559) was essentially a pattern-book of domestic architecture, some of which was influenced by Serlio; the second (1561) contained highly decorated features; and the third (1572) followed the treatises of Philibert de L' Orme and Palladio. These volumes became important sources of grotesque ornament and Mannerist designs in France and Northern Europe. His Les plus excellents bastiments de France (The Most Excellent Buildings in France—1576–9) remains a fine record of French Renaissance châteaux. He has been credited with the design of the château of Verneuil (1568), clearly inspired by Italian design (an important source of motifs) and also influenced by the Italian Mannerists working at Fontainebleau.

Du Cerceau's son Baptiste (1544/7–90) became a major architect working in Paris at the end of C16, and entered the service of the King in 1575. He succeeded Lescot as architect at the Louvre in 1578, completing the west part of the south wing of the Square Court (1582). He made designs for the Pont Neuf (1578), but in 1585 he fled Paris as a Protestant refugee. Baptiste's brother Jacques (c.1550–1614) became architect to King Henri IV (1589–1610) and was very likely responsible for the pavilions in the Place des Vosges. Baptiste's son, Jean (c.1585–c.1649), was appointed architect to King Louis XIII (1610–43) in 1617 having trained with his cousin, Salomon de Brosse, with whom he worked on the Palais du Luxembourg, Paris. He was involved in the development of the Marais and Île St-Louis areas (1620s–1640s), and was responsible for the Hôtel Sully (now Béthune-Sully—1625–9) and the Hôtel de Bretonvilliers (1637–43), in Paris, both extraordinary for their cunningly contrived axes and richly carved decorations. Jean also rebuilt de L'Orme's staircase in the Cour du Cheval Blanc at Fontainebleau with a complicated horseshoe-shaped arrangement.