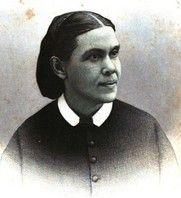 When Ellen Gould Harmon White (1827-1915) was 17, she received a message from God in the form of a vision. It was the first of some 2,000 visions White experienced in her lifetime. The visions formed the basic teachings of the Seventh Day Adventist Church, which White and her husband co-founded in 1863. White served as the church's spiritual leader throughout her life. She wrote 26 books based on her visions, led a health reform movement, and established schools and sanitariums.

White and her twin sister Elizabeth were the youngest of eight children born to Robert and Eunice Harmon. When the twins were born on November 26, 1827, the family lived on a farm near Gorham, Maine. A few years later, Robert Harmon gave up farming and moved the family to Portland, where he worked out of his home making hats. The whole family, including young Ellen, helped in the hat-making enterprise.

An unfortunate incident occurred when White was nine years old. While walking home from school, a classmate threw a rock at White, hitting her in the face and knocking her unconscious for three weeks. White was left disfigured and for the rest of her life she suffered from recurring health problems, including nervousness, tremors, and dizziness. The symptoms made it impossible for her to complete her schoolwork and she was forced to withdraw from school. White considered this incident to be a defining moment in her life; her ill health caused her to become withdrawn and she became deeply interested in religion.

The Harmons were Methodists and in 1840, when White was 12, she attended a church camp meeting where she devoted her life to God, received baptism, and became a member of the Methodist Church. White was devoted to the church, but she feared that she was not worthy of salvation.

During the early 1840s, the Harmon family attended Adventist meetings. The Adventist church was a Christian denomination that believed that the coming of Christ, or advent, was imminent. The Harmons were especially taken with the views of William Miller who predicted Christ's return on October 22, 1844. The conflict between the Methodist and Millerite beliefs resulted in the Harmon family's removal from the Methodist Church in 1843.

October 22, 1844, passed without Christ's return. The event, called the Great Disappointment, caused many Adventists to waver in their faith. White remained earnest and tried to make sense of the failed prediction. In December 1944, while praying with four other women, White experienced the first of many visions she had during her life. The vision showed her that Adventists had misunderstood the significance of October 22. It was the beginning of a special time of preparation that would culminate in the coming of Christ.

When White revealed her vision to others, they accepted it as a gift from God. White had subsequent visions and she began to travel, sharing her visions with other Adventists. She believed that God had selected her as a prophet through whom God would communicate to the world and prepare for Christ's second coming. She helped rally Adventists, who had become scattered after the Great Disappointment.

White was only 17 when she began her mission as God's messenger. She experienced some 2,000 visions in her lifetime. Without warning, she would go into a trance, which began when she shouted "Glory!" three times. If no one caught her, she then swooned to the floor. The trances lasted from a few minutes to several hours, during which time her eyes were open and her heart and respiration rate slowed to an almost imperceptible level. Sometimes she exhibited extraordinary physical strength during the trance. When she came out of it, she sometimes remained blind for a few days. In later years, White's daytime trances stopped and her visions occurred in nighttime dreams.

Skeptics offered various explanations for White's visions. Some believed they were the result of hypnotism. Others thought she suffered from hysteria or other mental disorder. But most Adventist followers accepted her as a prophet who received messages from God. White believed it was her mission to relay the messages she received, although she was somewhat uncomfortable with the responsibility. Although she was young and frail, suffering from breathing difficulties, fatigue, and fainting spells, she traveled to churches and camp meetings, where she was accepted as a messenger of God.

In her travels, White met James White, a Millerite minister, whom she married in 1846. Like his wife, James had lifelong health problems. The couple traveled throughout the eastern states preaching their message and living off the charity of Adventists they visited along the way. When their children, Henry and James Edson were born, the parents left them in the care of friends so they could continue their mission. Being separated from her children distressed White, but she felt God was calling her to preach.

James White encouraged his wife to write down the messages received in visions and in 1849 the couple began publishing her teachings. The Present Truth was an eight-page semimonthly newspaper containing Ellen White's prophetic views. Later, they published the Review and Herald and Youth's Instructor. White's first book, A Sketch of the Christian Experience and Views of Ellen G. White, was published in 1854. James White was the driving force behind his wife's publishing.

In 1852, the Whites stopped traveling and the impoverished family settled down in Rochester, New York. In 1854, their third child, Willie, was born. White gave birth to her fourth son, Herbert, in 1860. He died three months later.

In 1853, the family moved to Battle Creek, Michigan, where Adventist believers built them a headquarters for their Review and Herald Publishing Company. The following years were spent writing and publishing messages from White's visions, which became the basis of the church's teachings. In 1858, White wrote her most important book, The Great Controversy Between Christ and His Angels and Satan and His Angels. The book was based on a vision and described the war between good and evil and the second coming of Christ. It was the first of four volumes published under the title, Spiritual Gifts.

Up until this time, the Adventists were a scattered, unorganized group of believers. In 1863, the movement that White led was formally organized as the Seventh Day Adventist Church. The name came from the belief, from a vision, that the Sabbath should be observed on Saturday, the seventh day of the week. James White took on much of the church's administrative duties, although he turned down the opportunity to serve as president. Ellen White was the church's spiritual leader.

Shortly after establishing the church, White had a vision that showed the connection between physical health and spirituality. She published a series of pamphlets titled Health, or How to Live that described her guidelines for healthy living. Thus began a lifelong crusade for health reform.

White advocated a strict vegetarian diet that included whole grains and only two meals a day. Butter, tea, and coffee were strictly forbidden as were medicine, tobacco, and alcohol. Hydratherapy, the use of water baths and wraps, was used as a treatment for disease. These were not unique ideas in the mid-nineteenth century. Before the Civil War, preachers and medical doctors advocated fresh air, vegetarianism, and abstinence from tobacco and alcohol as alternatives to traditional medical treatments such as blood letting, blistering, and purging. Medical clinics, called water cures, opened across the country before the Civil War. These health reform ideas were readily available in publications and some people suggested that White took her ideas from medical doctors who had previously published articles on the topic. White claimed that she never read their articles before writing down the ideas she received in visions.

In 1865, a vision inspired White to establish the church's first health institute to care for the sick and to teach preventive medicine in an atmosphere of Adventist spirituality. The Western Health Reform Institute (later the Battle Creek Sanitarium) was established in Battle Creek in 1866. It operated under the direction of John Harvey Kellogg, who later invented Cornflake breakfast cereal and founded the Kellogg Company. The institute attracted patients from around the world. The sanitarium left the control of the church in 1906 following a dispute between White and Kellogg.

Despite the fact that health reform was a defining characteristic of the church, the White family continued to suffer health problems throughout their lives. Henry White died of pneumonia at the age of 16 in 1863.

During the 1870s, the Whites traveled extensively on behalf of the church. Much of their work was in the west, where they established Pacific Press Publishing Association. White spoke at camp meetings, churches, conferences, in town squares, and even prisons. Temperence was a frequent topic and in 1877 it was reported that White spoke on that topic to an audience of 20,000 people in Groveland, Massachusetts.

James White's health deteriorated in the late 1870s and he died on August 6, 1881. White became even more involved in the church and her son Willie took on more responsibilities. In the 1880s, White began spreading the Adventist message worldwide. She traveled to Europe in 1885-1889 and lived in Australia for nine years beginning in 1891. White established a bible school and a sanitarium in Australia.

When she returned to the United States at the age of 71, she moved to Elmshaven, a rural town in northern California, from which she traveled throughout the South preaching to African Americans. She founded Oakwood College, a school for African Americans, in Huntsville, Alabama, and established the Southern Publishing Association in Nashville, Tennessee.

White spearheaded a reorganization of the church in 1901. In 1903, she moved its headquarters from Battle Creek to suburban Washington, D.C. She also established medical schools to train doctors for the church's health facilities. In 1909, she founded the College of Medical Evangelists at Loma Linda, California, which is now Loma Linda University and Medical Center. White continued writing, completing a number of books and articles between 1910 and 1915. In total, White wrote 26 books and numerous articles and pamphlets. Together with her diaries and other writings, she produced more than 100,000 pages in her lifetime.

In February 1915, White broke her hip in a fall. She was confined to a wheelchair and died five months later, on July 16, 1915, in Elmshaven, California, at the age of 87. She was buried beside her husband and sons in Battle Creek, Michigan.

After White's death, the Seventh Day Adventist Church continued to grow and draw inspiration from her teachings. Church membership increased from 135,000 in 1915 to more than 12.3 million in 2001. The church's network of schools and hospitals has also expanded.

White's books are still considered a major source of inspiration in the church. They've been translated into 320 languages. All are still in print and are available and searchable on the official website of the Ellen G. White Estate, a corporation established in her will, at www.whiteestate.com.