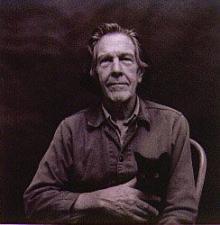 John B. Flannagan was born in Fargo, N. Dak. The father's death, when John was five, left his widow so destitute that she was forced to place her two children in an orphanage. John showed an aptitude for carving even as a boy. However, at the age of 19 he went to Minneapolis to study painting at the Institute of Arts. Three years later he joined the Merchant Marine. In 1922, following release from the service, he headed for New York City to continue his formal art education. Instead, he accepted the offer of painter Arthur B. Davies to work on his farm and receive art instruction from him. Encouraged by Davies, Flannagan decided to become a professional sculptor.

Flannagan went to New York City in 1923 and had his first exhibition. His earliest sculptures were executed in wood, but by 1926 he had begun to use stone, and 2 years later he was using nothing else. He lived in Woodstock and Rockland County. In 1927 he had his first one-man show at the Weyhe Gallery in New York, which awarded him a weekly stipend for sculpture in 1929—an arrangement that lasted until 1937. In 1930 he went to Ireland for a year and went again in 1932 on a Guggenheim fellowship.

Flannagan never embraced the prevailing neoclassical styles required for official, commemorative sculpture commissions. He worked in simple fieldstone because, as he said, "its very rudeness seems to me more in harmony with simple direct statement." Furthermore, he sought to endow his sculpture with a natural quality so that "it hardly feels carved, but rather to have always been that way." In Figure of Dignity (1932-1933) a mountain goat seems to emerge from the stone and appears to be ascending, having halted briefly to look backward. This simple and appealing piece suggests a meaning that goes beyond what is actually represented. Flannagan's art was so unaffected and direct that one cannot detect any outside influences in it, though, like many modern artists, he was influenced by Paul Klee. Flannagan was fascinated by the first stirring of life and the mystery of birth, when numb beings begin to adjust to a strange, and often hostile, world.

In 1937 and again in 1939 Flannagan was in automobile accidents. The latter required four operations, leaving him with a speech impediment and loss of balance. He had great difficulty working, although he made a few pieces cast in bronze. In 1942, on the eve of a retrospective exhibition of his work in New York, Flannagan committed suicide.

Essential to Flannagan scholarship is Letters of John B. Flannagan (1942), which contains an introduction by W. R. Valentiner. The Sculpture of John B. Flannagan, edited by Dorothy Miller and with a brief essay by Flannagan's closest friend, Carl Zigrosser, is the catalog of the Museum of Modern Art's 1942 exhibition. □