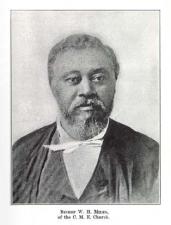 Thomas Edward Watson (1856-1922) was an American political leader in the South. His degeneration from idealism and equalitarianism to racial and religious bigotry is indicative of problems affecting the nation at this time.

Thomas E. Watson was born in Columbia County, Ga., on Sept. 5, 1856, into a wealthy family. His father was ruined by the Civil War, so Tom, emotional and hungry for knowledge, had to leave Baptist Mercer University to work. He taught school unhappily for two years. Then he passed the bar requirements in 1875 and began a spectacular rise as a criminal lawyer.

Watson turned against not only those who had dispossessed his family but those who dominated Georgia politics. Violent and threatening, he accused them of using the state's black citizens as a force with which to divide the poor. He defied the Democratic party and won election to the U.S. Congress in 1890 as a partisan of the Farmers' Alliance.

Although Watson gained fame by reform speeches and congressional proposals, he could not control his state and lost his congressional seat in 1892. In 1896 an agreement between the Populists and William Jennings Bryan, the Democrats' presidential candidate, gave Watson the vice-presidential nomination on the Populist fusion ticket. Neither he nor the Populists gained votes or prestige by this plan.

Watson turned to writing as a career, but his major themes were never far from his politics. The Story of France (1898), filled with rhetoric, saw that nation's progress as a struggle between oppressors and oppressed. His biographies of Napoleon (1902), Thomas Jefferson (1900, 1903), and Andrew Jackson (1912) utilized history and biography to make contemporary points.

In 1904 Watson became the presidential candidate of the nearly defunct Populists. His more than 117, 000 votes attested to his personal popularity, and backers helped him issue Tom Watson's Magazine, which mixed muckraking with a new, unleashed racism. In 1908, his last national campaign year, he took pride in being the only candidate to stand "squarely for White Supremacy." Yet his hatred of finance capital continued to give him the respect of many liberals and socialists. Watson continued to see himself as a "farmer, " but he was actually a man of wealth and many interests.

One of Watson's most notorious causes became "popery, " which he discerned in numerous national and international events. He interceded, too, in the Georgia case of Leo Frank, falsely accused of the murder of a factory girl in Atlanta. Frank's sentence was commuted by the governor. Watson roused his followers with such slogans as "When 'mobs' are no longer possible, liberty will be dead." Frank was taken by force from the state penitentiary and lynched.

Watson was against American entry into World War I, denounced the Espionage and Sedition Acts, and fought conscription. Elected U.S. senator in 1920, he continued to pursue a mixed set of objectives. He died on Sept. 26, 1922, in Washington. Although all did not agree with Eugene V. Debs that Watson was a great man who fought his whole life for the common people, none denied the New York Times's view that he was a "strange and vivid public character."