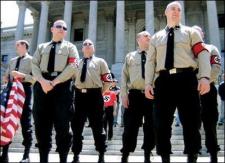 White supremacy—the belief in the superiority of the white race, especially in matters of intelligence and culture—achieved the height of its popularity during the period of European colonial expansion to the Western Hemisphere, Africa, and Asia stretching from the late 1800s to the first half of the twentieth century. White supremacists have based their ideas on a variety of theories and supposedly proven facts; the most prominent of these include the claims of pseudoscientific racist academic research that attempted to correlate inferiority and pathological behavior with categories of racial phenotypes, especially head size in the case of eugenics. White supremacist belief has also been justified by the Biblical Hamitic hypothesis, which viewed blacks as the descendants of Ham who would be cursed for life. There is a direct correlation between the rise of imperialism and colonialism and the expansion of white supremacist ideology justifying the changing international order, which increasingly saw Europeans assuming political control over peoples of darker skin color through military force and ideological means, such as religion and education. It is important to note that the range of those considered “white” expanded considerably in the twentieth century. For example, in the United States, not all ethnic groups with white skin were initially considered white. It was not until well into the twentieth century that the Irish and Italians, for example, were considered white. By the end of that century, the United States federal government had also expanded its definition of whites to include Arabs.

Various groups and institutions have used varieties of white supremacist thinking to organize followers socially and politically, often with the purpose of policing racial barriers. This activism has included, but not been limited to, the physical elimination of nonwhite populations (especially through violence), preventing cross-racial marriage, and maintaining racial segregation. The most well known examples of institutionalized white supremacy were “Jim Crow” segregation in the United States, apartheid in southern Africa, and the Nazi German state under Adolph Hitler, which sought a “final solution” through the extermination in gas chambers of millions of Jews and gypsies, and under which various racial medical experiments were carried out.

The academic field of anthropology has been most closely associated with theories of racial difference, including white supremacy. As anthropology developed as a field in Europe and North America in the 1800s, its epistemological foundations actually provided scholarly legitimacy to the practice of categorizing human beings according to race. In the twentieth century it was also the field that amassed the primary evidence to refute white supremacist thinking. Of particular note as regards this latter phase was the work of Franz Boas, whose fieldwork among North American indigenous peoples provided evidence to refute ideas that races and cultures could be placed in hierarchies that ranged from primitive to sophisticated, with the white race at the top.

After World War II (1939–1945), and the carnage caused by Nazi racial ideology, effort was invested by social scientists to refute white supremacist ideology. Of particular note was the “Statement by Experts on Problems of Race” that the then new United Nations sponsored and had published in the early 1950s. The list of scholars who supported the document comprised the most prominent thinkers on issues related to race at the time, including E. Franklin Frazier, Claude Levi-Strauss, Julian S. Huxley, Gunnar Myrdal, Joseph Needham, and Theodosius Dobzhansky. The central point of the Statement was that race was not based on biological difference and was actually a social construction because all the supposedly different human races belonged to the same species of Homo sapiens.

Due to publications such as the Statement and the mapping of the human genome (which provided additional evidence that there are few significant genetic differences between races), biological justifications for white supremacy popular during the first half of the twentieth century declined in prevalence in the second half. Similarly, by the end of the century all states that had officially declared themselves to be white supremacist had been eliminated. However, white supremacist ideology was resuscitated by a number of social transformations that were particularly evident by the last decade of the twentieth century. These included the end of Communist states in eastern Europe, increased immigration to Europe and North America by nonwhite groups, and the growth of technologies to facilitate rapid transnational communication. White supremacy was deployed by various groups as an organizing tool. In eastern Europe, groups in the former Communist societies used it to create new identities in the wake of communism’s demise, and eastern Europe quickly became the center of neo-Nazi activism. In the United States, groups such as the World Church of the Creator and so-called citizen militias invoked religious and nationalist mythology to rally their believers against the increased power of racialized groups and the presence of illegal immigrants from Latin America. The expansion of the Internet was useful to these hate groups because it facilitated the exchange of documents and enabled the organization of adherents over vast distances. It also allowed some European white supremacy activists to obviate European antiracist propaganda laws that had been enacted after World War II.

The persistence of white privilege, even in societies where nonwhites are the majority, has meant that white supremacy and its consequences have not ceased to be sources of social scientific research. A notable event in the growth of “white studies” was the conference “The Making and Unmaking of Whiteness,” held at the University of California, Berkeley in April 1997. This yielded, four years later, a volume of the same name published by Duke University Press.

In the United States the legal scholar Cheryl Harris, the historian David Roediger, and the American Studies scholar George Lipsitz are among those whose work in white studies has been influential. Melissa Steyn, the South African, has also been a prominent thinker in the area.

White studies is best contextualized as another stage in the evolution of humanities and social science research on the functioning of social systems. One of the most prominent themes in the study of whiteness is identity formation. The argument for doing white studies, and putting it on par with other more established areas of ethnic studies such as black studies, is that the adoption of white identity and the related ideology of white supremacy confer privilege at the expense of others who cannot or will not invest in them.

WHITE SUPREMACY is the belief that members of the Caucasian race are superior in all ways to other groups or races in the world. In the history of the United States, white supremacy has existed as a means of justifying and preserving the nation as a white Christian country. The history of white supremacy is closely tied to the presence of slavery and the emergence, in the eighteenth and nineteenth centuries, of the theories and categorizations of groups and nations into races. In the United States the presence of slavery and its continuance and growth in the South served as a strong foundation for white supremacy. Also important was immigration, first of the Irish and later of eastern and Mediterranean Europeans, which heightened the belief in the superiority of whiteness, defined as White Anglo-Saxon Protestant.

The key group representing white supremacy was the Ku Klux Klan. Founded in Pulaski, Tennessee, in 1866 by Confederate colonel Nathan Bedford Forrest, its aim was to preserve the traditions of the Old South, which for the Klan focused primarily around the suppression of African Americans and the protection of white women. In its evolution during the early twentieth century, the Klan came to stand for "100 percent pure Americanism," a fervent belief in Protestant Christianity, and a staunch opposition to immigration. But still there remained a rock solid belief in the moral, intellectual, and physical superiority of white people. Through the years the Klan fragmented, reemerging at various periods; the largest regrouping occurred after World War I. The Klan arose again in the 1960s and 1970s as the civil rights movement was successfully attaining the desegregation of public accommodations and voting rights for black Americans. In the 1980s and 1990s the Klan once again appeared, but other groups formed in that period which also espoused white supremacy or white power.

A full generation after the successes of the civil rights movement, many white Americans exhibit an increased tolerance of African Americans and a growing acceptance of racial equality. Nonetheless, the ethic of white supremacy is still very strong among some white Americans, namely those belonging or sympathetic to groups formed in the late twentieth century such as Posse Comitatus, the National Association for the Advancement of White People, the American Nazi Party, Aryan Nations, and World Church of the Creator. These groups have tried to recruit young people and have numerous sites on the Internet. They can be violent physically, with most of their attacks directed toward blacks, Jews, and immigrants. Their main goal is to return the nation to white people, root out what they see as a conspiracy between blacks and Jews to eliminate the white race, and regain pride and power for whites.