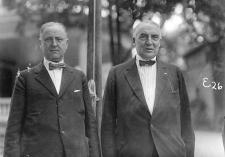 Harry Micajah Daugherty served as the 51st attorney general of the United States, under Presidents warren g. harding and calvin coolidge, but left office with his reputation forever tainted by accusations of political corruption and scandal.

Daugherty was born in Ohio on January 26, 1860, in a town called Washington Court House. He received his law degree in 1881 from the University of Michigan. He moved back to Ohio and was admitted to the state bar. Daugherty began practicing law in his hometown before entering politics. Daugherty became township clerk and, in 1890, was elected to the Ohio General Assembly. The ambitious Daugherty served two terms in the assembly before moving to Columbus in 1894. In Columbus he established a lucrative corporate law practice and continued to build his connections within the republican party. Daugherty ran for state attorney general in 1895 and lost. In 1897, he failed in his attempt to become governor of Ohio.

In 1902, Daugherty established the law firm of Daugherty, Todd & Rarey; he remained a senior member of the firm until his appointment as U.S. attorney general in 1921. Daugherty had become acquainted with rising Republican star

Warren G. Harding, who served as lieutenant governor of Ohio from 1904 to 1905. Daugherty became involved in Harding's campaigns, which included an unsuccessful run for governor in 1910. Daugherty managed Harding's successful campaign for the U.S. Senate in 1914.

At the 1920 Republican Convention, a standoff developed between supporters of the presidential candidacies of former Army Chief of Staff General Leonard Wood and Illinois Governor Frank O. Lowden. Although Harding had introduced no significant national legislation and was not known for his leadership abilities, Daugherty and a group of Harding's political supporters managed to position him as the ideal compromise candidate to break the deadlock. Harding was elected as the Republican party nominee on the 10th ballot and went on to become the 29th president of the United States. In return for his help and support, Harding appointed Daugherty U.S. attorney general in 1921.

U.S. Supreme Court Chief Justice william howard taft, faced with a backlog of cases in the federal courts and efforts by some congressmen to end lifetime tenure for federal judges, had sought judicial reform by proposing the creation of a conference of judges to assess lower court needs. He also suggested the appointment of at-large judges who could be assigned as needed to various courts. Daugherty joined with Taft to urge Congress to pass the proposed legislation. In 1922, Congress established what ultimately became the judicial conference of the united states.

Daugherty and many of the Ohio Republicans who had helped Harding achieve the presidency moved to Washington with him, and became mired in allegations of corrupt self-enrichment schemes. Harding's sudden death in August 1923 and the succession of Calvin Coolidge as president happened just as the public was beginning to become aware of the machinations of those the press dubbed the "Ohio Gang."

Daugherty was acquitted of charges that he was directly involved in the most famous of these scandals, the teapot dome scandal, where the secretary of the interior was accused of arranging for the private development of federally-owned oil fields in return for a bribe of $100,000. However, Daugherty's failure to aggressively prosecute those involved and further allegations that he obstructed justice by trying to block a congressional investigation resulted in a loss of confidence in the attorney general. An investigation led by Democratic Senator Burton K. Wheeler of Montana resulted in Daugherty's resignation in March 1924.

In 1927, Daugherty was tried twice on charges of engaging in graft and fraud while serving as attorney general. Both cases ended in a hung jury. Daugherty spent the rest of his life practicing law in Ohio and attempting to rehabilitate both his own reputation and that of Harding. In 1932, he coauthored a book with Thomas Dixon called The Inside Story of the Harding Tragedy. Daugherty died of a heart attack in Columbus, Ohio, on October 12, 1941, at the age of 81.

Daugherty, Harry M., and Thomas Dixon. 1932. The Inside Story of the Harding Tragedy. New York: Churchill.

James Abram Garfield , Garfield, James Abram GARFIELD, JAMES ABRAM James Abram Garfield was a soldier and congressman who became the twentieth president of the United State… Marcus Alonzo Hanna , Hanna, Mark (1837-1904) Mark Hanna (1837-1904) Changing the G.O.P. Mark Hanna, an Ohio industrialist turned politician, modernized the Republican Par… Samuel Chase , Chase, Samuel CHASE, SAMUEL Samuel Chase served as a justice of the U.S. Supreme Court from 1796 to 1811. In 1804 the U.S. House of Representatives v… Roscoe Conkling , Conkling, Roscoe CONKLING, ROSCOE Roscoe Conkling was for many years in the late nineteenth century the most powerful politician in the most powerful… Midnight Judges , Presidents throughout history have sought to influence law through their judicial appointments. However, the skirmish involving the midnight judges h… John Haynes , SWAYNE, NOAH HAYNES Noah Haynes Swayne served as associate justice of the U.S. Supreme Court from 1862 to 1881. A prominent Ohio attorney for almost…