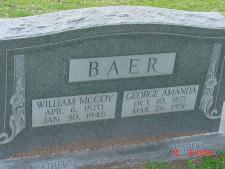 George Frederick Baer (1842-1914) worked closely with legendary financier J. P. Morgan during American industry's most expansionary era. He headed the Philadelphia and Reading Railway Co., which carried coal from Morgan-owned coal mines in Pennsylvania to the cities of the East Coast. Baer is perhaps most remembered for his opposition to labor unions.

Baer was born on September 26, 1842, in Pennsylvania's Somerset County near a town called Lavansville. The family of his father, Major Solomon Baer, had emigrated from Germany and settled in the area in the 18th century. Baer was educated at the local Somerset Institute and the Somerset Academy, and began an apprenticeship at the local newspaper, the Somerset Democrat, as a teen. At the age of 15, he enrolled at Franklin and Marshall College in Lancaster, Pennsylvania. However, Baer left in 1861, when hostilities erupted between the North and South and first shots were fired in the U.S. Civil War. That same year, he purchased the Somerset Democrat with his brother Henry. Its coverage sometimes angered citizens in the area, and its offices were once besieged by a group of protesters determined to destroy its presses. When Henry Baer enlisted in the military, Baer was left to run the paper alone, writing its content and typesetting its pages; in his spare time, he studied to become a lawyer.

In the summer of 1862 Baer organized a company for the 133rd Pennsylvania Volunteers, and the men elected him captain. His unit joined the Army of the Potomac. Over the next year Baer led his men in several charges, including one during the second Battle of Bull Run. They also participated in the Antietam, Fredericksburg and Chancellorsville campaigns. He rose to the rank of adjutant general during his year of service, and then returned to Somerset and his law books. Admitted to the bar in April of 1864, Baer had established himself in a private practice in Reading, Pennsylvania by 1868. He argued one damage suit against the Philadelphia and Reading Railway Company so successfully that his opponent hired him as corporate counsel in 1870. This began Baer's long, and sometimes controversial, tenure with Philadelphia and Reading companies.

It was a prosperous time in American business history for men such as Morgan and Baer, for there were few federal regulations regarding how they operated their businesses, taxes were almost nonexistent, and enormous profits were reaped. Wages and working conditions for the rank and file, however, were often abysmal. There was a growing trade union movement in the country—a development that executives like Baer and Morgan bitterly opposed. In May of 1902, the United Mine Workers of America led 147,000 employees of Pennsylvania's anthracite mining region off the job in protest. The workers petitioned the mine owners and operators for an eight-hour day, instead of a ten-hour one, and complained that they had not had a wage increase in twenty years. The leaders of the union steered clear of the violence that had marked other labor actions in the recent past, which won them some sympathy from newspapers and politicians. Morgan, however, refused to become involved in the public battle in the nation's newspapers. Much of the task was then passed to Baer, who became the focal point for the consortium of mine owners and executives vehemently opposed to the strike. Initially, they were adamant in refusing to negotiate with the union. "We will give no consideration," Baer declared in a statement released to the press, according to the Dictionary of American Biography, "to any plan of arbitration or mediation or to any interference on the part of any outside party."

Baer's prominence in leading the opposition to the strike brought letters from ordinary citizens to his desk. Some supported his hard-line approach to the strikers— whom more conservative elements in American derided as anarchists, communists, or simple malcontents—while others pleaded with him to consider the side of the miners. In the latter camp was a minister from Wilkes-Barre, Pennsylvania, who urged Baer to end the strike. In a letter dated July 17, 1902, Baer responded to it in terms that were construed by many as arrogant and even blasphemous. "The rights and interests of the laboring man," Baer's response allegedly stated, "will be protected and cared for— not by the labor agitators, but by the Christian men to whom God in his infinite wisdom has given the control of the property interests of the country, and upon the successful management of which so much depends."

Baer's letter was reprinted in newspapers across the United States, and caused a minor stir. Editorial cartoons mocked him as a blasphemer, for his statement amounted to the declaration that God had placed men like himself in charge of the mines. Politicians, members of the clergy, and ordinary citizens were outraged; the controversy was seen to mark a turning point in American labor history, helping win more public sympathy for the passage of laws allowing workers the right to organize and to strike. Famed attorney Clarence Darrow dubbed Baer "George the Last," and writer Jack London mentioned it in a footnote in his 1907 science-fiction novel, The Iron Heel. The novel posited that capitalism would evolve into fascism. In one passage, London took American business leaders to task for their greed. "When they want to do a thing, in business of course, they must wait till there arises in their brains, somehow, a religious, or ethical, or scientific, or philosophic concept that the thing is right. … One of the pleasant and axiomatic fictions they have created is that they are superior to the rest of mankind in wisdom and efficiency," London continued. "Therefrom comes their sanction to manage the bread and butter of the rest of mankind. They have even resurrected the theory of the divine right of kings—commercial kings in their case."

Baer later denied the letter's authenticity, asserting that the quotes taken from it were not his words. The anthracite strike still dragged on, however, and there was talk of nationalizing the mines. As the autumn of 1902 approached, East Coast coal supplies dwindled. The obstinacy of executives finally exasperated President Theodore Roosevelt, who intervened and demanded that both sides appear at the conference table. Baer initially stated that he refused to "waste time negotiating with the fomenters of this anarchy," and wanted Roosevelt to call in federal troops to end the strike; but Roosevelt had already stationed troops in the area and was considering using them to take over the mines. Faced with this potentially ruinous loss, Baer complied. A provisional agreement was struck that found the miners back at work on October 23.

Baer was called before the Interstate Commerce Commission in 1903. The American newspaper, owned by William Randolph Hearst, claimed that the Reading and other railroads were actively trying to restrict the output of coal and set the commodity's market price. This placed the companies in violation of a Pennsylvania law, dating from 1874, which stated that no railroad company could engage in mining, nor any coal company own a railroad that exceeded fifty miles in length. Baer claimed that the Philadelphia and Reading Railway Co., the Reading Co., and the Philadelphia and Reading Coal and Iron Co. were each distinct companies and had not violated the letter of the law.

Baer was an avid reader, and sometimes spoke at public dinners. He was known for a quiet demeanor. He was well liked by those close to him, but could be a tenacious and determined negotiator in the business world. His 1866 marriage to Emily Kimmel resulted in five daughters. When he died in April of 1914, his personal fortune was estimated at $15 million.

George Frederick Baer was born September 26, 1842, near Lavansville, Pennsylvania. Baer was educated at Franklin and Marshall College, where he received an honorary master of arts degree in 1875 and a doctor of laws degree in 1886.

During the Civil War, Baer fought on the side of the Union at Bull Run, Antietam, Chancellorsville, and Fredericksburg.

When the United Mine Workers went on strike in Pennsylvania in 1902, Baer gained

notoriety for his lack of sympathy for the plight of the miners.