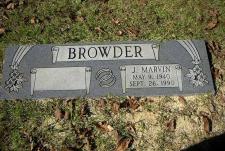 Earl Russell Browder (1891-1973) was the head of the Communist party of the United States during its most influential and prosperous period, 1930-1945. He was the best-known native-born Communist in American history.

Earl Browder was born on May 20, 1891, in Wichita, Kansas, one of 10 children. His father was a teacher in the local schools who had also been a Methodist minister and farmer and whose political convictions were avidly Populist. Browder's formal education ended with the third grade when, because of his father's poor health, he went to work to help support the family. At the age of 15 Browder followed his father into the Socialist party, but within a few years he moved on to the still more radical Syndicalist League of North America, led by William Z. Foster. After working briefly on a Syndicalist magazine, he took a correspondence course in law and became manager of a cooperative store in Olathe, Kansas.

Browder resisted conscription in World War I, like many other political radicals, and as a result he spent 16 months in state and federal prisons. Soon after he left prison, he joined the newly organized Communist party, which was forced to operate clandestinely because of steady government harassment during the "Red Scare" of the immediate postwar years. He also went to work as an editor for Foster's Trade Union Educational League (TUEL) in New York City. In 1921 Browder and Foster represented the TUEL at the Communist-inspired International of Labor Unions in Moscow. Two years later, after the underground Communist party merged with the legal Workers party to form what eventually became the Communist party of the United States, Browder became a top aide to Foster in his efforts to gain the leadership of the new organization.

In 1926 Browder returned to Moscow for another trade union conference and from there journeyed to China as part of an international Communist delegation. In China he edited an underground newspaper for a Communist propaganda agency called the Pan-Pacific Trade Union Secretariat, until shortly before the stock market crash in the fall of 1929. Returning to the United States, Browder helped Foster become general secretary of the party. When poor health soon forced Foster to assume the less strenuous post of party chairman, as Foster's protégé (and perhaps at the behest of the Stalin regime) Browder easily succeeded to the party leadership.

The mild-mannered Browder seemed an unlikely revolutionary. Yet during the 15 years of his leadership, the Communist party gained many new members and considerable respectability, especially within the American intellectual community. Browder managed to ride out several sudden and spectacular changes in the official Communist line that emanated from Moscow. From violent denunciation of the New Deal as the precursor of fascist dictatorship, the party moved in the "Popular Front" period (1935-1939) to temporary cooperation with non-Communist leftists and the New Deal; then in the 20 months following the Nazi-Soviet pact of August 1939, to insistence on strict American neutrality toward the European war; and finally, after Germany invaded the Soviet Union, to wholehearted support for the Roosevelt administration and the American war effort. In 1942 Roosevelt commuted a four-year Federal prison sentence Browder had received two years earlier for falsifying his passport. On the eve of the 1944 presidential campaign, Browder announced that the Communist party, to demonstrate its patriotism and to solidify bipartisan backing for Roosevelt, had been transformed into the Communist Political Association.

At the close of the war the party's membership, boosted by the wartime American-Soviet alliance and the party's apparent patriotic fervor, stood at an all-time peak of more than 75,000. But in the spring of 1945, with the war almost over, the party officially shifted once again, from cooperation with liberal capitalism to militant opposition to both the capitalist system and to the further expansion of United States power in the world. But Browder, an enthusiastic advocate of postwar cooperation with the established order, could not survive this latest shift in Moscow's thinking. That July a special convention of the Communist Political Association repudiated "Browderism," dissolved the association, reestablished the Communist party of the United States, and denied Browder a place on the party's national committee. Early in 1946 the party officially expelled him.

After 1946 Browder, no longer even a rank-and-file Communist party member, continued to live in Yonkers, N.Y., earning a living mainly from writing and occasional editing jobs. His wife, the former Raissa Irene Berkman, whom he had married in Moscow during the 1920s, died in 1955. The Browders had three sons, none of whom followed a political career. The Federal government permitted Browder to live in peace after 1959, when it dropped an indictment returned against him 7 years earlier on the grounds that he had lied on his wife's citizenship application about her membership in the Communist party. Browder died on June 27, 1973, at the home of his son William, in Princeton, New Jersey.