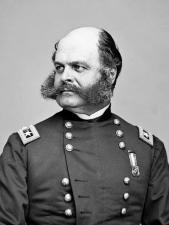 oxford
views updated
Burnside, Ambrose Everett (1824–81) US Civil War general. He participated in the First Battle of Bull Run (1861). Burnside led the Army of the Potomac in the Union defeat at Fredericksburg (1862). He was relieved of command of the 9th Corps following Petersburg (1864). After the war, he was governor of Rhode Island and a senator (1875–81).