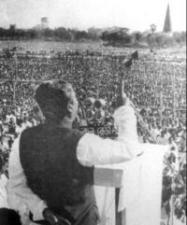 The conflict between East and West Pakistan climaxed after the Dec., 1970, elections, in which the Awami League won a majority. Zulfikar Ali Bhutto, leader of West Pakistan, refused to agree to demands for autonomy, and Mujib was imprisoned in West Pakistan. Civil war broke out in Mar., 1971, when Pakistani troops were sent to put down protests in East Pakistan. With the aid of India, East Pakistani guerrillas proclaimed an independent Bangladesh, and defeated the Pakistani army in late 1971 (see India-Pakistan Wars).

Released in early 1972, Mujib became prime minister of Bangladesh, and worked toward normalizing relations with Pakistan. In the face of growing opposition following a famine in 1974, he pushed through (Jan., 1975) a constitutional change making him president with dictatorial powers, but he, his wife, his sons, and other relatives were slain in Aug., 1975, in a military coup. His daughter, Hasina Wazed, who was abroad during the coup, also has served as prime minister of Bangladesh.