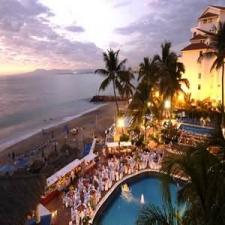 Gustavo Díaz Ordaz (1911-1979) was president of Mexico from 1964 to 1970, a period of considerable world tension. His administration did not escape the turmoil as his government killed several hundred Mexican citizens in the attempt to quell student demonstrations in 1968.

Gustavo Díaz Ordaz was born in San Andrés Chalchicomula (now called Ciudad Serdán), Puebla, on March 11, 1911, the son of a public accountant and a school teacher. His early schooling completed in Oaxaca, Guadalajara, and Mexico City, he returned to his home state, received his law degree from the University of Puebla in 1937, and worked briefly as a public prosecutor.

After teaching law at his alma mater for two years he made his political debut as a congressman from his home state. He served in Mexico's lower house from 1943 to 1946, when he was elected to the senate where he served until 1952. His national reputation began to flower when he was brought into the Secretariat of Gobernación as the director of the Department of Legal Affairs in 1953. Five years later President Adolfo López Mateos named him secretary of gobernación, a position long considered to be a training ground for future Mexican presidents. As a cabinet member he showed himself hyper-sensitive to anti-government demonstrations. In 1959 he crushed a strike of railroad workers and arrested a number of leftist politicians. This was only a preview of things to come. Other leftists, including David A. Siquieros, one of Mexico's most famous 20th century muralists, were jailed (1960-1964) on his orders.

By the time Díaz Ordaz received the nomination of the Partido Revolucionario Institucional for president in 1964 he had established a reputation for dedication, hard work, and efficiency. He was also reported to be the most conservative and most inflexible official party candidate of the post-World War II period. His election to the high office later the same year did nothing to challenge this reputation. The Mexican Revolution, however, had progressed too far to permit any significant change in orientation, especially in matters of foreign policy. When the United States administration of Lyndon B. Johnson intervened militarily in the Dominican Republic in 1965 the anticipated critical response of the Mexican government was forthcoming. Furthermore, in spite of his own personal doubts about the Cuban revolution, Díaz Ordaz refused to honor the diplomatic and economic sanctions voted by the Organization of American States against Fidel Castro's Cuba. Some of the social programs initiated by his predecessors continued. Educational initiatives, for example, received over one-fourth of the total Mexican budget under Díaz Ordaz. But wherever the president could moderate the liberal tendencies of previous heads of state, he did so.

Díaz Ordaz proved himself a good friend of the Mexican business community. As he placed the economic future of the country increasingly in the hands of the private sector, tariff protection on the importation of foreign goods and low interest loans catered to the nation's industrialists. The agrarian sector did not fare as well. Rural poverty prompted peasant invasions of private land in southern Mexico. Rather than address the root cause, the president simply dispatched troops to dislodge the squatters. Industrialization clearly took precedence over agrarian reform.

Discontent with the conservative policies of Díaz Ordaz began to grow noticeably in late 1965 and 1966. University students took the lead in organizing demonstrations against the government. Federal troops were called out to disperse students on campuses in Michoacán, Sinaloa, and Sonora, and a massive strike at the National Autonomous University of Mexico in the spring of 1966 culminated with the resignation of the rector. Each incident heightened political tension within the country, but the major confrontation was still two years away.

When the International Olympic Committee accepted Mexico's bid to host the summer games of 1968, President Díaz Ordaz placed his country's prestige squarely on the line. He planned an impressive "cultural olympics" to coincide with the athletic competition. Hundreds of millions of dollars were pledged to prepare Mexico City for the onslaught of tourists. The president wanted to use the extravaganza to portray Mexico to the world as a stable and prosperous republic. To his chagrin, the result was just the opposite.

The trouble began with a trivial street fight between students from two rival Mexican schools, but the rapid escalation defied imagination. President Díaz Ordaz and General Alfonso Corona del Rosal, mayor of the Federal District, ordered out the granaderos, a despised paramilitary riot force. The granaderos did put an end to the street fight, but in the process they further politicized Mexico City students. During the next several weeks the situation deteriorated as huge demonstrations provoked violence on the streets of Mexico City. The president named his secretary of gobernación, Luis Echeverría, to deal with the angry students, but the negotiations broke down and the students threatened to disrupt the opening ceremonies of the Olympic Games. The climax came on October 2, 1968, in the Mexico City district of Tlatelolco.

The student rally was not large by later standards, perhaps only 5,000. At 6:30 in the evening police units arrived in tanks and armored vehicles. When the demonstrators failed to disband, the granaderos moved in and began to disperse the crowd with billy clubs and tear gas. The shooting began moments later, and before it ended several hundred students were dead. As the violence was blared in the world press, tens of thousands of Olympic-bound tourists cancelled reservations made years in advance.

The national shame that engulfed Mexico following Tlatelolco was much more severe than that of the United States after the 1970 Kent State shooting, a similar incident but one of lesser magnitude. The impact was so severe that when the Díaz Ordaz administration ended in 1970 it was not remembered for any of its accomplishments, but rather for the tragedy of October 2, 1968.

After leaving office, Díaz Ordaz remained politically active with his conservative constituency, and maintained ties with the new government. In 1977, he was appointed Ambassador to Spain, but resigned amid controversy after serving only four months.

He died of a heart attack at his home in Mexico City on July 15, 1979. Conservatives, particularly conservative businessmen, lamented the loss of a proponent of government intervention to quell the social and political protests that continued to plague Mexico.

A critical view of the Mexican political system under Díaz Ordaz is found in Pablo González Casanova, Democracy in Mexico (1970) and in Latin American Perspectives (Summer 1993). The nature of the domestic conflict can be traced in Evelyn P. Stevens, Protest and Response in Mexico (1974) and in Judith Adler Hellman, Mexico in Crisis (1978). □