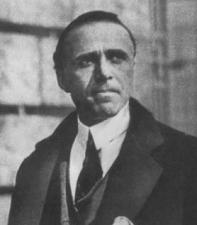 Giacomo Matteoti (1885-1924) was leader of the Italian Socialist Party and bitter and effective critic of Mussolini's dictatorship, whose murder by Fascist thugs led to a crisis that nearly overthrew Mussolini.

Giacomo Matteotti, one of the foremost leaders of Italian socialism following World War I, contested the rise of fascism with courage and eloquence. With his death in 1924, Fascist Italy was soon transformed into a full-fledged dictatorship. On the other hand, the murder of the prominent Socialist stimulated the growth of an anti-Fascist movement that lasted until the overthrow of Mussolini in 1945.

Italy at the start of the 20th century was a recently created country suffering from severe social, economic, and political problems. Unified only in 1861, there remained vast economic and cultural differences between the relatively prosperous northern regions and the poor areas south of Rome. With the unrest in the country's cities, a Socialist Party emerged to help Italy's factory workers. There was even more unrest in the countryside as movements of agricultural workers formed to improve wages and working conditions, but they faced harsh resistance by landowners.

While Socialist leaders promoted a program of reform in the name of the workers, prior to 1914 Italian nationalist leaders like Enrico Corradini spoke of the need to link all Italians together and to carry out a plan of imperial expansion. Universal suffrage was established in 1912, creating a large number of new voters whose future political loyalties were uncertain.

After bitter debate and violent public demonstrations, the Italian government of Giovanni Giolitti entered World War I in the spring of 1915. Both sides in the war bid to attract Italy. Britain and France won over the Italians by promising large postwar territorial gains at the expense of Austria-Hungary. But the war brought massive Italian casualties, disrupted the Italian economy, and resulted in only disappointing territorial gains at the 1919 peace conference. Italian Socialists, inspired by the success of Communist revolution in Russia, were speaking about revolution in their own country.

At the same time, a movement on the political right—a movement called fascism—emerged under the leadership of Benito Mussolini. A former Socialist who had abandoned the Socialist Party in 1914 to lead a movement to bring Italy into World War I, Mussolini now gathered a variety of followers: embittered war veterans, nationalists, opponents of Socialist revolution. The Fascist program mixed calls for radical economic change with a strong devotion to Italian nationalism and opposition to socialism.

Over the years from 1919 to 1922, its program lost some of its radical character. Fascism became dominated by nationalism and opposition to the political left. The party was also distinguished by its use of violence against its political opponents: Socialist meetings were broken up by armed Fascist bands; rival political leaders were beaten; leaders of rural workers' groups were assaulted.

By 1922, fascism gained support from even moderate conservatives who hoped it would be a barrier against Socialist revolution. In the face of bitter opposition from the Socialists, Mussolini came to power as prime minister. His rise to power was technically legal, but the threat of violence stood in the background. He had threatened to lead his movement in a "March on Rome" to force his appointment. In the end, the authorities decided to give in to his wishes without armed resistance, and he headed a coalition cabinet starting on October 31, 1922. But Mussolini was openly contemptuous of parliamentary government. He intended to tighten his control over the country pushing aside opponents of fascism and abolishing the parliamentary system he hated. Matteotti emerged as one of his most effective critics.

Giacomo Matteotti was the son of a prosperous hardware merchant and property owner in the Po Valley. Born in the town of Fratta Polesine in Rovigno province on May 22, 1885, he was attracted to the Socialist movement while he was still in secondary school. He studied law at the University of Bologna and traveled widely inside and outside Italy during his school vacations.

The young man was an enthusiastic scholar of criminal law, and in 1910 he wrote his first book on this subject. Even in this work his Socialist convictions were evident, and he stressed the role of social and economic conditions in producing criminal behavior. Abandoning his plans for a career in teaching, he was elected to posts in municipal and then provincial government.

During the war years, Matteotti, an outspoken opponent of Italy's participation in World War I, rose rapidly as an official of the Italian Socialist Party. He made a national reputation for himself in speeches at the 1916 Party Conference on city government, which dealt with the problems of postwar planning. He was also one of the Party's leading figures in dealing with the problems of rural laborers. In 1922, the Italian Socialist Party split, some of its members moving toward the militancy and authoritarian organization of the Russian Communist Party. Matteotti became the leader of the moderate, democratic Socialist faction, the PSU.

The young Socialist leader was horrified to see fascism emerging as a political force in his home region of the Po Valley. As one friend put it, he saw fascism as "agricultural slavery." When Mussolini took over as prime minister, Matteotti quickly challenged the future dictator. In 1922, he interrupted a speech by the new prime minister with the call, "Long Live Parliament."

Mussolini's control over Italian politics remained a shaky one for years after 1922. His most serious weakness was the lack of a Fascist majority in Parliament. To remove this barrier, Mussolini had a new election law passed. The Acerbo Law of 1923 permitted the Fascists to get an overwhelming majority of the seats in Parliament merely by getting the largest number of votes cast for any party. Thus the elections of April 1924 were crucial to the future of fascism.

The Fascists obtained their majority, but Matteotti immediately challenged the election results when Parliament met on May 30, 1924. In a dramatic speech lasting more than an hour, Matteotti accused the government of committing election fraud. The balloting, especially in northern Italy, had been marred by violence and intimidation, he claimed. With Fascist bullies overseeing the voting, the results were predetermined and they were corrupt. Matteotti maintained his long-standing reputation for precision and accuracy by citing numerous instances of wrongdoing. Interrupted by a storm of protest from Fascist deputies, he called for the election to be declared invalid.

The speech cost Matteotti his life. Aware of the danger, he had remarked to a colleague at the conclusion of his speech: "Now you can prepare my funeral oration."

In early June, Matteotti disappeared. Witnesses in Rome reported seeing a group of men drag someone into a car on June 10; the bloodstained car was quickly found and traced to officials of the Fascist Party. Although Matteotti's body was not discovered until weeks later, the shock of his kidnapping and probable murder had an immediate effect.

The killers acted without direct orders from Mussolini, and it is possible they intended only to kidnap Matteotti. In trying to fight off his attackers, Matteotti may have led them to kill him. Nonetheless, Mussolini's movement had made a practice of using violence against political opponents, and Mussolini himself had responded to Matteotti's speech by saying that it deserved more than just words in reply.

Outside Italy, protests developed, notably in Britain and France. Inside Italy, it seemed that Mussolini's Fascist government would fall. When many political leaders called for his resignation as prime minister, Mussolini was forced to give up his cabinet position as minister of the interior (an office charged with maintaining domestic order), and several other Fascist leaders gave up high-ranking positions in the police. Five Fascist thugs with long records for attacks on opposition political figures were arrested for assaulting and kidnapping Matteotti.

Gradually, however, Mussolini regained his footing, and anti-Fascist groups in Italy let the opportunity to remove him slip away. The most vigorous protest against the crime came when more than 100 deputies boycotted all sessions of the Italian Parliament beginning in late June. Opponents of Mussolini hoped that King Victor Emmanuel III would demand the resignation of the Fascist leader, but the king never took this decisive step. Matteotti's killers went unpunished. During 1925, Mussolini moved to consolidate his dictatorship. Socialist leaders were arrested, censorship was tightened, and Mussolini ended parliamentary control over his government.

The significance of Matteotti's life and death continued to reverberate for more than two decades. Matteotti's Socialist colleague Filippo Turati helped to found a coalition of anti-Fascist exile groups. A symbol of Matteotti's memory was a statue of the murdered leader erected in Brussels, Belgium, in 1927. In 1943 in the midst of World War II, Italian Socialist partisan units formed themselves into "Matteotti brigades" to fight the Fascists.

A remarkable sequel to the Matteotti case came in the aftermath of World War II. In 1945, four of the individuals implicated in the murder of the Socialist leader were arrested. Two of them, including Amerigo Dumini, the leader of the group that killed Matteotti, were convicted and sentenced to 30 years in prison.

—. The Italian Left in the Twentieth Century: A History of the Socialist and Communist Parties, Indiana University Press, 1989.

Gaetano Salvemini , Gaetano Salvemini The Italian historian and journalist Gaetano Salvemini (1873-1957) introduced economic and social analysis into Italian historiogra… Achille Lauro , Achille Lauro Achille Lauro (1887-1984), II Comandante (The Commander), had a rich business and political life. His fleet of ocean going vessels was… Carlo Levi , Carlo Levi Carlo Levi The Italian writer and painter Carlo Levi (1902-1975), noted as an anti-Fascist leader during Mussolini's dictatorship, scored… Benito Mussolini , Mussolini, Benito Benito Mussolini ruled as dictator of Italy from 1922 to 1943. His political philosophy, which he called fascism, was based on the… Relations With Italy , Italy, relations with. Medieval English kings were several times involved in fierce disputes with the papacy concerning church–state relations. The p… Giovanni Giolitti , Giolitti, Giovanni GIOLITTI, GIOVANNI the political crisis of the 1890s the giolittian era, 1903–1914 the war and the crisis of the giolittian politi…