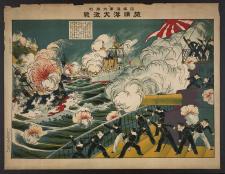 His father, Osip Fyodorovich Makarov, retired from the navy in 1873 with the rank of junior captain. His mother came from a simple family and had no education; she died in 1857, leaving two daughters and three sons, of whom Stepan was the youngest. His officer’s rank enabled Makarov’s father to enroll his son at the age of ten at the naval school at Nikolayevsk-na-Amure, to which his father had been transferred. The five-month voyage from St. Petersburg instilled in him a love for the ocean and for sea voyages: Makarov often said, “At sea means at home.”

Makarov graduated from the naval school in 1865. He served as a cadet and in May 1869 he was commissioned a warrant officer. Assigned to the Black Sea fleet in 1876 as commander of a steamer, he conducted successful military actions during the Russo-Turkish War.

In 1881–1882 as commander of the ambassadorial station ship Taman in Constantinople, Makarov conducted hydrological research in the Bosporus. In 1886–1889 he commanded the corvette Vityaz on its round-the-world voyage, and in 1896 he became vice-admiral. From the beginning of 1897 Makarov was actively involved in research on icebreaker in the North Atlantic. While planning the icebreaker Ermak Makarov studied previous voyages through ice, particularly on the Great Lakes. He supervised the building of the Ermak in England and in 1899–1901 completed the first voyages on it in polar latitudes. In December 1899 Makarov was named commander in chief of the Kronshtadt port and military governor of Kronshtadt. Makarov died during the Russo-Japanese War, when his battleship, the Petropavlovsk, was sunk by a Japanese mine.

Makarov began his oceanographic studies in 1881–1882 on currents in the Bosporus. In his first experiment Makarov proved the existence of a deep current running counter to the surface current. In the middle of the channel, he let down a barrel which was borne by the surface current toward the Sea of Marmara. At a certain depth the line began to pull in the opposite direction. The force of the deep current was so great that the barrel dragged the boat against the surface current. Makarov organized systematic observations of the water density and temperature at various depths, and of the velocity of the current throughout the strait. The velocity of the current was measured by a rotator, which Makarov invented and which he called a fluctometer. The velocity of the surface current varied from 6 to 3.22 feet per second, and of the lower from 3.22 to 1.84 feet per second. The density of the upper water was 1. 015; the lower, 1.028. This difference in density between the less saline Black Sea and the more saline Sea of Marmara appears to be the reason for the existence of contrary currents in the Bosporus. Makarov estimated that the ratio of the volume of inflow to outflow in the Black Sea is 1: 1.85; the difference is accounted for by fresh water flowing into the Black Sea. The results of Makarov’s Bosporus research were published in Ob obmene vod Chernogo i Sredi-zemnogo morey (“On the Exchange of Water of the Black and Mediterranean Seas,” 1885), which was a major contribution to oceanography.

In his main oceanographic work, Vityaz i Tikhy okean (“The Vityaz and the Pacific Ocean,” 1894), he explained the hydrological observations carried out under his direction aboard the corvette Vityaz on its thirty-three-month round-the-world voyage. Although it was undertaken mainly for purposes of military instruction, Makarov began oceanographic observation at the outset. Makarov made more than 250 individual measurements of water density and temperature at depths from twenty-five to 800 meters. After careful analysis of the results of these observations and also descriptions in logs of other voyages, Makarov compiled the first water temperature tables for the North Pacific Ocean. He also considered the origin of the deep waters of the North Pacific, the reason for the homogeneous temperature and density of the water at every depth of the English Channel, the reason for the rising of deep waters near the mouths of large rivers, and the general pattern of ocean currents, with an indication of the primary significance of the action of the Coriolis force on sea currents. This main work of Makarov’s, published simultaneously in Russian and French and awarded prizes by the St. Petersburg Academy of Sciences and the Russian Geographical Society, brought Makarov international recognition as a scientific oceanographer.

Makarov conceived the idea of opening up navigation along the northern borders of Siberia with the aid of icebreakers. “Straight Through to the North Pole!” was the expressive title of his report in 1897 to the Russian Geographical Society. On two voyages on the icebreaker Ermak to Spitsbergen and to Novaya Zemlya (1899–1901), Makarov gathered data on the Arctic ice and on the temperatures and salinity of the Arctic basin.

Although the Ermak, constructed on Makarov’s initiative, did not achieve all the results for which its creator hoped, research in the Arctic Ocean with icebreakers has subsequently been widely realized in the Soviet Union.

Makarov must be credited with a great number of different inventions pertaining to oceanographic research and naval construction. He published several works on naval tactics, the chief of which was Rassuzhdenia po voprosam morskoy taktiki (“Considerations on Questions of Naval Tactics”). Several geographical areas including an island in the Nordenskjöld Archipelago and in the Kara Sea were named for him.

Vice Admiral Stepan Osipovich Makarov, commander of the Pacific Squadron of the Russian navy during the Russo-Japanese War and the author of more than fifty works on naval tactics, technology, and oceanography, was born in Nikolaevsk on the Bug River and graduated from naval school at Nikolaevsk on the Amur in 1865. While still in school he was deployed with the Pacific Squadron in 1863, and after graduation he joined the Baltic Fleet. Serving on the staff of Vice Admiral A.A. Popov from 1871 to 1876, Makarov was involved in naval engineering projects, including studies of problems related to damage control.

During the Russo-Turkish War of 1877–1878, Makarov commanded the Grand Duke Konstantin and successfully conducted mine/torpedo warfare against Turkish units in the Black Sea, using steam launches armed with towed mines and selfpropelled torpedoes. In 1878 he took part in the unsuccessful effort to construct a mine-artillery position to prevent the British Royal Navy from entering the Turkish Straits and began the development of techniques for underway minelaying. He conducted a major study of the currents in the Turkish Straits during the late 1870s, commanded the riverine flotilla that supported General Mikhail Skobelev's Akhal-Tekke Campaign in Central Asia in 1880-1881, commanded the corvette Vityaz on a round-the-world cruise from 1886 to 1889, served with the Baltic Fleet during the early 1890s, and was inspector of naval artillery from 1891 to 1894. During the mid-1890s Makarov completed another round-the-world cruise. In December 1897 he published his essay "Discussions on Questions of Naval Tactics." Makarov wrote extensively on the impact of technology on naval tactics and was one of the foremost authorities on mine warfare at sea. During the late 1890s he directed the construction of the Baltic Fleet's first icebreaker, the Ermak. In 1899 he was appointed commander of the naval base at Kronstadt.

After the Japanese surprise attack in January 1904, Makarov assumed command of the Russian squadron at Port Arthur, immediately instituting measures to raise the morale of its crews. On April 13 Makarov ordered a sortie to support Russian destroyers engaged with Japanese vessels. Shortly after getting under way his flagship, the battleship Petropavlovsk, struck a mine that detonated the forward magazine. Vice Admiral Makarov died along with most of the ship's crew and the painter Vasily Vereshchagin.

Sargasso Sea , Skip to main content Sargasso Sea Sargasso Sea The calm centre of the anticyclonic gyre in the North Atlantic, comprising a large eddy of surface wat… Hydrothermal Vent , A hydrothermal vent is a geyser that is located on the floor of the sea. The first such vent was discovered in 1977 on the floor of the Pacific Ocean… Inland Sea , inland sea Extensive body of water that is largely or wholly surrounded by land. Any connection to the open ocean is restricted to one or a few narro… Hydrothermal Vents , Hydrothermal vents are places where hot fluids (up to 752°F [400°C]) related to volcanic activity are released from the ocean floor. Because of the h… Antarctic Circumpolar Current , Antarctic Circumpolar Current (West Wind Drift) The largest and most important ocean current in the southern hemisphere. It flows in an eastward dire… Globigerina Ooze , Globigerina ooze Deep-sea ooze in which at least 30% of the sediment consists of planktonic foraminifera (Foraminiferida) including chiefly Globigeri…