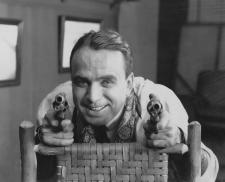 David Wark Griffith (1875-1948), American filmmaker, was a pioneer director-producer who invented much of the basic technical grammar of modern cinema.

On Jan. 22, 1875, D. W. Griffith was born at Crestwood, Oldham County, Ky., the descendant of a distinguished (but impoverished) Southern family. Scantily educated but convinced of his "aristocracy," he became an actor at 18 in Louisville. For 10 years he was a supporting player in provincial companies, using the stage name Lawrence Griffith to protect his family's honor but his real name for the plays and poetry he was trying to publish. In 1906 he secretly married actress Linda Arvidson Johnson, who viewed his literary and directorial aspirations unsympathetically and, after 5 years, left him.

In 1907 Griffith sold a poem to Frank Leslie's Weekly and a play, A Fool and a Girl, to actor James K. Hackett. The play promptly failed, and Griffith was driven to try the then unsavory movie business. E. S. Porter, whose Great Train Robbery was the first "story" film, gave him the lead in a primitive one-reeler called Rescued from an Eagle's Nest and unwittingly started Griffith toward greatness.

In 1908 Griffith sold several stories to the Biograph Company and also acted in them. Within a few months he had a chance to direct. The success of his first effort, The Adventures of Dollie, led to regular employment, a series of rapidly improving contracts, and pride enough in his work to use his real name.

During 5 years with Biograph, Griffith made hundreds of short pictures and gradually won consent to increase their length beyond one reel, thus enabling him to expand narrative content. With the help of his famed cameraman, G. W. "Billy" Bitzer, he made revolutionary technical innovations in film making. He also started the cinema careers of Mary Pickford, Mack Sennett, the Gish sisters, Lionel Barrymore, and many others.

In 1913 Griffith formed an independent company. Within 2 years he completed his epic masterpiece The Birth of a Nation (1915), often considered the most important film ever made. Dealing with the Civil War and its aftermath in the South, it was, for its day, incredibly long (12 reels) and expensive ($100,000). However, it grossed $18 million within a few years of release and established once and for all the astonishing power and potentiality of cinema as a serious art form. The film also aroused storms of controversy because of its treatment of African Americans and Ku Klux Klansmen.

Determined to clear himself of charges of prejudice, Griffith next made one of the most enormous, complex, and ambitious pictures in history. Intolerance (1916) attempted to interweave four parallel stories—modern, biblical, 16th-century French, and Babylonian—into a monumental sermon on the evils of inhumanity. His financial backers were appalled; audiences found it chaotic and exhausting; but for all its faults, Intolerance established techniques and conventions which permanently affected film making. Individual fragments of this huge, disjointed picture became the basis for entire schools of cinematic development. The overpowering Babylonian sequences with immense crowds and sumptuous spectacle provided Cecil B. DeMille and others with the substance of their whole careers.

In 1917 Griffith made a propaganda film for the British government, Hearts of the World, which served mainly to display the director's ultimately fatal tendency toward melodrama and sentimentality.

Returning to the United States, Griffith joined Mary Pickford, Douglas Fairbanks, and Charlie Chaplin in forming United Artists, through which he released such famous pictures as Broken Blossoms (1919), Way Down East (1920), and Orphans of the Storm (1921); their varying success temporarily relieved his steadily mounting financial difficulties.

After his important film Isn't Life Wonderful (1924), Griffith was increasingly out of tune with popular taste and with the growing film industry. He was obliged to work as an employee in the new Hollywood studio system. After 1927 the transition to "talkies" posed further problems, and although he managed one more independent production in 1930 (Abraham Lincoln), his career was finished by 1931. He received one small directing assignment, for which he was not paid, in 1936.

Griffith had led the new medium of film into unexplored areas of spectacle, realism, intimacy, and social content. His contributions to the technique of film art include the invention of the close-up, the long shot, the fadeout, night shots, high and low photographic angles, cross-cutting, backlighting, the moving camera, and many other devices that are now taken for granted. Despite his genius, he was, except for 39 weeks on radio, unemployed and unemployable for the last 17 years of his life. A second marriage ended in divorce in 1947, and a year later, at age 73, he died, alone and almost forgotten, in a shabby side-street Hollywood hotel.