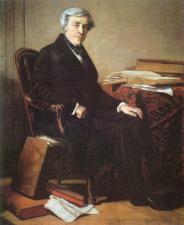 Jules Michelet was born and educated in Paris, the only child in a loving family of poor printers. Largely self-taught in his early years, the apprentice turned student entered the prestigious Charlemagne College in 1813 and had to repeat his first year. Then he sped forward. Baccalaureate in 1817, doctor of letters from the Sorbonne in 1819, and lycée professor in 1821, Michelet launched a brilliant academic career, and he lived up to his promise. Thus Michelet is sometimes presented as a sort of nouveau riche, a man who entered the bourgeoisie by profession, income, and social contacts. Yet Michelet always claimed that he remained true to the common people, and a careful reading of his life and work confirms his self-definition.

The young Michelet was strongly influenced by the still largely ignored Italian philosopher Giovanni Battista Vico (1668–1744), who viewed history as the development of societies and human institutions, as opposed to the biography of great men or the work of divine providence. Translating and commenting on the Italian's work in an 1827 publication and thereby contributing to Vico's discovery in the nineteenth century, Michelet wrote introductions to both modern and universal history and was rewarded with an appointment to the École Normale Supèrieure. Then, after completing a two-volume History of the Roman Republic (1831), Michelet turned his focus from antiquity to medieval France. Motivated by the Gothic revival and Romantic nationalism, Michelet's decision also reflected his appointment as director of the historical section of the National Archives shortly after the Revolution of 1830. This allowed him to combine teaching and writing with intense research in still largely unexplored documentary collections and tell what he believed would be the genuine history of his country and its people. Many historians, though not Michelet himself, believe that his history of France in the Middle Ages, published between 1833 and 1844 and becoming the first six volumes in his multivolume History of France (1833–1867), is his most solid, useful, and lasting accomplishment. They single out his vast knowledge of the sources, his uncanny evocation of times and places, and his empathetic and balanced understanding of different views and individuals. Michelet explained in 1835, "it is an indispensable condition for the historian to enter into all doctrines, to understand all forces, and to be passionately involved in every state of mind" (quoted in Monod, p. 30). His treatment of the national revival under Joan of Arc in the fifteenth century is a famous example of his early work.

As Michelet was finishing his history of the Middle Ages, he experienced personal challenges, and he became increasingly impassioned and partisan. Moving from the École Normale in 1837 to teach at the Collège de France, he left working closely with a small elite to lecturing to a large, excitable crowd that preferred eloquent language and sweeping synthesis to precise analysis. Increasingly France's past seemed important to Michelet as the long, difficult preparation for the French Revolution, when the French people reached maturity and began the liberation of mankind. Committed historian and man of the people, he would now concentrate his feelings on the side of popular forces and guard against his earlier generous, but impartial and therefore superficial, sympathy for all.

This critical turning point in the historian's development is reflected in Michelet's The People (1846), written just before Michelet jumped from the Middle Ages to his white-hot History of the French Revolution (1847–1853). Drawing in The People upon personal experience, history, and contemporary debates, Michelet paints a vivid picture of French society and the social dislocation that afflicts all classes. Then, after rejecting socialism, he offers a solution in the form of republican nationalism and egalitarian secular education that will teach the Revolution of 1789 and heal a fractured France. Sickened by the failure of the Revolution of 1848 and refusing to swear allegiance to Louis-Napoleon Bonaparte (later Napoleon III; r. 1852–1871), Michelet lost his government positions and turned to full-time writing. He completed his seven-volume history of the French Revolution, filled in the early modern period history of France with another eleven volumes, and wrote popular impressions of nature and anticlerical polemics. Michelet's later history is often criticized for being overly emotional and biased against the monarchy, the nobility, and the clergy, while idealizing popular forces and revolutionary upheaval. A great individualist, Michelet had many admirers but few disciples. He survives as a gifted writer with a grand, heartfelt historical narrative of compassionate nationhood for a noble people.

The French historian Jules Michelet (1798-1874) wrote the "Histoire de France" and "Histoire de la Révolution française," which established him as one of France's greatest 19th-century historians.

Jules Michelet was born on Aug. 21, 1798, in Paris. His father was a printer by trade, and his mother's family was from peasant stock. The family was poor, especially after Napoleon ordered the closing of his father's press. This family background prompted Michelet's initial sympathy with the French Revolution.

In 1822 Michelet began his long and devoted career as a teacher, becoming professor of history and philosophy at the École Normale Supérieure in 1827. In one of his earliest works, a translation of Giovanni Battista Vico's Scienza nuova, Michelet introduced such ideas as the importance of myth and language in historical understanding and the ability of man to forge his own history. His first volumes of French history treated the Middle Ages; already he revealed a passionate adherence to the role of the common people in history.

When Michelet joined the faculty at the Collège de France in 1838, his writing became more liberal and more oriented toward contemporary issues. Collaboration with a colleague, Edgar Quinet, on a book against the Jesuits raised the Church's suspicions. In addition, Michelet was waking up to the esclavage (slavery) of classes in an industrial society, a concern he expressed in his moving book Le Peuple (1846). Thus Michelet and other writers of the period, encouraged by the revolutionary spirit growing since 1830, were attracted to the French Revolution. Michelet's seven-volume Histoire de la Révolution française illustrates his famous concept of history as a resurrection of the past in its spontaneous entirety. Although in this immense achievement the portraits of certain revolutionaries are masterfully drawn, Michelet is more sympathetic when narrating crowd scenes, for example, the fall of the Bastille.

The failure of the 1848 revolutions, Louis Napoleon's coup d'etat of 1851, and the proclamation of the Second Empire in 1852 profoundly disturbed Michelet. Although he was not exiled, he spent the following year in Italy.

Worn by arduous work and depressing historical events, Michelet discovered new life in his second marriage with 20-year-old Atanaïs Mialaret. Inspired by her love of nature, he wrote four poetical studies: The Bird (1856), The Insect (1857), The Sea (1861), and The Mountain (1867). These fecund later years saw two other outstanding books: one on the medieval witch (La Sorcière, 1862) and the other on world religions, including an attack on Christianity (La Bible de l'humanité, 1864). Michelet finally completed his history of France in 1867. Working continuously, he had written three volumes on 19th-century France up to the time of his death on Feb. 9, 1874, when he suffered a heart attack at Hyères.

A study of Michelet's thought is Ann Reese Pugh, Michelet and His Ideas on Social Reform (1923). An excellent profile and analysis appears in Pieter Geyl, Debates with Historians (1955; rev. ed. 1958). Michelet is also considered at length in George Peabody Gooch, History and Historians in the Nineteenth Century (1913; 2d ed. 1952; with new preface, 1959). See also Fritz Stern, ed., The Varieties of History (1956).