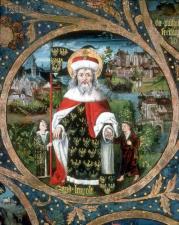 oxford
views updated
Anhalt-Dessau, Leopold III Friedrich Franz, Fürst (Prince) von (1740–1817). German hereditary Prince (he reigned over his Principality from 1758, and from 1807 as Herzog (Duke) von Anhalt-Dessau), he was a patron of architecture and, more importantly, of landscape-architecture. The Anglophile Prince, in 1763–4, 1768–9, 1775, and 1785, spent about two and a half years altogether in England, and in 1764 began work to transform a total area of 300 square kilometres of meadow-land along the banks of the River Elbe into a Gartenreich (Garden Kingdom) to evoke the England he so admired by means of landscapes, gardens, and fabriques. Essentially, these gardens of allusions were not only mnemonic, but were intended as exemplary and educational: different styles in the buildings were to improve taste, and over thirty solutions to the technical problems of bridge-building were demonstrated in the structures over the waters. As a centrepiece to the gardens at Wörlitz, an Anglo-Palladian house was erected to designs by Erdmannsdorff (a friend of the Prince, who advised on the design of the landscape and prepared drawings of the various fabriques). There are allusions to the Île des Peupliers at Ermenonville in France (the tomb of Rousseau); to the English diplomat and archaeologist Sir William Hamilton (1730–1803), and his collection of Greek vases in Naples in the ‘Villa Hamilton’ and rockwork ‘Vesuvius’; to modernity in the form of the Iron Bridge (a quarter-scale version of Pritchard's original of 1775–9 at Coalbrookdale, Salop.); to Walpole's Strawberry Hill at Twickenham, Mddx., of 1750–76, in the Gothic House; to Chambers's Casino at Wilton, Wilts. (c.1759) in the Temple of Flora; and much else influenced by people such as Clérisseau, Chambers, and Winckelmann. The various allusions in the Gartenreich (or ‘England-by-the-Elbe’) suggested an approach to life that was open-minded and free from all bigotry: the presence of the Synagogue said as much. Apart from Erdmannsdorff, the gardeners involved in the creation of the Gartenreich were J. L. L. Schoch, J. G. Schoch, and J. F. Eyserbeck. They succeeded in creating one of the most enchanting places on earth.