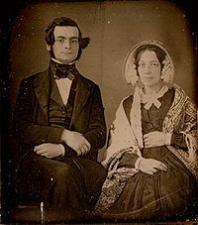 Samuel Leonard Tilley was born on May 8, 1818, at Gagetown, New Brunswick, into a family which had once farmed part of what is now Brooklyn, New York City, and as loyalists had migrated northward after the American Revolution. He was educated at local schools in Gagetown and moved at the age of 13 to Saint John, where he became an apothecary's clerk in a doctor's dispensary. In 1838 he became a partner in a mercantile firm, disposing of his share in 1855, by which time he had earned a modest fortune.

Tilley's public career began in 1837, when he undertook what was to be a lifelong espousal of temperance; thereafter he could rely on prohibitionist support on almost any issue. He was first elected to the Legislative Assembly of New Brunswick in 1850 but resigned in 1851 on a matter of principle. He was reelected in 1854 and became provincial secretary in the Cabinet of Charles Fisher. That government fell in 1856, when a prohibition act sponsored by Tilley led to such widespread evasion of the law that the lieutenant governor summarily dissolved the Assembly. In the ensuing election the Fisher government, including Tilley personally, was defeated. Tilley was reelected in 1857, becoming premier in 1861 and remaining in office until defeated as a champion of confederation in 1865. The anticonfederate forces fell apart, however, and in 1866 Tilley was back in a proconfederation Cabinet which won a healthy victory at the polls in the same year.

Before 1867 Tilley's chief public interest was confederation, and he had long been an advocate of one of its chief requisites, a railway uniting British North America. He was a delegate representing New Brunswick at the conferences in Charlottetown and Quebec in 1864 and in London in 1867. It was a natural step for him to become a member of the first Canadian House of Commons, and he was elected for Saint John City in 1867 and reelected in 1872. The first prime minister of Canada, the Conservative Sir John Alexander Macdonald, carefully constructed his first Cabinet to give the fullest possible representation both to the new provinces and to existing political interests; and Tilley, although a Liberal, was taken into Macdonald's government as the first minister of customs.

This portfolio, involving as it did the reorganization of the former provincial services into a unified federal administration, was a major, though not a spectacular, assignment in which Tilley acquitted himself well. Shortly before the parliamentary session of 1873 Tilley was appointed minister of finance, a distinct promotion but a short-lived one, as the Macdonald ministry went out of office in the same year, and Tilley had been appointed lieutenant governor of New Brunswick even before that event.

Tilley served in the province until 1878, when he was again persuaded to run for Saint John. Upon his own reelection and the formation of a second ministry by Macdonald, Tilley again became minister of finance. He was reelected to the Commons in 1882 and served in Finance until 1885, in a portfolio made particularly sensitive by Macdonald's adoption in 1878 of a general policy of tariff protection for Canadian industry, the National Policy. Tilley, long a protectionist where New Brunswick was concerned, had no trouble adapting his views to the national scene. In 1885, his health failing, he returned again to his native province as lieutenant governor. He retired in 1893 and died on June 25, 1896.

Tilley was created a commander of the Bath in 1867 and knight commander of St. Michael and St. George in 1879, both honors earned through an industrious and impressively puritanical career. In a period of rather flamboyant politics, Tilley, an Anglican, was not only a prohibitionist but a devoted attender of churches and supporter of Bible societies. He was one of the pioneers in New Brunswick in favor of vote by secret ballot and decimal currency. He was married twice and was the father of four sons and five daughters.

No modern critical biography of Tilley has been written, but a contemporary, James Hannay, wrote voluminously about him and his period: The Life and Times of Sir Leonard Tilley (1896) and Wilmot and Tilley (1909). Material on Tilley's career is also in Donald Creighton, John A. Macdonald (2 vols., 1952-1956). For general background see William George Hardy, From Sea unto Sea: Canada, 1850 to 1910—The Road to Nationhood (1960), and William L. Morton, The Critical Years: The Union of British North America, 1857-1873 (1964). □