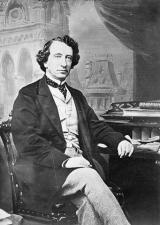 Sir John Alexander Macdonald (1815-1891) was a leading Canadian politician and Cabinet minister, serving as premier in the Province of Canada and twice as prime minister of the Dominion.

John Alexander Macdonald, although his name was to become the core of a Canadian legend, was born in Glasgow, the son of a merchant who migrated to British North America in 1820. The family settled in the Kingston area of what is now Ontario, and Macdonald was educated in Kingston and Adolphustown. In 1830 he was articled to a prospering lawyer with connections that were to prove helpful to Macdonald, who rose rapidly in his profession.

Macdonald began his own practice in 1835 in Kingston, actually before he had been called to the bar, and for several years lived the usual active life of a young professional man, active in local political and social affairs. Since Kingston was a border town, it was inevitably involved in the border incidents of the late 1830s, and Macdonald's first celebrated case found him in 1838 defending a captured invader from the United States on a charge of murder. Kingston's location kept it immediately free of the abortive Upper Canada Rebellion of 1837, but Macdonald's sympathies were from the first on the side of constituted authority, and the rebellions and the coincidental border incidents gave him a lasting concern for the military vulnerability of the colonies.

Start of a Political Career

Macdonald was elected to the Assembly of the Province of Canada (created in 1840) in 1844 as the member for Kingston, beginning a public career that spanned half a century. At a time when party lines were loose, Macdonald regarded himself as a moderate conservative and always remained one, serving for the rest of his life in the Liberal Conservative party. His abilities brought him rapid promotion, and he became receiver general in W. H. Draper's Cabinet in 1847; thereafter he was without public office only when his party was in opposition. He worked indefatigably to conciliate the dissident elements in his party and by 1851 was the recognized leader of its Canada West (now Ontario) wing.

By 1856, when Macdonald was, as attorney general for Canada West, the recognized leader in the Assembly of a Cabinet whose titular head was in the upper house, his position had been confirmed, and his leadership was never seriously challenged in his lifetime. He was premier of the Province of Canada in all but name while his party was in power (and actually so for the first time in 1857), simultaneously holding major portfolios, which included Militia Affairs.

The politics of the Province of Canada, in which Canada East and West had equal legislative representation, was extremely unstable, and successive administrations in the colony, in the absence of reliable party lines, broke down; an impasse was reached in 1864, when Macdonald was one of the leading protagonists in arranging what became the Great Coalition, which led to confederation in 1867. In 1858, although federation was an older idea than that date, he had been a member of the first Canadian Cabinet to announce officially its interest in a federal union for the British North American colonies.

Once he had taken up confederation, Macdonald threw all his energies into the task of persuading the colonists of its soundness as a solution to their economic and military weaknesses. In 1864, he led the delegation from Canada to the conference at Charlottetown, Prince Edward Island and continued to lead when the conference adjourned to Quebec in the same year. In 1865, he went to London to discuss military arrangements for Canada in the light of the outcome of the American Civil War and resulting British-American relations. Macdonald was back in London in 1866, though disturbed by Fenian raids on Canada from American soil. He presided over the conference which worked its way through several drafts of the British North America bill before its final enactment by the United Kingdom Parliament as the written basis of the Canadian constitution.

The final act bore all the marks of Macdonald's influence. Canada was to be a monarchy in North America, with a quasi-federal system in which a strong central government would have several instruments of control over the provinces, and with a parliamentary government modeled clearly on the British, not any American, model. He never wavered in his belief that this was the proper sort of government if Canada were to survive as an independent entity. He never wavered either in his conviction that the United States, whose government he never trusted, posed the real long-run threat to Canada's survival.

In 1867 Macdonald became the first prime minister of the Dominion of Canada. He set about consolidating into reality his vision of Canada as a northern transcontinental nation whose nerve center was always to be the national government. He immediately pacified Nova Scotia, the least satisfied member of the new federation. He gradually gathered into federal hands control of the election machinery, giving the country a unified national electoral system which still exists. He used freely the federal power of disallowing provincial statutes which he considered to be against the national interest. He worked hard to enlarge Canada's boundaries, first helping to acquire the Northwestern Territory and then obtaining the admission of Manitoba, British Columbia, and Prince Edward Island.

Macdonald never relinquished his interest in the defense of British North America and was indeed frequently exasperated by what seemed to him British indifference not only to Canada's military needs but to its economic relations with the United States; he often saw that British and American authorities were, in their own interests, only too ready to make concessions to each other at Canada's expense.

Macdonald consolidated Canada's continental position in more than territorial ways. Through two great policies—the building, under incredible financial and technical difficulties, of a transcontinental railway; and the establishment of a national policy of protective tariffs for the stimulation of industry—he sought to build the national economy clearly envisaged in the British North America Act. The railway cost him his only major electoral defeat, for in 1873, in a well-meant and undoubtedly customary move, he turned to potential backers of the Canadian Pacific Railway for election funds; and the opposition caught him out. Facing certain parliamentary defeat, he then resigned and lost the general election of 1874.

But in opposition, Macdonald was as wily as in office: he gave his Liberal opponents a couple of years in which to fall out among themselves and then produced his national policy, which he discussed widely at great public picnics, beginning in 1876. In 1878 he returned triumphantly to the prime ministership and held it until his death.

Macdonald was fortunate in his political career, as his opponents never really produced a fighter who could challenge him. Even in his most trying problems, as in the Riel Rebellions of 1870 and 1885, his opposition seemed unable to exploit his undoubted difficulties; and even after the execution of Louis Riel in 1885—an act which, despite careful judicial decisions, outraged some Roman Catholic and considerable French-Canadian opinion—he won his last two general elections. He was defeated as the candidate for Kingston only once, in 1878, but in the same election he won two other seats and sat for one of them.

Macdonald's brilliant public career was not matched by an equally felicitous private life. He enjoyed many honors, including degrees, and a knighthood conferred in 1867. But his first wife, his cousin Isabella Clark, whom he married in 1843, was an invalid almost all their life together and died in 1857; their first son died in his second year, but their second son, Hugh John, lived to become a lawyer-politician with modest success.

In 1867 Macdonald married Susan Agnes Bernard, and they were very happy; but their only child, Mary, was a hydrocephalic who never approached normalcy. Macdonald was also plagued until his later years by what would now be recognized as alcoholism: he was a sporadic heavy drinker, often at inconvenient times for his public duties. Yet his colleagues never lost faith in him, and successive able governors general, who had to report on his activities to their home government, treated his intemperance as merely an unfortunate weakness in an otherwise remarkable man.

That he was. A cheerful, convivial person who loved stories, a crafty partisan who enjoyed discomfiting his opponents by any means, and a voracious and perceptive reader of a wide range of literature, Macdonald had a vast capacity for arousing the affection of his colleagues. When he died in 1891, after a last exhausting campaign which appeared to have induced a series of paralyzing strokes, his chief opponent said of him that "for the supreme art of governing men, Sir John Macdonald was gifted as few men in any land or in any age were gifted."

oxford
views updated
Macdonald, Sir John Alexander (1815–91) Canadian statesman, first prime minister of the Dominion of Canada (1867–73, 1878–91). He strengthened the Dominion by introducing protective tariffs, encouragement of western settlement and the acquisition of Hudson's Bay Company lands (1869). His efforts to organize a transcontinental railway led to the Pacific Scandal and electoral defeat (1873).