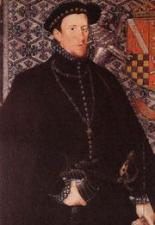 oxford
views updated
Norfolk, Thomas Howard, 4th duke of (1538–72). Norfolk was grandson of the 3rd duke. His father Lord Surrey was executed when he was 8. He and his grandfather were restored to their honours at the accession of Mary in 1553 and he succeeded as duke the following year. Elizabeth gave him the Garter in 1559 and employed him in Scotland to oust the French party. This proved his undoing. After the death of his third wife in 1567, he conceived a plan to marry Mary, queen of Scots, still a possible successor to Elizabeth. They had not actually met but went in for a good deal of literary swooning. In October 1569 he was committed to the Tower and in November his brother-in-law the earl of Westmorland led the rising of the northern earls, on behalf of Mary and the old religion. Norfolk was released in 1570 and assured Elizabeth that the marriage had been abandoned, but allowed himself to be drawn into the Ridolfi plot to replace Elizabeth by Mary. Norfolk's role was to liaise with a Spanish expedition which was to land at Harwich. He was again put in the Tower and executed in June 1572. His personal popularity was considerable but he was vain, vacillating, and timorous. The dukedom was restored to his great-great-grandson in 1660.