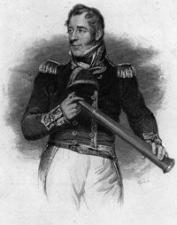 oxford
views updated
Cochrane, Thomas, 10th earl of Dundonald [S] (1775–1860). Cochrane had a long and colourful life. The family was impoverished and he had to make his own way in the world. In 1793 he joined the navy, in which his uncle was serving. During 1800–1 he commanded the Speedy, preying upon Spanish shipping, and captured a frigate three times the size of his own ship. Next he took up politics, was returned to Parliament in 1806 for Honiton, and then Westminster as partner to Sir Francis Burdett. They formed a radical pair, urging parliamentary reform. In 1809 he was given charge of a fireship attack on a French squadron in Aix roads, quarrelled with Gambier, his superior officer, had him court-martialled, and lost. In 1814 Cochrane was involved in a Stock Exchange fraud, sentenced to a year in prison, stripped of his honours, and expelled from Parliament. His radical Westminster constituents returned him again, but he failed to become a second Wilkes. In 1818, abandoning Parliament, he left for South America, where Spain's colonies were in rebellion, and performed deeds of heroism on behalf of Chile, Peru, and Brazil. After that he commanded for the Greeks against the Turks without notable success. Returning to England, he succeeded as earl in 1831 and was given a free pardon in 1832. He was employed once more 1848–51 as commander-in-chief West Indies and promoted admiral. Cochrane was a vigorous and brave leader of men, but a bad subordinate and was never entrusted with supreme command. An uncomfortable national hero, he was buried in Westminster abbey.

Sir Francis Drake , Sir Francis Drake The English navigator Sir Francis Drake (ca. 1541-1596) was the first of his countrymen to circumnavigate the globe. His daring exp… Sir George Rooke , Rooke, George (1650–1709). Admiral. One of the most successful naval commanders of his day, promoted admiral in 1690, Rooke was unusual among his nav… Matthew Bunker Ridgway , Ridgway, Matthew Bunker (b. 3 March 1895 in Fort Monroe, Virginia; d. 26 July 1993 in Pittsburgh, Pennsylvania), U.S. Army officer who served as comm… Sir John Hawkins , The career of the English naval commander Sir John Hawkins (1532-1595) touched all aspects of the Elizabethan maritime world from the illegal and ing… David Glasgow Farragut , The American naval officer David Glasgow Farragut (1801-1870) was the hero of two of the most important Union naval victories in the Civil War. He be… Mitzvah , MITZVAH MITZVAH (Heb. מִצְוָה), a commandment, precept, or religious duty. The term is derived from the Hebrew root צוה which means "to command" or "…