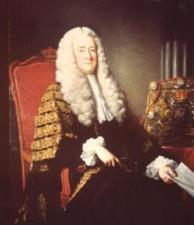 oxford
views updated
Hardwicke, Philip Yorke, 1st earl of (1690–1764). As the longest-serving lord chancellor of the 18th cent., Hardwicke had significant legal achievements to his credit, particularly in clarifying the laws of equity, and great political importance too. He was solicitor-general at the age of 29, chief justice and a peer at 42 and lord chancellor at 46 (1737); this rise being more extraordinary given (for a court Whig) his humble background. He was committed to maintaining order in society with stern sanctions for those who broke it. He presided at the trials of the Jacobite peers and designed the proscriptive measures against the Scottish Highlanders following the 1745 rebellion. An austere man, he had the lifelong friendship of the duke of Newcastle and was a steadying hand on the governments of the 1740s and 1750s. Although resigning as lord chancellor in 1756, he remained a member of the ‘effective cabinet’ until 1762.