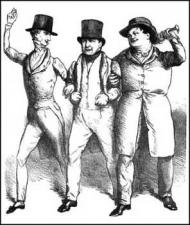 oxford
views updated
Hume, Joseph (1777–1855). The archetypal middle-class parliamentary radical. A confirmed Benthamite, Hume was an indefatigable speaker in Parliament and organizer of committees, pressure groups, and alliances designed to promote advanced liberal causes. Among these were repeal of the Combination Acts, catholic emancipation, Poor Law reform, disestablishment of the Church of England, repeal of the Corn Laws, free trade, extension of the suffrage, retrenchment in government spending, reform of municipal corporations, and the establishment of London University. He entered Parliament in 1812 as Tory MP for Weymouth after making a fortune as a surgeon in India. By 1818 he was a radical and represented a succession of Scottish boroughs. Hume was a friend and ally of Daniel O'Connell and such philosophic radicals as John Arthur Roebuck, George Grote, and Sir William Molesworth.