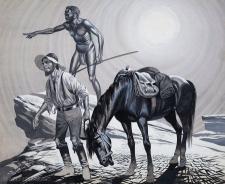 Edward John Eyre (1815-1901) was an English explorer of Australia and an administrator in New Zealand and the West Indies. He was tried for murder in the ruthless suppression of a Jamaican uprising and was acquitted.

Contrary to general belief, Edward John Eyre was born not at Hornsea, Yorkshire, but at Whipsnade in Bedfordshire on Aug. 5, 1815. His father was the Reverend Anthony Eyre, Vicar of Hornsea and Long Riston. Edward lived and was educated in Yorkshire. He completed his schooling at Sedbergh Grammar School and soon after decided to seek his fortune in the colony of New South Wales, where considerable opportunities were opened up by the expansion of the pastoral industry. Arriving at Sydney on March 20, 1833, he moved to the rich Hunter River district. In 1834 he acquired a property near Queanbeyan in New South Wales, but his stock were struck by disease. In January 1837 he returned to Sydney to start a fresh life driving sheep overland, first to Port Phillip and then even farther afield to Adelaide. There he established a home in 1838.

A young man of adventurous disposition who had become accustomed to the hardships of the bush, Eyre turned his attention to exploring. He undertook two expeditions to the north of Adelaide in 1839, and in 1840, at the invitation of a committee of Adelaide interests, prepared for an exploration of the Australian interior. Nothing was known of the central part of Australia, but there were rumors of an inland sea and of the existence of rich pastoral land, for which there was a strong demand. On June 18, 1840, Eyre set out with a small party of two aborigines and three white men, including his foreman and companion on previous trips, John Baxter, to clear up some of these mysteries. For over a month they journeyed in a northerly direction through hot, dry land, eventually turning back in despair at a point which Eyre sadly named Mount Hopeless.

To amend his failure, which weighed heavily on his mind, Eyre resolved to do what no one had previously accomplished, namely, to follow the coast westward around the Great Australian Bight and examine its practicability as a stock route. Despite initial setbacks and the attempts of friends and the governor of South Australia to dissuade him from this hazardous undertaking, he set out from Fowler's Bay on Feb. 25, 1841. Water was short, the terrain difficult, and the temperature extreme. Baxter was murdered by the natives, and only Eyre and a boy named Wylie completed the trip to Albany, a chance meeting with a French whaling ship at Rossiter Bay having provided much-needed assistance.

As an explorer, Eyre was noted more for his courage and perseverance than for finding anything of great value. He had failed to penetrate into the interior, and he discovered little that was not already suspected about the coastal country.

After returning to Adelaide, Eyre was made a magistrate and protector of the aborigines at Moorundie. In December 1844 he sailed for England and in 1846 was appointed lieutenant governor of New Zealand, where he served under and clashed with the governor, Sir George Grey. In 1853 Eyre returned to England and a year later sailed for the West Indies, where he served as lieutenant governor of St. Vincent, acting governor of the Leeward Islands, and governor of Jamaica. He suppressed a serious mutiny in October 1865 but he was recalled following the court-martial and hanging of a member of the local legislature who had been implicated in the uprising.

In England there was a public outcry in which leading figures like John Stuart Mill, Julian Huxley, and Herbert Spencer attacked Eyre, while others such as Thomas Carlyle, Alfred Lord Tennyson, and John Ruskin sprang to his support. Eyre was twice tried and acquitted, but it was not until 1874 that he was allowed to retire on a governor's pension. He died on Nov. 30, 1901, in Devonshire.

For Eyre's own account of his work in Australia see his Journals of Expeditions of Discovery into Central Australia, and Overland from Adelaide to King George's Sound, in the Years 1840-1841 (1845). Recent biographies are M. J. L. Uren, Edward John Eyre (1964), and Geoffrey Dutton, The Hero as Murderer (1967). Eyre's conduct as governor of Jamaica is treated in William Law Mathieson, The Sugar Colonies and Governor Eyre, 1849-1866 (1936), while the resultant controversy in England is discussed in Bernard Semmel, The Governor Eyre Controversy (1962).

Usually, explorers are known for their relatively short life spans. Not so with Edward Eyre. He enjoyed an adventurous, somewhat illustrious career that lasted until he was 86 years of age.

Born in England as the son of a clergyman, Eyre and his family migrated to Australia when he was just 17. Young but ambitious, he showed strong interests in both governmental affairs and the budding world of commercial enterprise. As a result, he was appointed lieutenant governor of New Zealand at age 31 and remained in this post for seven years. (Later in life, he served as governor of Jamaica for one year in 1864-65.)

It was apparent to the young Eyre that the lush farm crops of his native Britain were never going to be possible in the deserts of Australia. Instead, he turned his efforts toward sheep and cattle, which were the principal commercial activities of the time. Although cattle were somewhat profitable as food sources, he looked more favorably on sheep since they yielded good wool, which sold well in European markets.

Initially, Eyre's properties were limited to South Australia, where there was sufficient water for his flocks and for the vegetation they needed to survive. It was soon obvious, however, that new ranges had to be found both for animal forage and for transporting them to wider markets, and thus Eyre set out on expeditions to discover the new ranges. His first effort was directed toward the central part of the continent and the Lake Torrens area in the Flinders Ranges. This expedition was a fiasco in that the so-called "lake" proved to be an impassable, salty marsh, and the sandhills around it were equally impossible to cross. After reaching the aptly named "Mount Hopeless," Eyre returned to Adelaide, where he discovered that the government was planning an entirely different approach to transporting livestock and goods: a route along the coast of Fowler's Bay all the way to Albany at the southwestern portion of the continent.

This seemed like a good plan and—because of his experience and leadership abilities—Eyre was selected to guide the party on the proposed expedition. He was so optimistic about the venture that he volunteered to pay half the costs involved.

The party included six men, including his sheep station manager, Baxter, an aboriginal friend named Wylie, and two other aborigines selected by Wylie because of their experience traveling in the Australian bush.

When they started out in June 1840, they anticipated a three-month leg that would take them to Spencer Gulf, where a government ship would await them with additional supplies for the remainder of the trek. Their initial outlay included 12 horses and 40 sheep as well as food, firearms, and clothing for the hot and cold seasons they would be on the trail. In a very short time, however, Eyre realized that they were in serious trouble. The horrendous conditions they encountered were compounded by a total lack of drinkable water in any direction. Always practical, Eyre sent most of the party back to Adelaide and pushed on with fewer supplies and livestock. During the next few months, the group suffered hardships that brought them close to death on several occasions. When two of the aborigines murdered Baxter and fled with over half of the pitifully small supplies and firearms, Eyre and Wylie escaped certain death when they finally sighted a ship in the bay with a kindly English captain who restored their health and fitness and gave them supplies to continue. Eyre and Wylie eventually reached their destination in July 1841.

Eyre received many honors in his adventurous life, including a gold medal from the Royal Geographic Society for his incredible journey. The Australian government also named a large lake after him as well as a large peninsula at the eastern end of Fowler's Bay in South Australia. He returned to England where he lived until his death in 1901.

Science and Its Times: Understanding the Social Significance of Scientific Discovery