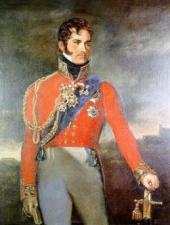 Leopold I (1790-1865), the first king of independent Belgium, reigned from 1831 to 1865. He founded the Saxe-Coburg dynasty, which remains the ruling house of Belgium.

The youngest son of Francis Frederick, Duke of Saxe-Coburg-Saalfeld, Leopold was born in Coburg, Germany, on Dec. 16, 1790. After receiving a military education and serving as a page at the court of Napoleon I, Leopold became an officer in the armies of Czar Alexander I. After the defeat of Napoleon, he settled in Great Britain, where he married Princess Charlotte, the only child of King George IV and Caroline of Brunswick and heiress presumptive to the English throne. Charlotte died in 1817, and Leopold remained in Great Britain until he was elected king of the Belgians on June 4, 1831. He accepted the crown, although he had rejected the throne of Greece in 1830, and took the oath of loyalty to the recently formed Belgian nation in Brussels on July 21, 1831.

The first decade of Leopold's reign was devoted to the establishment of diplomatic and military security for the emerging Belgian nation. The major European powers recognized Belgium, and finally, in 1839, the last issues with the Netherlands resulting from the revolt of 1830 in which Belgium had gained its independence were settled. That same year Leopold also procured a major-powers treaty recognizing Belgian neutrality in the event of European conflict.

Leopold was less successful in internal politics than in international relations. The monarch attempted to form a conservative front, grouping clericals and Liberals into a controlling parliamentary bloc. Between 1830 and 1847 this concentration disintegrated, and the Crown was forced to recognize the principle of government by parties and ministerial responsibility. In 1847 this process of transition was completed by Leopold's recognition of an all-Liberal Cabinet. Leopold remained an authoritarian of Old Regime values, although circumstances had forced him to move Belgium along parliamentary lines.

Leopold's wide family connections earned him the nickname "Uncle of Europe." He was instrumental in bringing about the marriage of his niece Queen Victoria of England to his nephew Prince Albert of Saxe-Coburg-Gotha. Leopold I died at Laeken on Dec. 10, 1865.

There is no standard biography of Leopold. A work favorable to him is Joanna Richardson, My Dearest Uncle: A Life of Leopold, First King of the Belgians (1961). For a brief, sound discussion of the international position of Belgium during the early years of Leopold's reign see Brison D. Gooch, Belgium and the February Revolution (1963). □