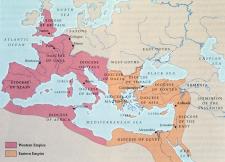 Gaiseric (died 477) was the ruler of the Germanic tribe of the Vandals who established a kingdom in North Africa and in 455 sacked Rome.

The Vandals were one of several tribes pushed into the Roman Empire by the attacks of the Huns. When Gaiseric, the son of King Godegiselus and a slave, succeeded his half brother Gunderic in 428, the Vandals were settled in southern Spain. However, the struggle for power among rivals in the Roman government, as in many other cases, provided new opportunities for the barbarians. The Roman governor of North Africa, Boniface, was under attack by forces of Emperor Valentinian III, and as Boniface's defeat seemed imminent, he was accused, perhaps unjustly, of calling in the Vandals in 429 to counter the Romans.

Gaiseric proved to be one of the most formidable of the barbarian leaders, skillful in both war and diplomacy. A contemporary account describes him of medium height, slightly lame, sparing of speech, but with a deep mind. As soon as he entered Africa, he turned his forces against the Romans, sacking and burning large sections of their territory. His hostility toward the Roman state was heightened by his adherence to the condemned heresy of the Arians. He tried to eradicate much of the orthodox Catholic influence from North Africa.

The conquest of Africa proceeded rapidly. In 430 Boniface was defeated, and in 431 Gaiseric took the city of St. Augustine, Hippo. In 435 the Romans were forced to make a treaty with Gaiseric which granted him much of eastern North Africa. This peace did not last, and in 439 he seized Carthage, the principal city of Roman Africa. In 442, he was recognized as king by the Roman emperor, Valentinian III.

By gaining control of North Africa, Gaiseric had gained control of the major granary of Rome. Furthermore, the Vandals now took to the sea and disrupted the commerce of the Mediterranean as far east as Greece. This type of activity culminated in the capture and sack of Rome in June 455.

Gaiseric was by now firmly established in North Africa, and a new treaty in 442 extended his area of control. He used his diplomatic skills to keep his enemies off guard. When enmity between the Goths and Vandals increased, he urged Attila to attack the Goths. Gaiseric's son married Eudocia, daughter of Valentinian III, who had been captured in Rome.

Meanwhile the rulers of the Eastern Empire were determined to recover North Africa. In 460 Emperor Majorian failed to conquer Gaiseric and was forced into a new treaty in 462. In 468 a massive new expedition was launched. Poorly led and outmaneuvered militarily and diplomatically, it was disastrously defeated. Gaiseric concluded peace with the East Romans in 468 and with the West Romans in 471. With these treaties he secured the Vandalic kingdom. After his death in 477 the kingdom was continued under his descendants until it was conquered by Belisarius in 533-534.

Some of the ancient sources on Gaiseric are translated in C. D. Gordon, The Age of Attila: Fifth-Century Byzantium and the Barbarians (1960). A good English account is J. B. Bury, History of the Later Roman Empire from the Death of Theodosius I to the Death of Justinian, A.D. 395 to A.D. 565 (2 vols., 1923). □

Leptis , Leptis (lĕp´tĬs), ancient city of Libya, E of Tripoli. It was founded (c.600 BC) by Phoenicians from Sidon. Annexed (46 BC) to the Roman province of… Vercingetorix , Vercingetorix Celtic chieftain Vercingetorix (c. 75 BC-c. 46 BC) battled valiantly to keep the Roman army from overrunning the territory of Gaul, as… Attila , Attila Attila (died 453) was a chieftain who brought the Huns to their greatest strength and who posed a grave threat to the Roman Empire. The Huns f… Romanist , Ro·man·ist / ˈrōmənist/ • n. 1. an expert in or student of Roman antiquities or law, or of the Romance languages. 2. chiefly derog. a member or suppo… Alaric , Alaric Alaric (ca. 370-410) was a leader of the Visigoths who clashed repeatedly with the Roman Empire and led his troops in the sack of Rome in 410.… Romans , Romans In the New Testament, a letter by Saint Paul to the Christians of Rome. It was written in c.ad 57, probably while Paul was in Corinth. He decl…