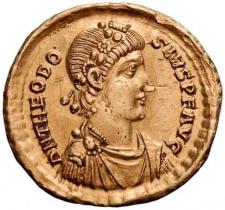 oxford
views updated
Theodosius I (c.346–95), Roman emperor 379–95, known as Theodosius the Great. Proclaimed co-emperor by the Emperor Gratian in 379, he took control of the Eastern Empire and ended the war with the Visigoths. A pious Christian, in 391 he banned all forms of pagan worship.

ELIZABETH KNOWLES "Theodosius I ." The Oxford Dictionary of Phrase and Fable . . Retrieved February 16, 2020 from Encyclopedia.com: https://www.encyclopedia.com/humanities/dictionaries-thesauruses-pictures-and-press-releases/theodosius-i

Alaric , Alaric Alaric (ca. 370-410) was a leader of the Visigoths who clashed repeatedly with the Roman Empire and led his troops in the sack of Rome in 410.… Diocletian , Diocletian (245-ca. 313), in full Gaius Aurelius Va lerius Diocletianus, was a Roman emperor. He established the characteristic form of government fo… Haile Selassie , Haile Selassie 1892–1975 Former Ethiopian emperor On June 30, 1936, a short, seemingly frail man wrapped in a long, black coat addressed the League o… Gallus , Gallus Gallus (Caius Vibius Trebonianus Gallus) (găl´əs), d. 253 or 254, Roman emperor after 251. He fought in the eastern campaign that proved fatal… Lucius Septimius Severus , Lucius Septimius Severus (146-211) was a Roman emperor. His reign is notable for the militarization of the government, growing Oriental influences in… Odoacer , Odoacer The Germanic chieftain Odoacer (433-493), by deposing the Roman emperor Romulus Augustulus, is traditionally credited with ending the Western…