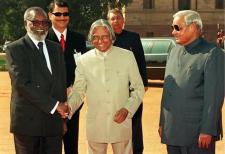 oxford
views updated
Nujoma, Sam (1929– ) Namibian statesman, president (1990– ). A founder and leader of the South West Africa People's Organization (SWAPO) from 1959, Nujoma was exiled by the South African government to Tanzania in 1960. Forced to resort to armed conflict from 1966, Nujoma controlled an army of highly effective SWAPO guerrillas. After negotiating Namibian independence through the auspices of the United Nations, he returned in 1989 to contest successfully its first free elections. He was re-elected in 1994 and 1999.