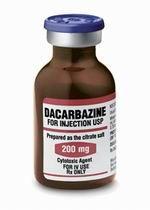 Dacarbazine, also known as DTIC-Dome or DTIC, is an anticancer agent best known for its long-time use in treating metastatic malignant melanoma .

Dacarbazine has been approved by the Federal Drug Administration (FDA) for use in the treatment of metastatic malignant melanoma and Hodgkin's lymphoma, as well as other neoplasms.

Dacarbazine used alone produces a response in up to 25% of patients with metastasis to the surrounding skin and lymph nodes. Though it has been studied in combination with other drugs, and some three-drug combinations have shown promise, evidence thus far does not indicate a clear advantage over traditional single-agent treatment with dacarbazine.

In Hodgkin's disease , dacarbazine is indicated as a second-line therapy, meaning it is used after initial therapies have failed or if the patient's disease recurs. It is usually used in conjunction with other drugs, most commonly in a regimen called "ABVD, " which is comprised of the drugs doxorubicin (Adriamycin), bleomycin , vinblastine and dacarbazine. ABVD has produced complete remission in up to 70% of cases.

Dacarbazine has other, unlabeled uses. It has been used to treat soft tissue sarcomas and malignant metastatic pheochromocytomas. When used with other chemotherapy agents, it has also shown to have some activity in the treatment of non-small cell lung cancer.

Dacarbazine is a non-classical alkylating agent that causes DNA mispairing and strand breakage, leading to cell death (necrosis). Its exact mechanism is not completely understood. It is a cell cycle nonspecific drug, meaning that it causes cell damage and death throughout the life cycle of a cell, and not at any one particular time. When a patient is treated with dacarbazine 50% of the drug is metabolized by the liver, and 50% excreted in urine.

Dacarbazine comes in a vial, and must be mixed with sterile water according to manufacturer instructions prior to administration. It may be given directly into a vein, slowly, or by infusion over a time period of 15 minutes to an hour. Safety and effectiveness of this drug have not yet been established in children.

There are three regimens that may be considered when prescribing dacarbazine for metastatic malignant melanoma: the ten-day, five-day, and one-day regimen. The dosages recommended are as follows: 2-4.5mg/kg/day for ten days, repeated every four weeks; 250mg/square meter/day every five days, and repeated every three weeks; and 850-1000mg/square meters for one day, repeated every three weeks. Because of recently developed drugs called 5HT3 antiemetics that treat nausea and vomiting , the one-day regimen is currently the most commonly used. To date, no studies have indicated that schedule or daily dose affects response rates.

Dacarbazine is usually given in combination with other drugs in the treatment of Hodgkin's lymphoma. The recommended dosage is 150mg/square meter, given once a day for five days. Treatment is repeated every four weeks. Alternatively, the drug may be given on only the first day of treatment, and every 15 days thereafter. For this regimen, the recommended dose is 375mg/square meter.

Anaphylaxis is rarely associated with dacarbazine. Dacarbazine should not be used in patients who have demonstrated previous sensitivity to it.

Dacarbazine is classified as both an irritant, meaning that the drug has the potential to cause pain and inflammation at the site if it seeps out of the vein and into the surrounding tissue. Should this event, called extravasation, occur, hot packs should be applied. Rarely, extravasation of dacarbazine results in tissue damage or death.

Animal studies have indicated that dacarbazine may be carcinogenic and damaging to an unborn fetus It should be used only when the need outweighs the risks There have not been adequate studies to determine whether it does pass to the milk. To be safe, women undergoing treatment with dacarbazine should not breast-feed.

The most common side effect of dacarbazine is moderate bone marrow suppression. White blood cells and platelets are most affected, though red blood cells may also be decreased. These effects are potentially life threatening, requiring frequent blood level monitoring, and potentially a decrease or complete cessation of the drug. These effects may be delayed from two to four weeks after the drug is administered. Patients should be monitored for symptoms of low white blood cell count. Symptoms may include sore throat, burning during urination, diarrhea , or fever . Symptoms of low platelet count may include bleeding, increased bleeding with menstruation, and unexplained bruising. Symptoms of anemia may include dizziness, fatigue , and/or pallor.

Dacarbazine is a highly emetogenic drug, meaning it frequently causes nausea and/or vomiting. Symptoms begin after one to six hours of administration, and can last up to five days. However, with appropriate supportive care, dacarbazine is usually well tolerated. Preventing nausea and vomiting can usually be accomplished by administering antiemetic medications before dacarbazine is administered, and even up to several days afterwards. There are several regimens available. In addition, restricting food intake for several hours prior to the administration of the drug can help reduce adverse gastrointestinal effects.

Dacarbazine has been associated with episodes of low blood pressure that resolve when the drug is stopped. Dacarbazine is prepared in vials with citric acid and the drug mannitol. There is some consideration that these hypotensive episodes may be related to the citric acid, and not the dacarbazine itself.

Although photosensitivity (sensitivity to sunlight) is rare, patients should be instructed to avoid sun exposure after treatment. When outdoors, patients should wear sunscreen and protective clothing. Reactions may include redness, swelling and/or itching of the skin. In more serious cases, blisters may develop.

Dacarbazine may also affect the skin in other ways. For example, it may cause hyperpigmentation of the nails. When used in conjunction with the drugs doxorubicin, bleomycin, and vinblastine, dacarbazine can cause brown streaks to form over the sites of infusion. Dacarbazine may also cause flushing, a temporary redness of the face, neck and chest area. Dacarbazine can also cause hair loss, although uncommon. Once treatment stops, hair growth nearly always recurs.

Dacarbazine is sometimes associated with a flu-like syndrome that causes fatigue, muscle aches, and sometimes an increased temperature. Reportedly, symptoms begin about a week after therapy, and resolve within one to three weeks. Rarely, dacarbazine causes liver toxicity, symptoms of which may include yellowing of the whites of the eyes or skin, abdominal pain and nausea.

Dacarbazine is best administered in Dextrose 5% water or normal saline. It should not be given with the following medications, as they are chemically incompatible: allopurinol sodium, cefepime HCl, Heparin sodium, or piperacillin sodium. Patients should let their doctors know what medications they are taking, as there may be some adverse reactions. Patients at risk for bone marrow suppression, such as those taking dacarbazine, should avoid aspirin-containing medicines as they may increase the risk of bleeding.

—A drug that prevents or alleviates nausea and vomiting.

—A measurement based on height and weight that is calculated in square meters. It is used to determine chemotherapy dosages.

—A substance capable of causing cancer.

—To pass from a blood vessel into the surrounding tissue.

—Referring to proteins that cause growth and maturity in blood cells.

oxford
views updated
dacarbazine (da-kah-bă-zeen) n. a drug administered by injection in the treatment of melanoma and (in combination with other cytotoxic drugs) of other cancers, including Hodgkin's disease. Trade name: DTIC-Dome.

"dacarbazine ." A Dictionary of Nursing . . Retrieved February 24, 2020 from Encyclopedia.com: https://www.encyclopedia.com/caregiving/dictionaries-thesauruses-pictures-and-press-releases/dacarbazine