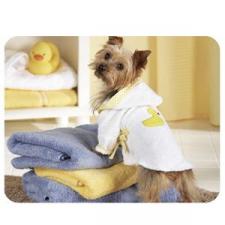 oxford
views updated
bathing To take a bath is both a pleasure and an act of hygiene. It is also an ancient physiological trait shared with other land-mammals who likewise need to groom themselves. When animals bathe, in mud or in water, they are applying a lotion to the skin which eases and moisturizes it; they can also cool or heat the body; clear vermin; heal sores and rashes; remove dirt and other adhesions; and, through the external massaging of the skin given by the bath, produce a sense of well-being to the whole organism. So, bathing has a long bio-history, which underlies the social history of its adoption by advanced human societies: when we bathe, we perform a very simple act which reaches back into our own biological past.

The history of bathing in human groups is therefore all about techniques, and access — where and when and how, rather than why. To find a pond and plunge into it is simple enough; to turn it into a regulated, ritualized, custom, made available to large populations ‘on tap’, is the product of centuries of human endeavour, world-wide. Up until c.3500 bc, when the first urban civilizations appeared, in the valleys of the Lower Tigris and Euphrates, the Indus, and the Yellow River, there is some evidence that the ‘natural virtues’ of bathing were understood and put to use by tribal human groups as part of their primitive ‘techniques du corps’ — their inherited armoury of healing and body care. Several types of ‘folk’ or tribal cultures of bathing still exist today, while others have been found referred to as past custom: such as ‘Finnish’ saunas, and the old Irish/Celtic steam huts; the current Nordic and old Teutonic traditions of cold snow and river bathing; Japanese and Turkish mud baths; the use of hot spas everywhere. Archaeological and anthropological evidence provides proof of the additional religious significance which was, at some point, probably in this period, attached to the use of natural springs as the home of gods and spirits.

Bathing for beauty, power, and status was a refinement of bodily care over and above natural ‘dipping’. The cosmetic arts of bodily decoration, including bathing for the purposes of both purification and anointing, undoubtedly also formed part of the cultures of tribal societies, as shown today amongst surviving neo-Neolithic groups. But a ‘high’ cosmetic culture was a major feature of the new-wealth display of the first ancient civilizations of China, India, Mesopotamia, Egypt, and, later, Greece and Rome. The use of bathing in water of all types and temperatures — with all its associated pastes and pomades, perfumes and powders — reached new heights, and the raw ingredients were an important East–West trade. The legendary bathing of Cleopatra in ass' milk is a folk-memory of this period, and such luxurious cosmetic bathing is part of the image of the ‘exotic’ East. The bathing technologies developed at this stage were those which ultimately spread throughout Western Europe via the Graeco-Roman inheritance.

With the Greeks comes the Western European written ‘discourse’ on bathing (with which we are mainly concerned — the later Indian or Chinese ‘discourses’ undoubtedly took a different path). Most crucially, cosmetics were re-classified by new Greek medical science on both moral and professional grounds, as a lowly sub-division of the medical ‘art of hygiene’. ‘Hygeia’ dealt with complete bodily health through the managed regimen of the six bodily ‘non-naturals’ of air, diet, exercise, sleep, evacuations, and passions of the mind. Bathing was part of exercise, and also assisted the evacuation of the humours. Every part of the regimen was directed by the actions of the four cosmological elements — earth, air, fire, and water — and their correct balance within the body. Thus hot waters heated cold bodily ‘conditions’; and cold waters cooled hot conditions. Warm waters were gentlest, the mean between extremes. The wet–dry axis was also important — the body should be carefully wiped, powdered, or dried out after immersion; dry bodily conditions required more or less rich emollients (oils) in the water and afterwards; dry ‘frictions’ (massage, with a towel) were matched by wet frictions (with loofah or bath brush). Thus bathing was indicated and contra-indicated in various seasons, and at various times of day, as a part of the regimen. The rinsing of the teeth and mouth, and the bathing of the face and hands, was to be performed in the morning; a full body bath was a major operation undertaken before the main meal of the day, with rest and recuperation afterwards, or in the early evening before supper. In classic practice, spring was the time for bathing and blood letting; then the humours rose in the body to be ‘evacuated’ through pores and veins, and were washed away by the bath. Since spring was also the season for sexual play and courtship, the use of the bath also took on more obvious meanings. The uneasy union between the ‘hands on’ empiricism of the old school of barber–surgeons, and the philosophic ‘mind set’ of the new school of physicians is illustrated in Galen's Hygiene, the main classical authority on the use of bathing as therapy which describes both the ‘logos’ (the reasons) and the ‘techne’ (the methods) of bathing, but leaves it to the patient — with or without his professional ‘trainer’, barber–surgeon, and other body servants — to do the manual labour.

The classical (and Eastern) world used bathing freely. It has always been assumed that there was a hiatus after the retreat of the Roman Empire, and the Roman-built baths and spas did certainly fall into decay, presumably because the lifestyle or bathing culture so dear to Roman imperial administrators disappeared. Moreover, bathing culture was more or less disapproved of by the Church as a bodily vanity; but it was not eradicated. The hot spas were re-colonized locally and developed into communal bathing pools, and used for pleasure and for the purposes for they had always been valued — the healing of skin diseases, the easing of paralysed limbs, a hopeful cure for infertility. For similar reasons small public baths or hot ‘stews’, in or near barbers' shops, were apparently widespread in European towns and cities c.1100–1550. The barbers' expertise in bathing was protected by the regulations of Guilds of Barbers, while the City Fathers licensed the trade to ensure public order and to protect the public health. When syphilis and the great plagues appeared in Europe after c.1490 the public bathing trade was effectively decimated, and many baths were closed or their activities severely restricted.

Private bathing, however, has a rather different history. At one level, the ‘simple waters’ (common water without any additives) were available at any water source; and the ‘simples’, the common ingredients of bathing cosmetics, were available in any coutryside — they were made locally everywhere. In theory, anyone could take a bath. In practice most must have taken the ‘strip-wash’ in the bowl in front of the kitchen fire, or the shower outside, according to local conditions. In the end, bathing was a question of economics — time and money. Thus, you could not heat water without any fuel, or labour; you could not store, nor take time out for, preparations. Thus the most elaborate arrangements pertained to the royal or courtly bath culture. Ceremonial bathing and ritual bathing for purification (before knighthood, before marriage) were preserved from ancient antecedents; and the cosmetic royal baths were probably always an occasion. To this was apparently later added the outdoor bath-feast, with guests, food, and music — essentially a bath taken in a decorated water tank ‘au naturel’, in the park or gardens. In the seventeenth-century French aristocratic circles that Georges Vigarello describes, the full toilette was impossible without the bath. Domestic plumbing gradually made its way into the upper chambers of the nobility and gentry, where the bathing sets, knapkins, and perfumiery were kept.

The Protestant Reformation in Western Europe brought cold baths, and a renewed interest in the classical philosophy of hygiene. The eighteenth-century Enlightenment spread the message. The classical texts had been gradually exhumed, and their contents and commentaries spread by books. From the 1650s, throughout Europe, natural spas and mineral waters were classified and chemically analysed. By the eighteenth century, spa doctoring was a recognized branch of the medical profession. From Northern Europe came a form of Cold Regimen: cold-water ‘hydropathic’ bathing, and the development of outdoor spas and coastal resorts. Swimming in the sea became a fashionable hygienic exercise.

During the nineteenth century, bathing moved from being a luxury to being a ‘necessity’. Hydropathy (the science of bathing) flourished — water doctors' developed cold mountain-top ‘hydros’ or spas, hot Turkish baths, fumigating baths, the shower bath. Philanthropy provided hospital baths, factory baths, and public baths and swimming pools; in England the Public Baths and Washhouses Act was passed in 1846. The Soap Tax — used for laundering and the domestic warm bath — was repealed in 1853. In Europe generally at the beginning of the twentieth century a private bath or shower-room was a luxury; by the end of the century, mass cheap private housing and state health policies had (almost) brought one to every home.

See also humours; hygiene; religion and the body; swimming.
The Oxford Companion to the Body COLIN BLAKEMORE and SHELIA JENNETT

Thames Water Plc , Thames Water plc 14 Cavendish Place London W1M 9DJ United Kingdom (071) 636 8686 Fax: (071) 436 6743 Public Company Incorporated: 1989 Employees: 10,… Hydration , Hydration is the process by which water is ingested and absorbed into the body. Given the essential role that water plays in so many bodily processes… Waterborne Infections , WATER POLLUTION. Extensive water pollution in the United States began in the nineteenth century as a result of urbanization, industrial development,… Water Wheel , A waterwheel, also called a water wheel or noria, is a device that uses falling or flowing water to produce power (what is called hydropower). It con… Aqueduct , Aqueducts are structures used to carry water from a supply source to distant areas in need of water. The word aqueduct comes from two Latin words, aq… bottom water , bottom water The water mass that lies at the deepest part of the water column in the ocean. It is relatively dense and cold, e.g. the North Atlantic…