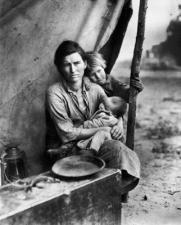 The African-American-owned newspapers that flourished in the United States throughout much of the twentieth century were notable not only for their news content but also for their distinct look: they presented images made by black photographers for black readers, avoiding the stereotypes encountered in many white-oriented publications. One of the photojournalists who shaped this distinct look during the World War II era was Vera Jackson, who was a staff photographer at the California Eagle from 1945 to 1950 and was also active as a freelance photographer for a number of years. Jackson, a pioneer among both female and African-American photographers, captured on film both the glamour of black celebrities and the stirrings of the civil rights movement after World War II.

Jackson was born Vera Ruth on July 21, 1912, in Wichita, Kansas. When she was a child, she was fascinated by a local black newspaper, listening as her father read stories aloud and joining a pen pal club that brought her letters from as far away as Africa. Her mother, Della, died when Vera was five, and she and her father, Otis Ruth, moved to a farm in Corona, California, outside of Los Angeles, in the 1920s. The new environment played a part in opening up the Midwestern girl’s horizons. “Los Angeles was very, very exciting,” she was quoted as saying during a Public Broadcasting System (PBS) program which focused on the black press. “So many people I had never seen before, like the Indians or the Chinese.” Her father, who also collected books, enjoyed photographing family events, and passed his enthusiasm for the camera along to his daughter. She graduated from Corona High School in 1930 and married Vernon Jackson the following year. Soon the couple had two young sons.

During the Depression Jackson took a job as a “Number Please Girl”—a record-store employee who would load songs into a jukebox-like device in response to customer requests. But soon she began to hunger for something more and took a community-education photography class. Inspired, she enrolled in the Frank Wiggins vocational high school’s photography program in the late 1930s. She began to think of photography as a career after her teacher sent one of her pictures to the Los Angeles School Journal and it was printed on the cover. “I didn’t stop after that,” she told the PBS interviewer. “I began to take pictures of everything—babies, children, flowers, anything I could.”

Jackson landed a job as an assistant to photographer Maceo Sheffield and soon began landing freelance work herself. Her work began to appear in the pages of the California Eagle, where she had contacts through a distant cousin who was married to the paper’s charismatic editor, Charlotta Bass. Bass was a famous crusading journalist who became recognized as a leader in the civil rights struggle in the Los Angeles area. But at first Jackson worked more closely with the paper’s society editor, Jesse Mae Brown. “She was about my age and we really hit it off fine and we went to all kinds of things like … fashion shows [and] museums,” Jackson was quoted as saying in the PBS interview.

Hired by the Eagle as a staff photographer in 1945, Jackson attended parties and met many of the famous

African Americans of the day—opera singer Marian Anderson, jazz vocalist Billie Holiday, educator Mary McLeod Bethune, and civil rights activist Ralph Bunche, among others. Two celebrities with whom she developed a special rapport were groundbreaking baseball player Jackie Robinson, whom she photographed with his wife on the occasion of the birth of their first child, and film star Dorothy Dandridge. Several Jackson images of Dandridge portray the actress as a high-fashion beauty. “In order to forget [the] bad times and to look forward to the promise of prosperity and jobs and other opportunities, there was a showiness on the part of most of us,” Jackson was quoted as saying in the book Viewfinders: Black Women Photographers.”

Jackson’s job also brought her up against the harder side of African-American life. In addition to her society beat she also sometimes had to cover hard news and murder scenes. Her work at the Eagle gave her a new appreciation for the activism of Bass, who in the late 1940s was working to dismantle the restrictive covenants—charters that excluded blacks and other minorities from home ownership—that were in force in many Los Angeles neighborhoods. Jackson accompanied Bass to photograph protests at Los Angeles City Hall and at neighborhood sites, and she photographed strikes and other protests. Jackson became a frequent Los Angeles Times letter writer on civil rights matters.

In 1950, at the urging of her husband (to whom she had taught the craft of photography), Jackson left her job at the Eagle and began a new career as a schoolteacher. She earned a bachelor’s degree at the University of California at Los Angeles (UCLA) in 1952, by which time she had already landed a job teaching art at a Los Angeles elementary school. Jackson remained with the Los Angeles school district until 1976, never really pausing in her search for further education. She earned a master’s degree from UCLA in 1954 and did course work toward a doctorate at the University of Southern California. Later in life she traveled to Africa four times and to other countries around the world, and in the 1980s she took art courses at Riverside Community College.

Even after giving up full-time photojournalism, Jackson continued to contribute photographs to various magazines, including Black Angelenos, Travel and Art, and Design. Although Jackson maintained that the purely artistic aspect of her work was secondary to its function of giving the viewer an understanding of the subjects she photographed, her work was often featured in gallery and museum exhibitions, beginning at New York’s La Cinque gallery in 1948 and, in her later years, at such institutions as the UCLA Gallery, the Riverside Art Museum, and the Black Gallery of Los Angeles.

Vera Ruth Jackson has lived long enough to experience recognition for her historic work. In 1997 she was featured in A History of Women Photographers, a major exhibition that traveled to the New York Public Library and the National Museum of Women in the Arts. As curators and interviewers talked to her about her life, Jackson stressed her own enthusiasm for photography rather than a desire to break new ground. “Personally, photography has enriched my life in so many ways,” she told Viewfinders author Jeann Moutoussamy-Ashe. “It is my way of telling the world how I feel about the beautiful experience of living and learning.”