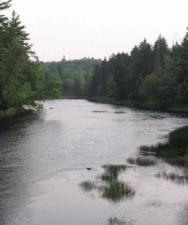 
The Preemption Act, passed in 1841 during the administration of tenth president of the United States John Tyler (1790–1862), was a response to the widespread practice of squatting—illegally settling lands that had not been surveyed and were not yet for sale. During the first three decades of the 1800s the American West received an influx of settlers. The government's system of surveying lands before putting them on the market could not keep up with the demand for property. New arrivals on the frontier simply settled public lands, often building on them and working the land. The Preemption Act exonerated these trespassers by allowing any citizen or any immigrant who intended to become a citizen to purchase 160 acres (64.7 hectares) of public land at the minimum price as long as he had occupied and cultivated the land, and had built a cabin or other dwelling on the tract. This act, combined with Congressional legislation that offered less desirable surveyed tracts at gradually reduced rates, contributed to the settlement of the West and the Old Northwest (the present-day states of Ohio, Michigan, Indiana, Illinois, Wisconsin, and part of Minnesota).