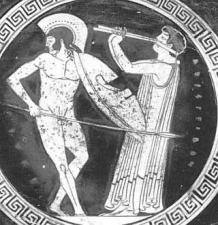 Most of Timon's importance rests upon his reputation as a reporter, but he was also responsible for one or two original twists to the philosophy of his master—Pyrrho. He was a literary virtuoso, composing in a variety of verse forms. Seventy-one fragments of his poetry survive in quotations by later writers, sixty-five of them deriving from one work, the Silloi, a mock-epic series of lampoons in verse. The majority of them deal with philosophers other than Pyrrho, whom Timon attacks with wit and verve, frequently in pointed parody of Homeric verse; but Timon's purpose is to exalt Pyrrho at their expense: "Truly, no other mortal could rival Pyrrho; such was the man I saw, unproud, and unsubdued by everything which has subdued known and unknown alike, volatile crowds of people, weighed down in all directions by passions, opinion, and vain legislation" (Diels 1901, pgs. 8 and 9).

Timon portrays his hero as a superman: "Old man, how and whence did you find escape from the bondage of opinions and the empty wisdom of the sophists? How did you break the chains of all deception and persuasion? You did not concern yourself with what winds pass over Greece, and from what and into what each thing passes" (Diels 1901, p.48).

This philosophical hagiography deliberately recalls that of Socrates (note the rejection of natural science in the last fragment); Pyrrho is presented as a man apart from and immune to the seductive claims of pseudo-knowledge. But in the verse little of genuine philosophical substance is found, apart from the rejection of anything that smacks of dogmatic opinion: dogma unsupportable by persuasive argument, and the implication that such a rejection brings with it tranquillity.

But Timon also wrote prose works and a crucial report of one of them, Pytho, survives in a fragment of the Peripatetic Aristocles (around the first century CE), itself preserved in a text of Eusebius. Timon is reported as saying that anyone seeking happiness should consider these three questions: How are things by nature? What attitude should we adopt toward them? What will be the outcome for those who have this attitude? And he goes on to report (controversially) Pyrrho's answer: Things are indifferent, unmeasurable, and undecidable; neither sensation nor judgment is determinably true or false; and so one should not be opinionated, but be uncommitted and unwavering, saying about everything that it no more is than is not, or that it both is and is not, or that it neither is nor is not. Once accepted, the result is tranquility. In other words, we do not know how things really are; and once we accept that inability, it does not matter. However, Timon's Pyrrho, in contrast with later Pyrrhonians, claimed to be purveying a practical truth, albeit a skeptical one; in his other philosophical poem, Images, Timon writes: "The story of the truth has a correct rule, namely the nature of the divine and the good, from which derives the most equable life for man" (Diels 1901, p. 68).

The same poem contained the line: "the appearance prevails everywhere, wherever it comes from" (Diels 1901, p. 70). Here Timon encapsulates the central tenet of later skeptical philosophy, that one can neither question, nor go beyond, the content of appearances. Again anticipating a skeptical topos, in a work On Sensations, he wrote "that honey is sweet I do not affirm, but I accept that it appears so" (Diels 1901, p. 74).

In these passages, we may perhaps discern Timon's independent philosophizing; and reports in Sextus attribute views to Timon himself rather than via him to his master. In Against the Geometers, Sextus Empiricus attacks geometers on the ultimately Platonic grounds that they assume as firm principles what are in fact mere hypotheses, alluding to Timon's Against the Physicists as saying that one should investigate whether anything should be accepted on the basis of a hypothesis. Sextus gives no context; but the title of Timon's volume suggests that he would not have had the geometrical notion specifically in mind, but rather have been more generally concerned with the epistemic status of allegedly explanatory postulates. In this, too, he anticipates characteristic moves of later Pyrrhonism, in particular that encapsulated in the fourth mode of Agrippa.

Timon also dealt with time. Sextus reports that he argued against the indivisibility of the momentary present on the grounds that "no divisible thing such as becoming or perishing, can come to be in an indivisible time" (Diels 1901, p. 76). Change involves a complex of distinct states: They cannot be squeezed into a partless present. That the present was a punctual; now was a tenet of Aristotelianism; the idea that no change can occur in a punctual present being a feature of Zeno's arrow paradox. Timon's argument was not, probably, very original in content. But it does show him adopting material supplied by the philosophical tradition and turning it to distinctively skeptical ends, something that was itself distinctive of the later skeptical tradition, and apparently unanticipated by anything we know of in Pyrrho. Thus if Timon's argument was unoriginal, the use to which it was put may well not have been. And herein lies his personal contribution to the development of Greek skepticism.