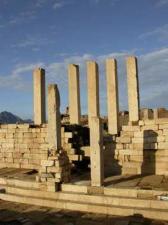 Maʾrib was, until the 1980s, the small government center and garrison of the large, sparsely populated Yemeni province of the same name. The town is located about a hundred miles east of Sanʿa, on the edge of the desert. For centuries before the Common Era, Maʾrib was the capital of the trading kingdom of Saba, once ruled by Bilqis, the Queen of Saba (or Sheba). The fabled Maʾrib dam is nearby, and its monumental remains and those of the vast associated irrigation system are still in evidence. The gradual collapse of these works early in the Common Era forced the depopulation of the region; in the 1960s, the sleepy town that remained was all but abandoned after bombardment during the Yemen Civil War. Since the mid-1980s, however, the town has undergone a major renewal as the center closest to the important oil operations in the Maʾrib/al-Jawf basin; major natural gas reserves also have been discovered. The construction of a new dam in the 1980s, financed by Abu Dhabi, made possible the revival of major irrigated agriculture. All this has also given the area new military significance, especially since much of the province is tribal and beyond the effective control of the state.

Taiz , Province and largest city in the south of North Yemen. Taʿiz Province is, along with Ibb Province, the heart of the Shafiʿi south of North Yemen. It… Ma Yuan , Ma Yüan Ma Yüan Ma Yüan (active ca. 1190-ca. 1229) was a Chinese painter. With Hsia Kuei, he was one of the creators of the Ma-Hsia school of landsca… Fezzan , Fezzan Former province of southwest Libya, with an area of about 213,000 square miles (340,800 sq km). Fezzan was located south of the former provinc… Ipswich , IPSWICH Ipswich lies at the tidal reach of the Orwell estuary, in southeastern Suffolk, on the shortest crossing of the North Sea to the mouth of the… Konya , Konya Large city in central Turkey and capital of Konya province. Konya is located in a large fertile plain in Anatolia. A town has existed on its si… , Rāma is an , RĀMA RĀMA , the hero of the Rāmāyaṇa, an epic of ancient India, is the figure most celebrated in literature, music, and art throughout India and Sout…