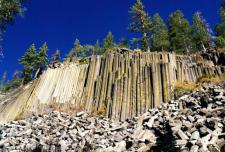 oxford
views updated
joint
1. A discrete brittle fracture in a rock along which there has been little or no movement parallel to the plane of fracture, but slight movement normal to it. Fracture may be caused by shrinkage, due to cooling or desiccation, or to the unloading of superincumbent rocks by erosion or tectonism. A group of joints of common origin constitutes a ‘joint set’ and the joints are usually planar and parallel or sub-parallel in orientation. ‘Joint systems’ comprise two or more joint sets, which are usually arranged systematically with respect to the principal stress axes of regional deformation. Cooling joints (shrinkage joints), such as those which split a rock into long prisms or columns to form ‘columnar joints’, most commonly found in lavas, are due to differential volume changes in cooling and contracting magmas. Unloading joints result from erosional unloading of the crust and form flat-lying, sheet-like joint sets, e.g. those found in granitic rocks.

Double-jointed , double-jointed Some individuals are referred to as being ‘double-joined’. In reality these individuals do not have ‘double’ joints, but have a greate… Osteoarthritis , OSTEOARTHRITIS Osteoarthritis, which is also called degenerative arthritis or degenerative joint disease, is primarily a disease that results from th… Rheumatoid Arthritis , Rheumatoid arthritis (RA) is an inflammatory disease of the joints, the cause of which is still unknown. Infectious factors are being studied, includ… Articulate , ar·tic·u·late • adj. / ärˈtikyəlit/ 1. (of a person or a person's words) having or showing the ability to speak fluently and coherently: an articulat… Joint , joint / joint/ • n. 1. a point at which parts of an artificial structure are joined. ∎ Geol. a break or fracture in a mass of rock, with no relative… Rustication , rustication rustication. In masonry, stone cut in such a way that the joints are sunk in some sort of channel, the faces of the stones projecting bey…