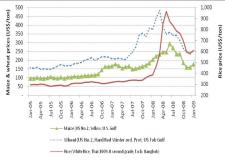 RAILROAD RATE WARS. The rapid expansion after the Civil War added greatly to the number of communities, large and small, served by two or more railroads competing for the traffic between these communities and markets. The fact that many of the points served by competitive railroads were ports intensified competition by involving the water carriers serving the ports.

Competition led to rate cutting by the railroads and water carriers and caused widespread use of rebates. Railroad rebates were special low rates that a railroad carrier charged its favored customers. The intent of a carrier in granting a rebate was usually to discriminate in favor of a particular shipper by giving him a secret rate that was less than that charged his competitors. This practice developed in the mid-1850s and continued because of the spectacular railroad rate wars that took place during the second half of the nineteenth century and that often proved disastrous to carriers and public alike. These costly rate wars led carriers to avoid general rate cuts and to develop the practice of making secret agreements with certain shippers, whereby the shipper would get some form of rate reduction in exchange for his promise to ship his goods over the line offering the concession. Such concessions enabled the favored shippers to undersell their competitors and thus increase their business and the business of the railroad offering the rebates. The public objected bitterly to the practice of rebating because of its obvious unfairness and because the process of building up one shipper at the expense of others promoted the development of monopolies, with all of their attendant evils.

The severity and destructiveness of rate wars was due to several factors: the overbuilding of railroads, the unregulated competition among railroads and between railroads and waterlines, the speculative management of some of these carriers, the inability of the railroads to temporarily suspend service until the excessive competition had abated, and the peculiar ability of railroads or other carriers in impaired financial condition to cause and exaggerate the effects of the rate-cutting contests. These latter carriers were usually bankrupt and had no interest charges to pay. They were not earning enough to pay these charges or dividends on capital stock. Freed of the burden of such charges, they were able to reduce rates in the hope of attracting traffic from their solvent rivals, which were meeting interest charges and sometimes paying dividends. They had little to lose and much to gain either through increasing their traffic and gross earnings or forcing their more vulnerable competitors to yield and divide traffic or earnings.

Railroad rate wars, accompanied by unjust and unreasonable discriminations among persons, communities, and kinds of traffic, led to the development of popular antagonism to railroads after 1870. One result of this popular protest was the enactment by a number of states, particularly the western Granger states, of severe and often restrictive and punitive railroad regulatory legislation and the organization of state regulatory commissions.

Another result of rate wars and their attendant abuses was the demand for federal railroad regulation. The Interstate Commerce Act (1887) prohibited rate discrimination and established a fine of five thousand dollars for each violation; two years later violation of the law was made a penitentiary offense. But it was necessary to prove that a rebate actually resulted in discrimination, and this was difficult to do. Furthermore, juries were reluctant to send men to prison for civil offenses even if proven guilty. Hence the act did not stop the practice of discrimination, and further legislation was necessary. Under the Elkins Act (1903) any departure from a printed rate was considered an offense, thus eliminating the necessity of proving that discrimination existed. At the same time the penalty of imprisonment was dropped, the maximum fine was raised to twenty thousand dollars; the law applied to shippers who received rebates as well as to carriers who granted them. The Hepburn Act (1906) restored the penalty of imprisonment and subjected the receiver of a re-bate to a fine equal to three times the value of the rebates received during the preceding six years. Subsequent acts brought a further tightening of the law.

Hoogenboom, Ari Arthur. A History of the ICC: From Panacea to Palliative. New York: Norton, 1976.

RAILROAD RATE LAW. Attempts to regulate railroad rates by law began at the state level. The so-called Granger laws of the 1870s were passed by the states in response to demands by farmers for lower rates on agricultural products from the Midwest to the eastern seaboard and by midwestern river towns (which had been hurt when river transport was displaced by the new East-West trunklines) that rates be based on mileage. The first demand was satisfied, not by laws but by the striking twenty-five-year decline in all railroad rates after 1873. The second demand was submerged in the economic boom after 1877, but it survived in the durable issue of discrimination in rates between long and short hauls. The Supreme Court,in Munn v. Illinois (1877), affirmed for the right of states to fix interstate rates so long as the federal government did not act. Anticipating the decision in Wabash, Saint Louis and Pacific Railroad Company v. Illinois (1886), which reversed Munn, Congress began studies that culminated in the Interstate Commerce Act of 1887. Support by business groups was broad, including some railroad men who sought the right to enter into legally enforceable agreements—that is, cartels—to pool revenues and/or freights.

The traditional view of the failure of the act of 1887 is that the Interstate Commerce Commission (ICC) was intended to fix specific maximum rates and energetically abolish discrimination between long and short hauls, powers of which it was deprived by two 1897 decisions of the Supreme Court. But neither Congress nor the affected interests had wanted the ICC to fix specific rates, nor did many want a literal application of the clause that prohibited discrimination between long and short hauls. (Although energetic attempts were made under subsequent legislation to abolish this ratemaking practice, they failed because the United States, a vast area in which trade is carried on free of regional barriers, was devoted to a tradition of low through rates arrived at under competitive conditions.) The fatal weakness of the act of 1887 was that it prohibited pooling, even under ICC supervision, an anomaly that led contemporary experts to predict correctly that the only other antidote to rate chaos—consolidation of the railroads into a few systems—would be adopted.

While the Elkins Act of 1903 enhanced the ICC's powers to deal with rebates as criminal acts, it was the overloading of the American railroad system after 1898 that effectively killed rate cutting. Reaction to a stable and moderately rising rate structure resulted in the Hepburn Act of 1906, which gave the ICC power to fix specific maximum rates and broadened its jurisdiction. Before it was fully operative, the Hepburn Act was overshadowed by the Mann-Elkins Act of 1910, which enabled the ICC effectively to freeze rates at levels pervasive in the 1890s throughout the great inflation of the Progressive era, despite repeated concerted efforts by the railroads to raise rates. When the government took over the railroad system in December 1917, the ICC was as far from developing a criterion of "reasonableness" of rates as ever, and literal application of the Sherman Antitrust Act of 1890 had rendered the carriers impotent to operate the system in a unified manner as a war measure. Without consulting either the ICC or the state commissions, the U.S. Railroad Administration raised rates by almost 60 percent, thereby returning them to about the level of the 1890s in real dollars. Meanwhile, in the Shreveport case (1914) the Supreme Court had completed the reversal of the Munn decision by giving the ICC power to set intra-state rates, arguing that they are economically linked to interstate rates.

Neither the power to pool revenues nor the encouragement of consolidation, both features of the Transportation Act of 1920, was germane to postwar regulatory problems. But the power to fix specific minimum rates operated in a totally unforeseen manner. By 1933 the emergence of competition by trucks, which were not federally regulated until 1935, had become the crucial problem. Despite repeated declarations in the acts passed in 1940 and 1958 in favor of a balanced transportation system based on the "inherent advantages" of rail and highway modes, both the ICC and lawmakers shrank from giving railroads freedom to compete through lowering rates, and the Supreme Court failed consistently to enunciate a rule of ratemaking based on cost. As a result the railroads lost most of their profitable, high-class freight and came to be operated at a fraction of capacity; 60 percent of highway freight came to be carried by unregulated private carriers because, under the ICC's policy of high rates for railroads and regulated motor carriers, it was advantageous for the shippers; and the nation's transportation costs thus rose. Despite widespread belief among transportation economists that rate laws had failed, Congress attempted to solve the problem by a system of guaranteed loans, or quasi-subsidies.

Hoogenboom, Ari Arthur. A History of the ICC: From Panacea to Palliative. New York: Norton, 1976.

Yield , Yield In economics and finance the word yield is used to describe the interest rate on a bond. In fact, the words yield and interest rate are used in… Staggers Rail Act Of 1980 , Christopher Zorn Railroads were among the very first industries to be regulated in the United States. The Interstate Commerce Act of 1887, which regu… Interest , Interest Historical aspects of the interest rate Theories of interest BIBLIOGRAPHY Interest is one of the forms of income from property, the other fo… Mann-elkins Act , The authority of the Interstate Commerce Commission (ICC), established 1887 by act of Congress, was later fortified by the Hepburn Act of 1906 and th… PRIME RATE , PRIME RATE The prime rate is the rate of interest, reported as a percentage, charged by commercial banks on short-term loans to the nation's largest,… Interest Rates , An interest rate is a standardized measure of either: (1) the cost of borrowing money or (2) the return for lending money for a specified period of t…