The League of Nations 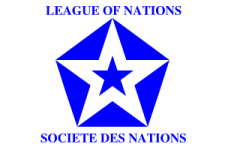 The League of Nations

oxford
views updated
The League of Nations (1919–46) peacekeeping organization began when Woodrow Wilson secured the inclusion of its charter in the Treaty of Versailles (1919).The League's “Covenant” represented the work of many internationalists on both sides of the Atlantic. It contained provisions for the arbitration of international disputes, the reduction of armaments, and for the imposition of collective military and economic sanctions against any nation that violated the political independence and territorial integrity of another (Article X).

The Covenant, like all constitutions, was subject to interpretation. Two competing tendencies existed in the American internationalist movement, both born of the politics of neutrality and preparedness of 1915–16. “Progressive internationalists” considered peace essential to the cause of domestic reform. Like Wilson, they saw European imperialism, militarism, and balance‐of‐power politics as the root causes of the war; in their stead, they promoted the idea of a “community of nations,” to be sustained by a league.

Conservative internationalists, led by William Howard Taft and the League to Enforce Peace, also advocated a world parliament; but, while more or less endorsing the principle of collective security, most of them believed that the United States should expand its army and navy and reserve the right to exercise force independently. Disarmament and self‐determination were not among their concerns. Progressive internationalists viewed their conservative rivals as enemies of reform and as advocates of militarism. The two sides disagreed over domestic politics and foreign policy alike.

Had a national referendum been held in July 1919, the United States almost certainly would have joined the League. Two main factors, however, compounded the problem of ratifying the treaty. First, the Republicans, having captured majority control of Congress in the 1918 midterm elections, launched a fierce attack on Wilson's overall program. Second, large numbers of progressive internationalists had begun to abandon Wilson because the peace settlement had fallen short of the promised Fourteen Points; moreover, his acquiescence in the wartime suppression of civil liberties had further eroded his support among progressives.

As for the Senate itself, the preponderance of opposition was grounded in both partisanship and ideological principle, though only a few of the League's critics were irreconcilable isolationists. In part to preserve America's freedom of action, the Republicans, led by Henry Cabot Lodge, drew up fourteen reservations as conditions for ratification. Some of these reservations would have undermined the League's ability to arbitrate disputes, to supervise a reduction of armaments, and to impose sanctions embodied in Article X. In September, Wilson embarked upon a strenuous speaking tour on behalf of unqualified American membership. His exertions brought on a nearly fatal, paralytic stroke that rendered him a recluse. Political gridlock then ensued.

The Senate roll was called three times, in November 1919 and March 1920; but whether on a motion to ratify unconditionally or with the Lodge reservations, the necessary two‐thirds majority could never be mustered. In November 1920, the Republican Warren G. Harding won a landslide victory over Democrat James M. Cox. Alluding to Wilson's erstwhile wish that the election might take the form of a referendum, Lodge now declared, “that League is dead.”

Some historians have argued that Wilson's stroke prevented him from striving for the middle ground on the question of reservations. Other historians maintain that even a healthy Wilson would have refused to compromise, owing to his personality. Still others have stressed that the ideological gulf that separated the two branches of American internationalism, along with the president's failure to rekindle his own progressive coalition just as the parliamentary struggle began, sealed the fate of a Wilsonian league.

At least in part because of the absence of the United States, the fledgling organization boasted few achievements in the interwar period. Republican administrations assiduously avoided all formal association with it throughout the 1920s, even, for example, when promulgating the Dawes Plan of 1924, the effort to compose Europe's reparations–war debt tangle. Yet, in this endeavor, the League undoubtedly facilitated Secretary of State Charles Evans Hughes's labors. Then, too, Hughes staunchly (if ineffectively) advocated American membership in the World Court. The United States further underscored its ambivalence in the salutary achievement of the Washington Naval Conference of 1921–22 as well as in the innocuous Kellogg‐Briand Pact of 1928; in both instances of internationalist foreign policy, the Americans conspicuously ignored the League. Perhaps the final blow came during the Manchurian incident of 1931–32. While condemning Japanese aggression there, the League proved utterly powerless to undertake effective sanctions; the United States merely refused to recognize Japan's puppet state, Manchukuo. During the 1930s, the League receded further into impotence as mounting crises led to renewed international conflict.

By 1944–45, many Americans had concluded that World War II might have been averted had they followed Wilson's counsel. Franklin D. Roosevelt successfully championed a new international organization, the United Nations, whose Charter incorporated many of the reservations prescribed by the Republicans in 1919. Although the United States took the lead in founding the United Nations in 1945, American foreign policy makers deemed it an inadequate instrument and they created regional alliances, particularly NATO, as the means of collective security.
[See also Isolationism; Washington Naval Arms Limitation Treaty; World War II: Causes.]

League of Nations, the

oxford
views updated
League of Nations, the an association of countries established in 1919 by the Treaty of Versailles to promote international cooperation and achieve international peace and security. Although the League greatly assisted post-war economic reconstruction, it failed in its prime purpose through the refusal of member nations to put international interests before national ones, It was powerless to stop Italian, German, and Japanese expansionism leading to the Second World War, and was replaced by the United Nations in 1945.

ELIZABETH KNOWLES "League of Nations, the ." The Oxford Dictionary of Phrase and Fable . . Encyclopedia.com. 28 Jan. 2020 <https://www.encyclopedia.com>.

ELIZABETH KNOWLES "League of Nations, the ." The Oxford Dictionary of Phrase and Fable . . Encyclopedia.com. (January 28, 2020). https://www.encyclopedia.com/humanities/dictionaries-thesauruses-pictures-and-press-releases/league-nations

ELIZABETH KNOWLES "League of Nations, the ." The Oxford Dictionary of Phrase and Fable . . Retrieved January 28, 2020 from Encyclopedia.com: https://www.encyclopedia.com/humanities/dictionaries-thesauruses-pictures-and-press-releases/league-nations

Harold Wilson , James Harold Wilson The English statesman Harold Wilson (1916-1995), who served as prime minister and leader of the Labour party, was one of the most… Colin Wilson , Wilson, Colin BORN: 1931, Leicester, England NATIONALITY: British GENRE: Fiction, nonfiction MAJOR WORKS: The Outsider (1956) Ritual in the Dark (196… International Security , Roland N. Stromberg Collective security may be defined as a plan for maintaining peace through an organization of sovereign states, whose members ple… Edmund Wilson , The American critic Edmund Wilson (1895-1972) pursued an independent course that secured him respect and eminence. Edmund Wilson was born in Red Bank… Pete Wilson , Pete Wilson Pete Wilson Republican Peter Barton Wilson (born 1935) was elected the governor of California in 1991. As governor of the most populous a… Woodrow Wilson , Woodrow Wilson Arthur S. Link THOMAS WOODROW WILSON, twenty-eighth president of the United States, is the only chief executive who has given scholarl…

The Lady of Shalott
The Kronos Quartet
The Kroger Company
The Klezmatics
The Killers
The Juilliard School
The Jazz Singer
The Jayhawks
The Interpublic Group of Companies Inc
the Internet
The Indo-European Family of Languages
The Illuminati
The Hoover Company
The Home Depot Inc
The Hockey Company
The Hertz Corp
the Hebrides
The Hearst Corp
The Hartz Mountain Corp
The Great Society
The Great Atlantic & Pacific Tea Company, Inc.
The Grateful Dead
The Grapes of Wrath
the Grampians
The Gorman-Rupp Company
The League of Nations
The Legend of the Invisible City of Kitezh
The Limited Inc
The Lonely Crowd
The Longaberger Company
The Lubrizol Corp
The Manhattan Transfer
The Marmon Group
The Matrix
The Mavericks
The May Department Stores Company
The McGraw-Hill Companies Inc
The Mead Corp
The Mekons
The Mens Wearhouse Inc
The Meters
The Misfits
The National Park of American Samoa
The New Republic
The New York Times
The Nikko Securities Company Limited
The Nitty Gritty Dirt Band
The North Face Inc
The Oak Ridge Boys
The Occult
The Odyssey