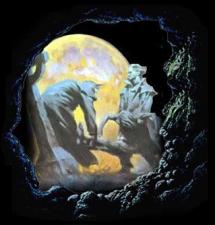 oxford
views updated
body snatchers Between the Tudor era and the early nineteenth century, the only legal source of corpses for dissection was the gallows. Not enough bodies were provided to supply the proliferating number of anatomy schools and their burgeoning numbers of students. Body snatchers (‘grave-robbers’ or ‘resurrection men’) generally obtained fresh corpses from new graves. Their work was crucial to the historical development of anatomical knowledge and expertise, particularly during their heyday, from the 1780s to 1832. After this the Anatomy Act changed the legal basis of corpse provision.

The earliest grave-robbers were surgeon– anatomists or their pupils. Apprentices' indentures issued by the Edinburgh College of Surgeons in the 1720s forbad trainees to exhume the dead — which suggests that they had been doing so. A contemporary book referred with heavy irony to ‘resurrections’ by the London Corporation of Corpse Stealers in a number of churchyards. Great museums of medical specimens were being established during this era, and, as with natural history collections, private auctions provided a form of brokerage by which owners could exchange specimens of human origin. Surgical exams at first tacitly, and later openly, recognized that bodies were being procured beyond legal means and dissected in unofficial premises.

Accurate estimates of the demand are difficult to come by. The first period for which figures are available is the early nineteenth century, when 700 medical students were enrolled annually in London alone, each of whom expected to engage in hands-on dissection on three or more corpses.

Until the 1830s, dissection was considered by law a fate worse than death, a ‘further Terror and peculiar Mark of Infamy’ to public execution itself — to be inflicted upon the worst of murderers. Only beheading; hanging, drawing and quartering; or burning alive exceeded it in severity. There was a widely held belief in some incorporeal association between the fate of the corpse and that of the soul. Dissection mutilated and dismembered the body, and was specifically designed to deny the wrongdoer a grave: in popular belief the spirit denied this repose was doomed to wander, and its future resurrection was in doubt.

The public viewed dissection with terror. Body snatching was greatly feared, and inflicted profound psychological pain upon surviving relatives and friends. Corpses were most desired by the anatomists, and most lucrative to the body snatchers, at their freshest: at the time mourners were experiencing raw grief. Entire communities, on hearing a rumour of body snatchers at work, would repair to the graveyard to dig for their relatives. Severe violence against body snatchers, riots, and even the demolition of anatomy schools could result.

Watchmen, sometimes with guns and dogs, were employed by local inhabitants to protect their dead. Many burial grounds had extra security features. In poor districts, coffins were buried in stacks, reaching almost to the surface, and ordinary folk could do little to protect their dead, other than to make things difficult for the body snatchers. People would delay burial, mix straw with the earth returned to the grave to hinder the body snatchers' shovels, or share stints of watching at the graveside. The rich could purchase better security. Any means by which burial could be made more secure was sure to find a ready market. Better quality coffins were described as ‘stout’, and extra coffin nails became a status symbol. Double and triple coffins, and lead coffins, became popular. Ingenious inventors devised and patented special coffin bands, locks, screws, and even cast iron coffins. Yet the wealthy remained vulnerable. Body snatchers were extremely efficient. Sir Astley Cooper, a leading Regency surgeon–anatomist, confidently stated in 1828 that if he was so disposed he could obtain the body of anyone — whoever they were, and of whatever station in life: ready money was always the key.

Prices were affected by market-wide considerations — as when good weather rendered mortality lower than expected — and by local conditions. For example, increased vigilance in one locality could cause greater expense in obtaining corpses from another. Corpses lost value swiftly due to the lack of adequate preservatives: pickling, salting, and other forms of preservation known from food use were used, but neither refrigeration nor formaldehyde had yet been developed, and prices were seasonally variable. An average adult corpse in good condition yielded an average price, one damaged by autopsy or amputation had considerably lower value. Rising demand, and sometimes severe shortages, caused prices to fluctuate, but the general drift was upwards. In the 1790s, one London gang was said to have been selling adult corpses for ‘two guineas and a crown’, children's bodies were sold by the inch: ‘six shillings for the first foot, and nine [pence] per inch for all it measures more in length’. In the 1820s, when the trade was more difficult, adult corpses cost between ten and twenty guineas apiece.

Collectors paid much greater sums for medical curiosities. In one rare but well-known case in the 1780s, the anatomist John Hunter paid the enormous sum of £500 for the corpse of the ‘Irish Giant’, whose huge skeleton is still displayed in the Royal College of Surgeons' Museum in Lincoln's Inn Fields, London.

Body snatchers usually worked at night. Daytime reconnaissance informed them of fresh burials, depth, and whether more than one body might be obtained by one spate of digging. Their tools were simple: wooden shovels to lessen noise, a rope with hooks or a crowbar to pull up the coffin lid, and a couple of sacks. A hole would be dug at the head end of a fresh grave; the soft soil would be removed and heaped on sacking. Once visible, the coffin lid would be forced. The weight of earth on the rest of the coffin served as a counter-weight, so when pressure was applied the lid would break across, and the body pulled out. Shrouds or other clothing on the body would be thrown back, and the earth replaced by tipping up the sacking. It was important to leave the grave tidy: if suspicions were aroused future attempts upon the same graveyard could meet with danger. A look-out would be waiting outside with a cart.

In times of dearth, body snatchers would try other sources: country churchyards further afield would be raided if they were on good communications routes — road, canal, or sea. Private vaults were entered secretly, by bribery or force. Bodies were imported from France and Ireland in casks. Body snatchers posed as grieving relatives at public mortuaries, or stole bodies awaiting inquest.

In law, the body did not constitute property and could therefore neither be bought, sold, or stolen. Body snatchers were convicted, however. A husband and wife, for example, were transported for the theft of grave clothes. Body snatchers generally took the brunt of popular obloquy and judicial punishment for grave-robbery, but the prosecution and conviction of an anatomist in the spring of 1828 — for unlawfully conspiring to obtain and receive a body — effectively incriminated anatomical enquiry, and at last caused Parliamentary action.

The Select Committee on Anatomy recommended the requisition of the bodies of individuals dying in workhouses or hospitals, too poor to pay for their own funerals. Despite opposition, these findings were eventually embodied in the Anatomy Act of 1832. Grave-robbers were rendered redundant by a new breed of body snatcher: the mortuary attendant. Although dissection lost its association with execution for murder, this now adhered to the shame of a death in poverty. It is only in the NHS era that donation has become the major source of corpses for anatomy.

Yet another version of “Invasion of the Body Snatchers.” An innocent family arrive at an Army base which turns out to be infested with pod people. This time around the heroine is angst-ridden teenager Marti (Anwar) and the pods have something to do with a mysterious toxic spill. The 1978 remake was well done; this so-so version takes advantage of the advances in special effects (particularly in Anwar's bathtub scene) and sound technology but is slow-paced with few jolts of terror. 87m/C VHS, DVD . Gabrielle Anwar, Meg Tilly, Terry Kinney, Forest Whitaker, Billy Wirth, R. Lee Ermey, Reilly Murphy; D: Abel Ferrara; W: Stuart Gordon, Den- nis Paoli, Nicholas St. John; C: Bojan Bazelli; M: Joe Delia.

Dissection , dissection of the human body is the act or art of cutting open the body in order to display and study the topographical anatomy and structure of its… Arthropoda , An arthropod is an invertebrate (an animal without a backbone) that has jointed legs and a segmented body. Arthropods are the world's oldest creature… Body-marking , body mutilation and markings One of the key aspects of human embodiment is the physical frailty of the body in relation to the environment it inhabit… Ambulance , An ambulance is a self-propelled vehicle specifically designed to transport critically sick or injured people to a medical facility. Most ambulances… Vitality , vitality •banditti, bitty, chitty, city, committee, ditty, gritty, intercity, kitty, nitty-gritty, Pitti, pity, pretty, shitty, slitty, smriti, spitt… Astral Body , An exact replica of the physical body but composed of finer matter. The term is chiefly employed in Theosophy, and those numerous occult systems deri…