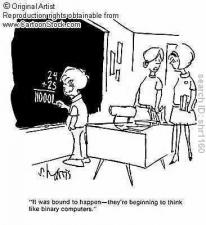 oxford
views updated
computer language System of words and rules used to program a computer. Most computers work using a binary-coded language (using 1s and 0s) called machine code. A language consisting of words and symbols that relate more directly to normal language can be used to instruct a computer. A compiler, assembler, or other such program then translates this into machine code. Several kinds of programming language have been designed for different purposes. Fortran is for scientific and mathematical use, COBOL (Common Business-Oriented Language) for business programs, Algol for mathematical applications, and BASIC and Pascal were originally for use by learners. Today, the majority of applications for personal computers are written in a language called ‘C’, or derivatives of it.

Formal Language , formal language 1. A language with explicit and precise rules for its syntax and semantics. Examples include programming languages and also logics su… Fortran , FORTRAN (FORmula TRANslating) is a programming language historically used in math, science, and engineering programs. It is recognized as the first h… Computation , Computation Older methods General-purpose digital computer Error analysis BIBLIOGRAPHY In recent years there has occurred enormous technological deve… Programming Language , In order for computers to accept commands from humans and perform tasks vital to productivity and e-commerce, a means of communication must exist. Pr… Digital Computer , A digital computer is a programmable device that processes information by manipulating symbols according to logical rules. Digital computers come in… Cobol , Cobol COBOL (COmputer Business Oriented Language), is a programming language used in many different business applications, both on mainframe computer…