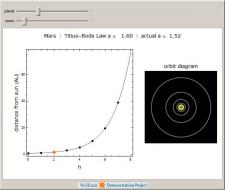 oxford
views updated
Titius-Bode law (Bode's law) An empirical arithmetical relationship between the distances of the planets from the Sun. If the Sun-Earth distance is taken as 10, then the distances of Mercury, Venus, Earth Mars, Jupiter, and Saturn are approximately satisfied by the sequence: 4, 4 + 3, 4 + 6, 4 + 12, 4 + 48, and 4 + 96. The more accurate version of the ‘law’ is given by the function rn = ABn, where rn is the distance of the nth planet, A is a constant, and B = 1.73. This version is due to Mary Blagg (1858–1944). It is not clear that the ‘law’ has any fundamental significance, but may be merely a consequence of gravitational and tidal evolution following planetary and satellite formation. The asteroid belt occurs about 4 + 24, corresponding to the former ‘missing planet’ in the sequence, that was believed to exist for many years. Uranus, discovered in 1781, occurs close to the next term, 4 + 192, but the position of Neptune does not fit the ‘law’. The regular satellites of the giant planets fit modifications of the ‘law’. The ‘law’ was discovered in 1766 by J. D. Titius (1729–96) and was popularized by J. E. Bode (1747–1826).

Distance , DISTANCE One of the well-recognized benefits of science and technology is that they reduce distance across both space and time. Science looks back in… Law Of Faunal Succession , law of faunal succession The principle, first recognized at the beginning of the 19th century by William Smith, that different strata each contain pa… Astronomical Unit , An astronomical unit (AU) is a unit of length that astronomers use for measuring distances such as orbits and trajectories within the solar system. O… Bodes Law , Bode's law [for J. E. Bode], also known as Titius's law or the Titius-Bode law, empirical relationship between the mean distances of the planets from… Sir William Blackstone , Sir William Blackstone Sir William Blackstone The famous English jurist Sir William Blackstone (1723-1780) is remembered for his Commentaries on the… By-law , by-law, bye-law A. local law or custom established by common consent XIII; B. ordinance regulating internal matters made by a local authority or corp…