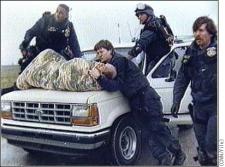 Public interest in the Branch Davidian movement reached unprecedented heights during the prolonged and ultimately violent standoff between federal authorities and the cult's members in the late winter and early spring of 1993. The Branch Davidian movement dates back to 1929, when Victor Houteff and his followers split off from the Seventh-Day Adventists. The Davidians moved to Mt. Carmel near Waco, Texas, in 1935. After Houteff died in 1955, a succession of leaders controlled the Davidian movement. In 1988 Vernon Howell, who later changed his name to David Koresh, became the movement's new leader.

Under Koresh's leadership, there was a heightened "sense of living in the end of time" (Bromley and Silver 1995, p. 56). Many researchers feel that Koresh saw the events in the New Testament book of Revelation as already unfolding. In Koresh's teachings, he became a central figure in human-kind's future: He viewed the Branch Davidians as being responsible for the salvation of people living after Christ's crucifixion (Bromley and Silver 1995; Tabor 1994).

After years at Mt. Carmel, the Branch Davidians suddenly attracted the attention of law enforcement officials. Child-abuse allegations fueled interest in the group. As clinical child psychologist Lawrence Lilliston noted in 1994, it was easy for the public to believe the child-abuse allegations given society's dim view of people who join groups like the Davidians. Another motivation for such allegations involved child-custody disputes that arose when one parent either left the movement or was never a member, according to the sociologists Christopher Ellison and John Bartkowski. Stories in the media alleging abuse abounded; however, Ellison and Bartkowski report that the media made these charges based on anecdotal evidence. Lilliston noted that there was little substantive evidence; in fact, an investigation by Protective Services in Texas turned up no evidence of abuse. However, Bromley and Silver report that Koresh did have sexual relationships with minors; furthermore, Koresh allegedly "avoided recording paternity on some birth registration forms, apparently to deflect official inquiries about the group's sexual practices" (p. 64).

Notwithstanding the authenticity of the child-abuse charges, they were not grounds for involvement of the Bureau of Alcohol, Tobacco, and Firearms (ATF) because such investigations do not fall under federal jurisdiction. Nevertheless, the ATF chose to investigate these charges while also listing illegal weapons as a justification for their involvement; however, the legitimacy of the weapons charges were also disputed.

Federal agents raided Mt. Carmel on February 28, 1993. A year later, according to Moorman Oliver, a retired criminal investigator who specialized in gang and cult affairs, the scene was chaotic and left questions unanswered regarding the actions of both parties. Perhaps the biggest controversy involves who fired the first shot. The accounts from the federal agents and the Branch Davidians differ on this issue, with both sides maintaining their innocence. When it was over, the raid left four federal agents and six compound residents dead, with Koresh suffering nonfatal injuries.

After the initial raid, a fifty-one-day standoff ensued. Federal agents made life difficult for compound residents—electrical service was shut off, medical care was denied, and grating noises were constantly broadcast over loudspeakers.

Nevertheless, the Branch Davidians remained in Mt. Carmel. James Tabor, a professor of religious studies who worked with federal agents during the standoff in an attempt to help them understand the belief system of the Branch Davidians, noted that the people inside the compound "were willing to die for what they believed, and they would not surrender under threat of force" (1994, p. 15). Tabor felt that Koresh believed he was living the events of Revelation. He felt that God had instructed them to wait inside until, at the end of the waiting period, they were to be killed by the federal agents. After continued pressure to end the standoff, Koresh informed agents that "he had been instructed by God to write an exposition expounding the secrets of the seven seals of Revelations" (Tabor 1994, p. 18). Upon completion, he promised to turn himself over to the authorities; however, agents thought Koresh was stalling.

On April 19, 1993, federal agents stormed Mt. Carmel, citing poor conditions within the compound as their motive. Tanks bashed holes in buildings in order to deliver tear gas. Eventually, the compound was engulfed in fire, though the cause of the fire has been debated. Federal agents felt certain that cult members started the fires in an attempt to commit mass suicide. Another possible source for the fires that has been proposed involves lanterns being overturned by the tanks during the delivery of the tear gas (Lewis 1994; Oliver 1994). An official arson investigation into the cause of the fires blamed the Branch Davidians; however, the government's decision to bulldoze the compound immediately after the investigation has been criticized by some because it prevented any further inquiries based on physical evidence into the cause of the fire (Lewis 1994). Former Senator John Danforth completed a fourteen-month investigation into the events at Waco in 2001. In his testimony before the Senate Judiciary Committee, he reported that the FBI was not responsible for the fires that ultimately killed seventy-four Branch Davidians, including twenty-one children.

Despite the findings of the arson investigation and the investigation by Danforth, some scholars do not agree with the conclusion that the Branch Davidians started the fires. Susan Palmer, an expert on religious suicides, feels that the mass-suicide explanation does not fit the evidence. Survivors of the fire "insist that there was no suicide pact" (p. 104). Furthermore, there were no suicide rehearsals, and there seemed to be no evidence of speeches by Koresh "exhorting martyrdom" (p. 107). Her analysis of the events points to mistakes made by federal agents as the likely cause of the Waco tragedy. A definitive answer regarding whether the fires resulted from mass suicide or from some form of ghastly accident may never be known.

Oliver, Moorman, Jr. "Killed by Semantics: Or was It a Keystone Kop Kaleidoscope Kaper?" In James R. Lewis ed., From the Ashes: Making Sense of Waco. Lanham, MD: Rowman & Littlefield, 1994.

Tabor, James D., and Eugene V. Gallagher. Why Waco? Cults and the Battle for Religious Freedom in America. Berkeley: University of California Press, 1995.

Accelerant , Skip to main content Accelerant accelerant •abeyant, mayn't •ambient, circumambient •gradient, irradiant, radiant •expedient, ingredient, mediant, ob… Federal Bureau Of Investigation , The United States Federal Bureau of Investigation (FBI) is the nation's primary federal investigative service. The mission of the FBI is to uphold an… Fire Ecology , Ecology, Fire Fire has been an agent of change in nearly every terrestrial vegetation type on Earth, shaping both the species composition and structu… Child Abuse , Definition Child abuse is a blanket term for four types of child mistreatment: physical abuse, sexual abuse, emotional abuse, and neglect. In many ca… Tabun , Tabun (or "GA") is one of a group of synthetic chemicals that were developed in Germany during the 1930s and 1940s. (Tabun was developed in 1936.) Th… Independent Counsel , Before 1988, independent counsel were referred to as special prosecutors. In 1988, Congress amended the ethics in government act of 1978 (Ethics Act)…