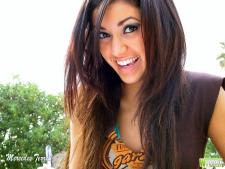 Southern-bred, Hollywood-based singer-songwriter Charlie Terrell—known simply as Terrell—has produced exceptional examples of roots rock music since the early 1990s. But over the course of a decade, his work went largely unnoticed, barely registering on the music scene despite major-label distribution. The lack of mainstream attention perhaps is because Terrell possesses qualities that separate him from other rock musicians. Extremely literary, he often writes songs in the spirit of his favorite authors: William Faulkner, Henry Miller, and Jack Kerouac. Musically, Terrell rocks hard, but also incorporates elements of Southern folk and blues.

Through all the ups and downs, Terrell views his journey as a musician as a personally fulfilling experience. “I got to meet John Lee Hooker, Tom Waits and Joni Mitchell once said my name,” recalled Terrell for an online interview, “but there is nothing better than simply writing a simple song and having good musicians bring it to life. The magic of creation is the fight against death.”

Born Charles Allen Terrell on March 15, 1961, in Birmingham, Alabama, Terrell enjoyed an interest in art, literature, and music throughout his childhood. However, as the son of fiercely religious parents who practiced both Southern Baptist Fundamentalism and Episcopalian Protestantism, he found himself constantly forced to balance such pursuits against his family’s values. At age eleven, he received his first guitar as a gift from his grandmother and began making up his own songs soon thereafter. Throughout high school, Terrell played in various bands and honed his songwriting skills.

Upon graduating, Terrell moved to Nashville, Tennessee, to attend a Baptist college. While studying to become a preacher, though, the lure of music proved greater than that of his religious pursuits. Consequently, he spent most of his time at the campus recording studio and ended up dropping out of school after a couple of years. Remaining in the Nashville area, he took a day job, continued to write music, played in local bars as part of a guitar-harmonica duo, and recorded an EP.

After a few years, Terrell wanted to leave the South and move to Los Angeles. Short on money to finance the move, he volunteered for medical experiments at Vanderbilt University. Over the course of a week, he endured the discomfort of a tube running through his nose and down into his intestines. “I had to eat while lying on my side,” he stated for his official website biography. “I also had an IV bottle mounted on a rolling stand—my stand was like a broken shopping cart—all the wheels going in different directions. It was hilarious. In the morning, while I watched the Andy Griffith Show, the nurses came in and jammed needles into the top of my hand to see what the chemicals did to my body.” His payment for subjecting his body to the treatment amounted to $600, just enough to pay his way to California.

In 1988, Terrell arrived in Los Angeles, assembled a band, and began playing gigs at local clubs. In a short time, he caught the attention of music industry heavy weights like Miles Copeland, who offered to manage Terrell’s band, and Irving Azoff, who signed Terrell to his label, Giant Records. Suddenly, Terrell believed all his dreams had come true. His debut album, On the Wings of Dirty Angels, appeared in 1990 to a great critical response. Straight-ahead rock featuring Jim Phillips on electric guitar, the record revealed one good song after another—“Shouting Ground,” “Subterranean Homesick Blues,” “Right Outside,” “Women,” and “Georgia O’Keefe,” a live-performance favorite.

Unfortunately, On the Wings of Dirty Angels did not take flight, and Terrell’s tour in support of the album ended abruptly when the band’s gear and van were stolen in Dallas, Texas. To make matters worse, Terrell and Copeland had a falling out. As Terrell wrote, “Everything atomized after that. The band fell apart. My best friend became a junkie. My A&R man died of AIDS. I was dropped from the label and my fiancée kicked me out of the house. I swam around L.A. for three or four years, lost everything, and ended up living in my car or pounding on apartment doors at 3 am, drunk, begging for a couch to sleep on.” With his life in shambles, Terrell managed to exist by painting portraits and selling his artwork. He also worked as a band roadie for a group called the Red Devils.

Began playing guitar and writing songs at age 11; moved to Nashville to study to become a preacher; relocated to Los Angeles, CA, 1988; released debut album On the Wings of Dirty; Angels on Giant Records, 1990; signed to Virgin Records’ Pointblank label, 1994; released Angry Southern Gentleman, 1995; released Beautiful Side of Madness, 1996; recorded Taking the Jesus Pill, based on his own short story, 1997; formed Daddy Van Records, released Three Links in a Broken Chain, dedicated to a friend (Hawk) who died of a drug overdose, 1999.

In 1994, Terrell’s fortunes improved. One night while playing at a local Irish pub, his music caught the attention of John Wooler, the head of Virgin Records’ blues imprint Pointblank. Three days later, he signed Terrell to a record deal. Assimilating a new band, Terrell recorded his second album, Angry Southern Gentleman in 1995, which detailed his migration from the Deep South to Nashville to the West Coast. Exploring blues, country, and folk, Terrell also incorporated acoustic bass, dobro, and violin into the musical mix. It, too, featured standout songs like “Dreamed I Was the Devil,” “Blacktop Runaways,” “Toystore,” and “Come On Down.” Terrell and his band, the Vibe Assassins, then toured across the United States and Europe before returning home to work on a new album.

At this point, according to Terrell, he was beginning to come apart mentally, as the business side of music had taken its toll. Immediately after touring, he headed back into the studio and recorded Beautiful Side of Madness, a record filled with anger and frustration. Released in 1996, the harder, edgier album nonetheless saw Terrell at his most compelling, closing with the title track, a stunning duet with singer-songwriter Joan Osborne. Other notable tracks included “Pour Our Souls Together, ““Whitley Flats,” and “Hollywood Drag.”

In the first few months of 1997, Terrell began working on his next project, Taking the Jesus Pill, based on a short story (available on his website) he wrote about a Southern girl who runs away from her abusive father, a preacher, and ends up living in New Orleans with a shady character named Johnny 3:16. “It’s the classic Southern Gothic,” explained Terrell for his website. “I wrote a series of songs as a kind of ’soundtrack’ for the short story and it eventually evolved into a full blown stage play.” Although he recorded these songs onto an album in the spring of 1997, Pointblank was uninterested in releasing it. Terrell planned to issue Taking the Jesus Pill on his own label in 2001.

In 1999, Terrell released Three Links in a Broken Chain on his own Daddy Van Records. The album is a tribute to his estranged friend, Hawk (Richard Smith), who died of a drug overdose in the summer of 1998. The entire album was cut live with very few overdubs and completed within three days. His most personal record, Three Links in a Broken Chain was recorded with the Vibe Assassins and special guests.

Beautiful Side of Madness, Pointblank/Virgin, 1996.

Taking the Jesus Pill: The World of Charlie Terrell, http://www.jesuspill.com(March 7, 2001).

Jay Farrar , Wilco Alternative country group For the Record… Selected discography Sources When the progressive country band Uncle Tupelo broke apart in 1994, one… Velvet Crush , Velvet Crush Pop band For the Record… Selected discography Sources A melodic power-pop trio in the same vein as Matthew Sweet, the Smithereens, and t… Bob Mould , Bob Mould Singer, songwriter, guitarist Set Land Speed Records With Hüsker Dü Stardom and Self-Destruction Worked to Exorcise Demons of Spirit Reopen… Everclear , Everclear Everclear Rock band Everclear’s Art Alexakis was quoted in Spin as saying, “When I try to get complex in my songs, I sound stupid. When I w… Prong , Prong Rock band For the Record … Selected discography Sources In the late 1980s, New York’s Prong hit the scene with a vengeance, blending their own… Ryan Cabrera , Cabrera, Ryan Singer, songwriter, musician In the mid-2000s there was a slew of young musicians climbing their way to the top of the music charts. So…